Hundreds of Armenians came to Turkey yesterday through Georgia ( the Turkish-Armenian borderline is closed for a century) in order to visit a historic Armenian church in Lake Van, Turkey. The Church of the Holy Cross, is situated in the small island of Akdamar and is a symbol of the Armenian Genocide of 1914.

The church is also a sign of the flourishing Armenian community that lived in the Ottoman Empire. 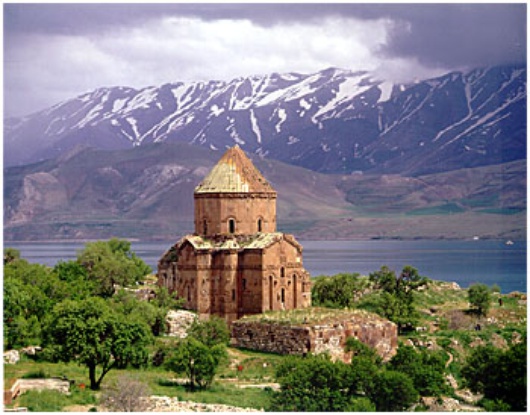 The Armenian Church of the Holy Cross in Lake Van.

The church was restored in 2007 and yesterday the first Gregorian Divine Liturgy took place. This is the second move made by the Turkish Government in order to prove that  religious expression is free and guaranteed in Turkey. The first one was the opening of Panagia Soumela Monastery in Trebizon, a symbol for Pontian Greeks, in 15/9.

For those who try to make connection of the event with the latest referendum we have to point that this decision was made a year before. Let us hope that now that Mr. Erdogan is more powerful than ever, religious freedom will be secured in the country for the minorities. Freedom of religion cannot be secured as a relic with one liturgy per year..Turkey has to deal with every-day problems of the minorities and especially those which are vital for their operation such as the Theological School of Halki.