The priests have tattoos, the sermons are accessible via an app, and believers are more like followers on Twitter. The Hillsong Church has become a global phenomenon thanks to music, and is both popular and controversial at the same time. It is thanks to this new credo that many have reached stardom, not unlike the musician Marco Geraci.

“It’s like going to a concert, only it’s more touching and profound,” Aldo, the 23-year-old follower confirms. The Hillsong Church was created in 1983, its goal being to merge religion and music. Ever since the beginning, when it was lead by founders Brian Houston and his wife Bobbie, known as ‘Senior Pastors’, the church has also been a record company. Nowadays it is considered one of the biggest Pentecostal churches in Europe, and is battling secularisation through rock music. According to the statistics, atheism has been on the rise since 2011, but the Hillsong Church is reversing that tendency. And what’s to be found behind the big events gathering thousands of people? Surprise! It’s young people.

This new religion has even made its way to Italy, where musician Marco Geraci quickly understood its potential. Born in Sicily and raised in London, he’s one of many people to claim that Hillsong changed his life. And his journey was not commonplace: at the age of 25, he jumped from the hardcore underground punk scene to the evangelical community. “I was playing the drums in Palermo, but it wasn’t enough. The Pentecostal church is modern and seduces the youth because it’s dynamic and community-focused. Close to 40 thousand people take part in the European events.” 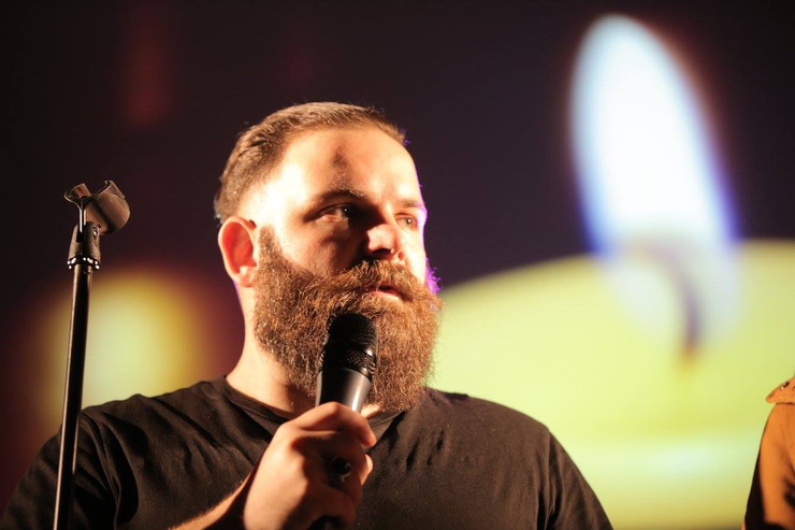 From hardcore to the cross in a heartbeat

“In essence, underground music has a voice that knows how to articulate, that knows how to scream against daily injustices, that whispers in the ears of those who can’t find a reason to keep going and tells them to live another day; it’s one voice that represents many,” Marco Geraci admits, thinking back to his musical roots that enveloped his life in Italy. He gained experience as a drummer and as a screamer with a band that he founded with his brother Giuseppe and other young people. Each of them was searching for a way out of those hot nights in the south of Italy.

They called themselves ‘No Way Out’. Marc took to religion as a way out of his boring provincial life, and what was first a musical conversion soon became a spiritual one. “Regardless of your musical background, you will always be in love with music. Thanks to United and Hillsong Church I discovered Jesus, and transmitted everything that music brought to my life. I know a dozen of young people like me in Europe that did the same thing and who are now part of a big family.”

Marco is now 34 years old, and is one of the leaders of the Hillsong Church headquarters in London. He organises coaching workshops and helps other young European leaders “deliver the message,” but his main activity is setting up concerts in which some parts revolve solely around Jesus.

“It’s thanks to a band called Hillsong United that I got close to this church,” the musician explains, “they delivered a specific message; it wasn’t classical texts talking about God, it was a dialogue between people, it was positive energy and spiritualism that can only be transmitted through music. That’s what convinced me.”

The music is modern Christian rock with hints of hip-hop and gospel, and has already conquered the North America and major European capitals. “We experiment a lot, but evangelisation is our number one priority. But with a guitar and a mic, the message becomes more entertaining, and you leave the concert feeling pensive. Some titles of the most famous Hillsong songs really demonstrate the kind of style we aim for: ‘Am I to believe’, ‘Church on fire’, ‘Father of creation’, and ‘Hope of the world’. It’s a new way of praying, much more in tune with the times.” But it's possible that this message has become muffled, and that Marco has lost a critical view on the religion altogether.

If you’re expecting boring church songs, forget it. The young churchgoers are straying from the smell of incense sticks and the Hillsong Church is fully equipped. Be prepared for an intense experience and long queues outside of theatres, music halls and sport stadiums. Town halls often provide the premises for the Pentecostal church. The design on the posters is captivating and every concert has its own marketing campaign, which often goes viral on social media. People from the world of cinema, fashion or music also promote the concerts. Even Justin Bieber.

When entering a concert venue, it’s clear to see that the atmosphere is 100% hipster. There are light installations, a stage with theatrical effects and projectors that beam key words or trending hash tags. Most of the participants are under the age of 30, and they completely let loose during the concerts. “We go for the energy of the concert, and we stop for the sermon at the end. Hillsong has helped us rediscover faith. We became detached because it didn’t apply to us anymore, but this way it’s really entertaining!” Joe and Laura, two Hillsong Church followers that live in London, admit.

“May God be with you, all of you,” artists often revel. Celebrities are frequently invited to perform on stage, like Justin Bieber, who gave a concert for Hillsong in Australia. Even Carl Lentz, the leader of Hillsong in New York, admits that the church’s success comes from its “being cool, understanding the trends of today and mixing in religion.” The leader has about 150K followers on Twitter and 482K on Instagram. This is the way in which Hillsong attracts disparate social classes, managers, and young freelancers, creating a community with a strong sense of belonging. So it’s no mystery that Warner Bros took interest in the phenomenon a few years back and created a documentary called ‘The Hillsong Movie’.

The numbers speak for themselves: 100 thousand participants each week, 10 million followers on Facebook, 16 million albums sold and songs translated in over 60 languages.

Even though the church sells albums from its record company, it is still a non-profit organisation. The majority of events don’t have ticket sales, but ask for voluntary donations at the end.

Violent and conservative messages behind a hipster veil

The image of a “cool church” that revolves around music has allowed Hillsong to become an international religious corporation that tries to attract the maximum number of people possible. What’s critical is what can be found underneath this veil of rock music. The Hillsong Church is openly opposed to homosexuality and abortion. The last leader of the Pentecostal church who came out of the closet was fired. According to Carl Lentz: “A gay person cannot be a guide for him or herself.”

The very same “cool church” doesn’t believe in women’s equality. Ester Houston, Brazilian model and wife of one of Hillsong’s most influential pastors Joel Houston, publicly declared that: “I am no feminist, I don't believe that men and women should be equal.” It seems that gender equality isn’t high on the hipster church’s agenda.

Not only is this a confusing message, but the church is also hiding some serious allegations. In 2000, for example, the father of Brian Houston [NB. founder of Hillsong Church] Frank Houston admitted to raping minors in the 60s. Justifying the actions of his father, Brian Houston claimed that he was a closet homosexual who suffered a lot.

Even after the allegations came out and the trial took place, Houston remained a pastor due to the code of silence that isn’t unlike the protection pastors received under traditional Catholicism. The same happened during the Boston Globe Spotlight team’s investigations. Even if they try to frame themselves as ‘cool’ and ‘alternative’, some sources claim that the church remains more bigoted and violent than ever.

The European conference that costs more than a festival

Every year, thousands of churchgoers gather for a general conference. On the official website, it says: “To speak of the church of Jesus Christ. Since its creation 30 years ago, this event has always revolved around the growth of the Church, innovation and–above all–God’s influence!” This year, the European conference will take place in London from the 2 to the 4 of August and the believers can meet each other along with the leaders of Hillsong from all over the world. It’s also possible to volunteer at any one event. And, of course, concerts are scheduled every night.

But God’s influence comes at a price: 145 GBP per conference. You have to register and pay online in advance. “But it’s worth it,” says Marco Geraci, “it’s a huge party where we all get to meet face-to-face, and we realise how big the community actually is. There’s something for everyone, even a special session called ‘Kidsong’ for children. It kicks off at 9 o’clock in the morning with two evangelical sessions, then a long lunch break, and a Night Meeting in the evening where music is at the heart of it all.”

Through the conference you can see that Hillsong doesn’t believe in routine; the location changes each time, large events are followed by intimate gatherings focused on dialogue, and these take place in small venues. People that meet during the annual conference sometimes decide to stay in touch and reconvene in small groups, or go out together.

Making a name for yourself with Hillsong Church

“I get the impression that it’s been centuries since I’ve been a part of the underground scene. Now, I’m a member of the Hillsong Church and there’s no way I’m going back, especially given the humanity that I’ve found here.” There is surely a lot of solidarity between the believers and this hipster church. Participation and dialogue are fundamental, as many pastors like to stress during meetings. But Hillsong is also a way of putting yourself out there, of having your CD translated in many languages, and to tour the stages of Europe with a hypnotised audience. “It’s an audience of believers that never disappoint,” Marco insists, “they are ready to listen to God’s message, as well as the musician’s.” This Pentecostal church of masses can also be a trampoline, as Marco mentions: “In Palermo I was nobody, and here I found my identity as well as my faith.” That may be the case for Marco, but it won't be the case for those seeking acceptence in their sexual preferences or seeking equality with regards to gender.