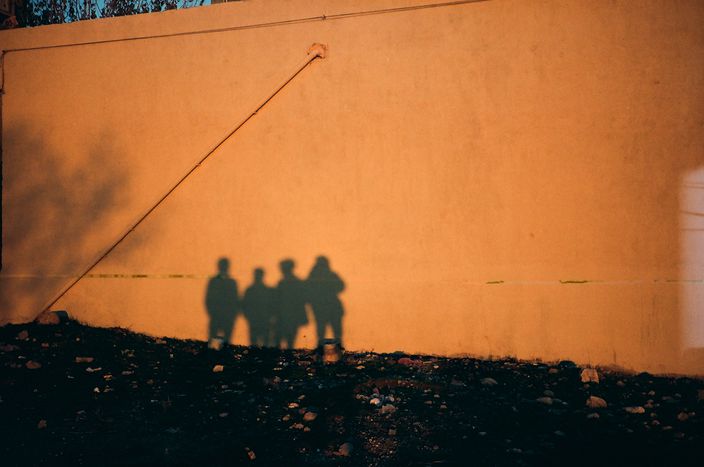 Heading East (2/3): Being young and Kurdish in Eastern Turkey

Faced with daily violence and clinging on to their identity, the young Kurds of Eastern Turkey still hope for prosperity. In the second instalment of our "Heading East" series, we paint a portrait of a hard-to-define youth culture.

In a small town in Eastern Turkey – which has for now been spared the bullets of the army and the militias' counter strikes – six young people share a flat. Some go to university where they study economics, anthropology and art history. Others left the protective cocoon of education a while ago now. Most of them hail from the various small towns and villages in the region, though a few are from the other end of the country.

There's a dreamer, a hypersensitive geek, a gentle giant, the leader of the pack and his loyal acolyte, as well as one who's always smiling. Add to the six of them the friends who spend their days and nights sitting on their kitchen rug, chatting while drinking tea and smoking hookah, further adding to the mosaic of personalities.

All of these people have one thing in common: they all assert their Kurdishness. Even if they are Turkish on paper, they are Kurdish at heart. We'll refer to them here as D, O, C, L and N, as they live in a country which finds itself in the grip of extreme violence between Turkish state forces and the Kurdish population.

"Our brains have been damaged by violence"

For a few months now, the situation in the region has once again become one of horror. D welcomes us with a somewhat tormented look: "My uncle died last week. There was a curfew in his town, but he wanted to go out to get water for his neighbours. They shot him."

Since the fight between the Kurdistan Worker's Party (PKK) and the Turkish military forces started up again, many towns have had to put a stop to their daily lives – people have been confined to their homes and risk their lives if they leave.

Fear and violence have moulded the minds of the Kurdish youth for many years now. More or less everyone knows people close to them who have lost their lives in the conflict, as well as others who have taken up arms, either in the mountains where the PKK are based or in towns where the YDG-H (a militia founded by young PKK sympathisers) is active.

One of our interviewees has a brother who went to fight in the mountains 15 years ago. News from him is rare, they don't talk about his precise location for security reasons. He has never come back to see his family.

Some among them will soon have to do their military service, which is compulsory in Turkey. They may end up shooting at their own brothers. Could they do it? One young man – a great lover of photography, a baseball hat pulled low on his head – will be conscripted in a few weeks. He replies that he "doesn't have a problem dying like a martyr under Kurdish bullets... It's all a question of honour."

Such devotion stems from their heavily asserted Kurdish identity. We are asked several times what we know about Kurdish history, Kurdish music or Abdullah Öcalan (a founding member of the PKK. ed.). We are told to ask whatever questions we want. On the last evening of the four days we spend with them, one enquires: "Do you know about the PKK?" By then we were starting to know a thing or two...

The soundtrack of their lives is partly in French. As we listen to Mireille Matthieu, Zaz, Edith Piaf or Indila, we realise that there may be something political behind this fad. O tells us about a Kurdish institute in Paris, as well as the fact that several political refugees from the region were welcomed into France.

Adhering to a somewhat black-and-white view of the world, they establish who their friends and enemies are. Our French nationality may well have something to do with the warm welcome we were given. S confides in us that he never lets Turks (non-Kurds) he doesn't know into his home.

How can this Kurdish identity be assimilated to the point of becoming the main driving feature in a person's life? It's obviously a reaction to the violence affecting them and their loved ones, perpetrated by an uncompromising, murderous state.

But there may be at least one other determining factor in the construction of this identity: propaganda. Ultra-connected, these young men spend a large part of their spare time on computers and smartphones, reading articles or watching video clips on Facebook and YouTube.

Some seem hypnotised by PKK propaganda: fighters undergoing tough training, burying their comrades, fighting in Syria or shooting at police in Diyarbakır. These videos have a wide audience, reaching tens or even hundreds of thousands of views. The Kurdish anthem constantly plays inside the flat, while C shows off his traditional Kurdish dress and L can't bring himself to take off the PKK flag draped over his shoulders.

As in so many other cases, it's hard to sort through the mass of information, constantly relayed, changed and reused, full of worthless theories and manipulation of the news. N assures us that "the Qur'an says that a third world war will start in Syria!" Nobody bothers to check. People move on to another subject; they praise Putin's politics and condemn the United States and Obama.

Such a strong notion of identity and forceful ideas are not spared the pitfalls of paradox: it's sometimes difficult not to get lost wading through the PKK's political ideals, the students personal aspirations and religion.

Drugs are the most striking example. Even though the YDG-H strongly condemn the use of drugs and have called for the killing of drug dealers (it is difficult to tell whether this is for religious or health reasons), at least half of the young Kurdish men we meet smoke weed from home-made bhangs in our presence – not least two fighters from the very same militia.

"Yes, we believe that drugs are a bad thing, but when we come back from fighting, after our minds have endured very difficult things, it's like a necessity so we don't go crazy," says C, attempting to justify this contradiction. Do they also take drugs whilst fight? Apparently not – they claim their only drug is "honour".

Their views on the role of women are just as ambiguous. Whilst spending four days with the group we only meet one young woman – the future wife of one of their friends. They admire and welcome women joining Kurdish armed groups, whether it be the PKK in Turkey or the Peshmergas in Iraq.  Nevertheless, women continue to have a very limited place in Kurdish society.

On the topic of marriage, O confides: "When I finish my studies, I will ask my mother to find me a woman in the village. I don't want to find a girl at uni, she may end up going out with other guys. [...] Once married, a woman should be able to see other women, but should stay at home and not meet other men outside her family, otherwise she may end up leaving."

To join or to escape

They men are barely 20 years old, thus they are going through a transitory phase and will soon need to decide what to do with their lives. These decisions are informed by the on-going state of conflict and the violence that permeate their daily lives.

There are those who have already joined the fight as C and his cousin did, the latter a full member of the YDG-H. They take up arms in Diyarbakır or the town of Batman and all they think of is defending the Kurdish population against the Turkish state. There is also a young Kurd from Mardin who plans to join his brother in the mountains at the end of his studies; meanwhile, he takes drugs while watching PKK propaganda videos.

This is by no means representative of the majority of Kurdish youth. While many have thought about it, it often seems more reasonable to wait, as O does: "I talked to my mother about going to fight with the PKK. She said I had to continue my studies to serve the future Kurdistan with my art history or IT skills."

Finally, there is a third option – escape. It can already be achieved temporarily thanks to the Erasmus programme, which is set to send O and N to Germany and Poland respectively next term. Assuming this turns out to be possible. Last year, D passed an exam and was supposed to go on an Erasmus placement, but in the end he couldn't because his university failed to allocate funds in time.

Sometimes D feels like he wants to go away for good: "When I read the news about people dying – including children – studying no longer makes sense to me and I feel bad. I want to leave here for a place where there's no violence, where I couldn't be manipulated by the state or the PKK. But it's very hard, my family live here, I can't leave them alone..."

He will take the exam again this year to try to follow in the footsteps of his flatmates, if only to take a temporary break, to maybe "fix" his "brain damaged by violence" and his "memory that has stopped working".

(This article is subjective and does not claim to present any essential nature of Kurdish youth, a demographic as diverse as any other. The intended aim was to paint a portrait – however incomplete – based on conversations held with fifteen or so Kurdish youth, mostly young men.)

The first installment in the series: Mardin, the city of muses

The final installment is coming soon.