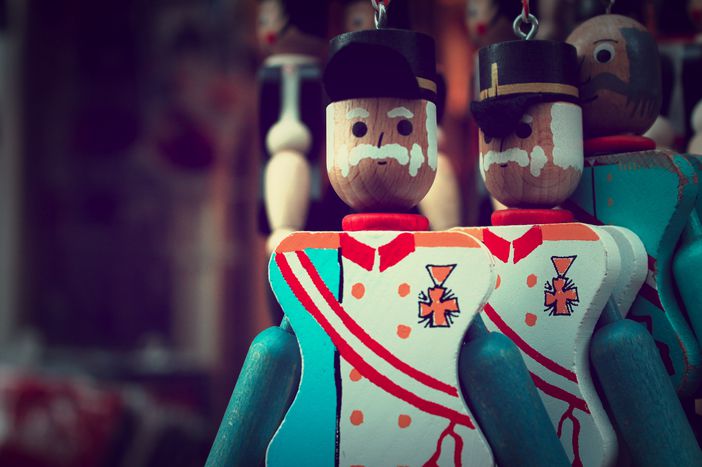 Habsburg Revisited: A Selfie with Sisi

One hundred years ago, World War I marked the beginning of the end of the Austro-Hungarian Empire. Its aftermath can still be felt today. A search for imperial remnants in Vienna.

"Austria without the Habsburgs? Does that even exist?” Getting off the plane in Vienna, I remember my friend, the historian from New Jersey, saying this phrase. In jest, of course; he knows better, and so should I. The end of World War I marked the end of the centuries-long reign of the House of Habsburg and the collapse of the Austro-Hungarian monarchy. Austria is now a republic, more so than Germany, for example, having more thoroughly done away with their aristocracy. Although today every other Lifestyle editor calls Gloria von Thurn und Taxis a princess, all titles of nobility are illegal in Austria. And yet, I am in Vienna, in search of a monarchy that doesn’t actually exist anymore. But I am not the only one. In 2012 alone, more than four million people visited sights such as the Hofburg, the Spanish Riding School and, most importantly, the Schönbrunn Palace, buying whatever royal decorations they could get their hands on in Vienna’s countless souvenir shops.

But is it simply the longing of kitsch-obsessed city travelers like me who keep the memory of the Austro-Hungarian monarchy alive today? As I exit the subway station and find myself being watched by a statue of Empress Maria Theresa, I’m reminded that there are more serious reasons than Sisi fridge magnets and Franz Joseph jumping-jacks that have brought me here. I want to find out if the monarchy still plays a role today in daily life, beyond the intricacies of tourist statistics. I want to get to the heart of it. If there even is such a thing.

My first stop is the Dorotheum auction house. Online I learned that once a year they offer real imperial and royal collectibles. I hope to learn more about the buyers. There might, after all, be monarchists among them. Spokeswoman Doris Krumpl tells me that the annual imperial auction is one of the most visited. She gives me a catalogue. Browsing the pages, I realise quickly that I should probably reconsider my negative attitude towards fridge magnets, merely from the perspective of affordability. The real deal exceeds the capacity of my wallet. One of the most expensive items this year was Sisi’s riding hat, which, at an estimated price of 4000 euros, changed hands for more than 100,000 euros. Other products are cheaper, albeit more bizarre. A recent auction advertised imperial toenails. Authenticity guaranteed. The typical bidder, says Krumpl, is motivated mostly by his or her fascination with the Empire of Austria-Hungary and a longing for the good old days. Whether they are also political supporters of the Empire, she could not say.

Not far from the Dorotheum lies the Imperial Crypt. Since 1633, all Habsburg family members (with a few exceptions) have been buried there, explains the tour guide in an Austrian accent to her English tourist group, while blocking the entry. I do not want to wait, so I enter the church above the tomb. Lo and behold, there is the Emperor, hanging just behind the church door. Charles I, emperor from 1916 to 1918, is serenely looking to the left, his image emblazoned on cards the size of a cigarette box. Pinned to his uniform are small silver medals. “Already consecrated," explains the monk, who empties the offertory box. I learn that Charles I was beatified in 2004. Since then, assistance from the highest authority is readily available for only one euro. The fear of a former Catholic school student kicks in. Reflexively, I drop a coin in the slot and leave the church with my very own little holy image. I expected a lot of things on my way to Vienna. Close encounters of the divine-imperial kind weren’t among them. 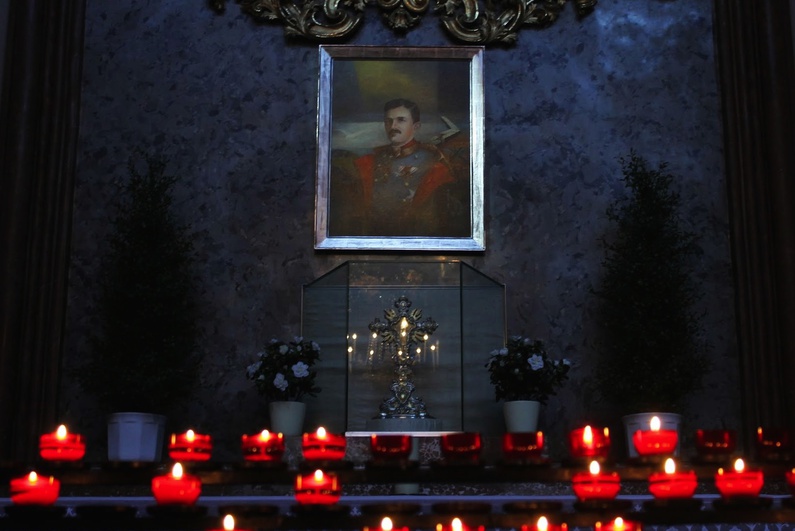 I climb down the stairs to the crypt. A sign at the entrance expressly prohibits 'political declarations.' Was it staunch monarchists or angry Republicans who imposed this rule? I imagine both cases in the most dramatic of ways. The crypt itself makes me understand what Georg Kreisler wanted to say in his song "Der Tod das muss ein Wiener sein" (Death must come from Vienna). The coffins, lined up, are adorned with sceptres, crowns, and bones. With skeletons on the coffins, skulls stare blankly into the dimness. Next to one of the coffins, I find a wreath. "From the monarchists in Moravia," is written on the banner. No trace of the donors. Only a few schoolgirls take selfies in front of the coffin of Sisi, the Empress who’s more like Romy Schneider than herself.

The crypt is more than just a tourist attraction, since the historical royalty aren’t the only ones buried here. In 2011, when Otto Habsburg — son of the last Emperor Karl I — died, he was not buried in Pöcking, his adopted home in Bavaria. The pallbearers in Austro-Hungarian uniforms carried him to the Imperial Crypt of the Capuchin Church in Vienna in a coffin decorated with the Austro-Hungarian coat of arms. During the service in the cathedral, where the President and Chancellor of Austria, among others, were in attendance, the congregation sang the Emperor's Hymn: "God preserve, God protect, our Emperor, our country."

The Double-Eagle Has Landed

The next day I make my way to the 13th district. "Yes, that’s where the Emperor is at home," laughs a Viennese acquaintance when I tell her about it. But at first glance, it doesn't seem that way at all. Gone are the boulevards, triumphal arches, and the ever-present reminders of lofty empire. Instead, there's trendy allotment gardening and the occasional Austrian flag flying in front yards. I turn onto Hermesstraße, which according to my map leads to a hunting lodge built by Franz Joseph to convince his empress to spend more time in Vienna. But that's not why I am here. I am here to visit Nicole Fara. Her mailbox makes things clear; a flashy sticker reads, "Monarchy, the coronation of democracy.” Fara meets me at her door: powder blue blouse, golden double-headed eagle brooch. As vice chairman of The Black-Yellow Alliance Party, she is committed to the re-establishment of a constitutional monarchy.

But not only that. According to Fara, the Danube countries should be governed in a central European block under one emperor. Would that not conflict with the EU? "The EU will fall apart," she explains to me. Ok then. When asked why it has to be a noble ruler of all things, she replies that the Habsburgs had learned over generations to deal with power, while commoners like her and myself easily fall prey to "power frenzy.” I decide not to tell her that I once photoshopped my head onto an Austro-Hungarian imperial uniform. She won’t tell me how many members her party has, but she is sure that political success is only a matter of time. In the last collection of supporters, the Party was missing only 300 required votes to be admitted to the general election. If the people were given a choice in the next general election, the monarchists would surprise everyone, she believes. The “Austrians as such” would enjoy having someone to lean on, a model family leading the way. The most important question I ask her at the end: Does she know whether Karl Habsburg, the grandson of the last emperor and head of the family wants to be emperor at all? She does not know. 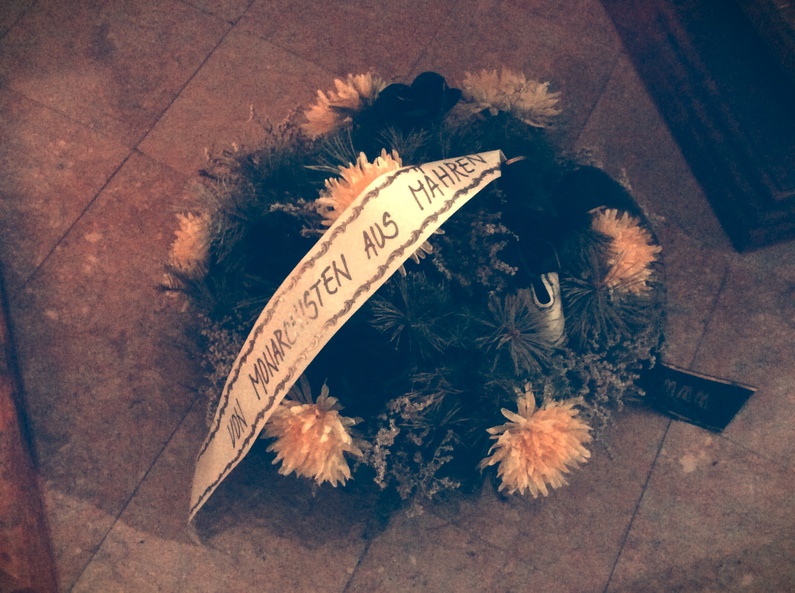 Peter Pritz, who also wears the golden double eagle, knows. As Adjutant General of the Habsburg family, he is one of Karl Habsburg's closest confidants. I meet him in the Army Museum. He is a former soldier and founder of a historic military group that re-enacts a cavalry artillery division. “The boss doesn’t like that at all," he says, ever so slightly pulling up the corners of his mouth when I mention the monarchist party. Karl apparently does not want to succeed his blessed grandfather as Emperor Charles II. I notice that Pritz nevertheless keeps calling Karl Habsburg "Imperial Highness" and I ask him if he's a monarchist. He denies it. He swore his oath of allegiance to the Republic of Austria and is a Republican. He sees the salutation as a sign of deserved respect, which has nothing to do with claims to power. I cannot share this respect, but at the same time, catch myself admiring his dedication.

On the way back, I try to make sense of it all. Did I find what I came to Vienna for? Between imperial jumping-jacks, high-priced devotionals, beatified emperors and genuine affection, I remember the Imperial Crypt and Georg Kreisler and suddenly, the most Viennese of all terms comes to mind: "A Scheene Leich" (A beautiful funeral, a beautiful corpse). Maybe that's all the monarchy in Vienna is today: a beautiful corpse, an ideal image of everything that has long passed. I think of Ms. Fara and am not sure if she would agree. Mr. Pritz, on the other hand, might more readily agree.