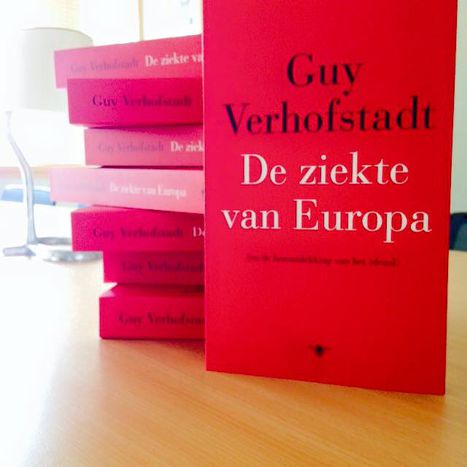 Guy Verhofstadt in search of a cure for Europe's disease

Guy Verhofstadt is a politician who definitely catches the eye and cannot go invisible. His vehement, powerful speeches are turning him into the ‘rock star’ of European politics. Last week his passionate rhetoric invaded the Brussels’ Centre for Fine Arts (Bozar) where he presented, still hot from the publishing house, his latest book ''Europe’s Disease and the Rediscovery of the Ideal''.

In one of his previous books, "The United States of Europe", Guy Verhofstadt discussed the necessity for a stronger political union. Now he is back trying out his pen in this European book.

Verhofstadt, leader of the Liberal Group in the European Parliament presents a volume which aims to transforms his rhetoric in a visionary masterwork dwelling on the problems Europe is facing today and sneaking its way behind the scenes of European power. It is a blend of personal experiences and political anecdotes, a view on the cure for a diseased Europe and its way forward.

Guy Verhofstadt will be remembered for initiating the signing of the Lisbon treaty while he was head of the Belgium government. Currently the polititian is in charge of looking for a new EU institutional future. In ''Europe’s Disease" he calls on the EU to end its chaotic organization and implement what the pioneers of Europe wanted back then at the dawn of the process of European integration. In his vision the solution for Europe is to be more efficient and to react quickly, because now the Union is ‘plumbing’ politics and it has simply arrived too late. Member states are swept by a series of crises and they are incapable to work them out. Verhofstadt finds inspiration in the wise, provident words of the founding fathers. He quotes documents of the 50ies such as the European Political Community, a draft treaty which failed after it was not ratified by the French assembly - they considered it to mean a loss of sovereignty. The builders of the European construction did not expect that in 21st century, Europe would be a loose federation of member states. Back then, in the treaty of 1953, they already had the idea of launching a European political federation that would hold a magic key to the problems we are facing now.

The measures and politics applied in Europe have always been and it has become obvious that the step by step is obsolete and unsound. “Were the founding father extremists?” replied the Euro parliamentarian, when asked whether the federalism is or is not an extreme concept. In Verhofstadt’s words we need a radical change, a deepening of the European integration and long term thinking, because currently there is a lack of efficient political debate and appropriate action. Right now Europe does not work, it is still a la carte, with many ‘opts out’ and ‘opts in’; a variable geometry where each government protects its sovereignty and only strives to cherry pick the best of the integration process.

Verhofstadt wants to spread the message of his book to a larger audience, to involve drastically social media and citizens in the debate on a cure for Europe. He has also announced that he is working on a film based on the book. Currently "Europe's Disease" is in Dutch, French and English editions are expected soon.