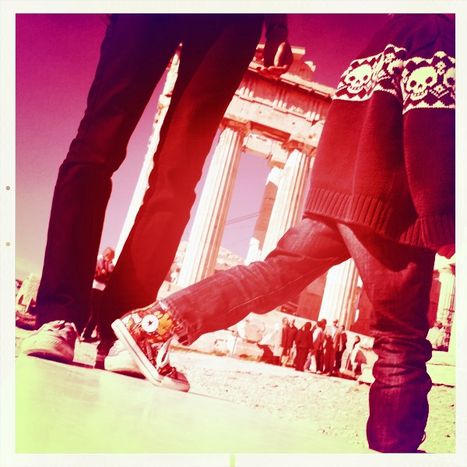 Greece: There were 21 neo-nazis in parliament and the little one said, roll over

The wonderful Greek word 'charmolypi' describes the exact sentiment of the majority after the 6 May elections: joy (hara) and sadness (lypi). There is relief, because the two major parties were punished, but also scepticism about the rise of extreme right and the course of the country

Veni, vidi, vici. The phrase, attributed to Julius Caesar, was the prelude to his nomination as a dictator of Rome in 45 BC. For those addicted to historical coincidences what is extremely important is that Caesar was nominated by the Roman senate itself. Of course, Caesar’s dictatorship cannot be compared to any modern use of the term, let alone his governance. However this event opened the door to what we might call ‘one man's authority’. The same phrase has been used by Nikos Michaloliakos, the leader of the Greek far-right neo-nazi party golden dawn (chrysi avgi) and proves to be correct. For the other parties the corrupted version of the phrase seems more appropriate: ‘I came, I saw and ... I went away’.

Did Nikos Michaloliakos have this in mind whilst he was spouting phrases full of audacity and hate against the ‘traitors’? For those who saw the interview, his tone of voice was clearly fascist, lacking variation and curvature. It was beyond critical scrutiny for the listeners. It was a speech, an articulation without any desire to open a dialogue with the public. People in Greece seem to be shocked by the results. Yet for those looking closely at the political developments in the previous period, everyone knew that golden dawn would enter parliament (with 21 members – ed). Besides, both the political system and the media reinforced the view of the extreme right, hoping that this would alarm voters heading towards the more traditional centres of power, which was until recently the ruling coalition of pasok (socialists) and new democracy (nea dimokratia, conservatives). These parties won 149 of the 300 seats in parliament, and are currently in talks with syriza (the coalition for the radical left), the independent Greeks and the democratic left for a national unity government.

Greek elections 2012: Extreme and moderate party successes included syriza (second with 12.5%), communists (8.2%), golden dawn (far right, 6.7%) and independent Greeks (10.2%), showing society’s rejection of austerity measures. Only 35% voted in 6 May elections to stay in the eurozone, which Greece joined in 2001

The liberals didn't make it. This development is sad because the three small liberal parties raised a total of around 6-7%. Personal disputes and strategies didn't allow them to cooperate, despite the fact that their political differences are tiny. Their absence is a critical loss for democracy, especially when extreme parties are arising. The wonderful Greek word 'charmolypi', which describes a feeling that is both joyful (hara) and sad (lypi), is the exact sentiment of the majority about the elections on 6 May. There is a sense of relief, because the two major parties were punished, thus restoring a sense of justice that was pervasive throughout this period. On the other hand there is scepticism about the rise of extreme right and the course of the country.

Since 6 May there has been no excuse. Everyone - both Greeks and Europeans - is aware of the situation. I do not know whether Germany’s finance minister Wolfgang Schäuble and chancellor Angela Merkel are satisfied with their suggestions before the elections that Greeks should vote for the two major parties. It outraged national voters. Now it’s more difficult for the country to follow its path towards fiscal sustainability and recovery within the eurozone.

This time needs logic, wisdom and cold-blooded maneuvers. Political parties must demonstrate seriousness in order to cooperate and form a government that will be capable of implementing the necessary reforms. Unfortunately, populism is still excessive. It can be found both in the parties and the crowds who are calling for ‘national sovereignty’ and dreaming of a revolution against the lenders - the European commission, European central bank and the international monetary fund (IMF), collectively called the ‘troika’. They are not seeing the real challenge: Greece has to reform. Those who signed the memorandum (which require stringent austerity measures - ed) are accused of being ‘traitors’ and ‘agents of foreign powers’ who naturally hate Greece.

On the other side these are those who are ‘genuine patriots’ are defending ‘national dignity’, both in the left and the right. They don't have a proper position or plan on how to pay pensions and salaries without European aid, but they are full or rhetoric and quotes in order to touch the feelings of those Greeks who are feeling angry with the political system, Germany and the IMF. One group on facebook bears the title of a famous slogan of general Grivas of EOKA during the revolution in Cyprus against the British in the 1950s, when the partisans were asking for a union (Enosis) with Greece: 'We want Greece even if we are forced to eat stones'. Let us hope we will digest this latest turn in politics well.