The unexpectedly reported bankruptcy of MALEV, the 66-year-old Hungarian airline, was a surprise even for its employees. Not only a group of services (eg. direct flights to a number of countries) were lost, but also thousand of jobs. And the not so happy ending of MALEV still does not mean the end of the cut-backs at Budapest Ferenc Liszt International Airport, because the planned closure of Terminal 1 put more jobs at risk. We asked Bálint Bukta, a flight operations officer at the airport, about 3rd February 2012, the day when the bankruptcy was announced, and about the current situation. (The interview was made at the end of March.)

Cafebabel.com: Bálint, was the bankruptcy expected at all?

Bálint Bukta: There are two main reasons that caused the bankruptcy, one is based on the fact that the airline has never been properly capitalized, and the other is that it has become a “political toy”. It had been known for a long time that MALEV was in big trouble. There were some negotiation with the Chinese in autumn about taking over the proprietary rights, but they declined the investment opportunity after estimating the status of the airline. It was only on 3rd February at 6:00am when everyone was informed about the bankruptcy.Then the company received bankruptcy protection from the State and the employees were surprised by the news. Some of them were in the air flying when they heard that the company they work for went bankrupt. Actually, the reaction of other airports and airlines was surprisingly quick.

Cafebabel.com: What exactly happened at the airport? Who were laid off?

Bálint Bukta: Each employee got a call at 6:00 am saying he or she no longer works from that day. They had to pack up their belongings from the lockers until 10:00 am, and their access cards were disabled. The last flight landed was from Helsinki because it took off before the declaration of bankruptcy. Then there was a gathering for all the emlpoyees in the hangar. Approximately 2300 persons were fired the same day, and but some of the pilots deprived of their jobs at this meeting were asked to fly back the planes leased by MALEV to the owner companies. Each “flight” was undertook by a pilot. The last Dash Q-400 (HA-LQC) was returned to Torp-Sandefjord, Norway by captain Attila Leposa and first mate Edina Leposa, the pilot’s daughter on February 23. The first mate sang a line from Hungarian singer Charlie as a farewell song (it was a well-known Hungarian song with the title „Nézz az ég felé” – ‘Look up to the sky’ – the translator). With the bankruptcy of MALEV the airline’s pilots, stewards and stewardesses lost their jobs, but the subsidiaries partly remained in operation. MALEV GH (MALEV Ground Handling, a ground support unit responsible for the technical maintenance - ed.) dismissed 75%, ACE (Aeroplex of Central Europe specialises in repair and maintenance services at Budapest Ferenc Liszt International Airport - ed.) dismissed 50% of their employees. Mournful days were coming after the bankruptcy. 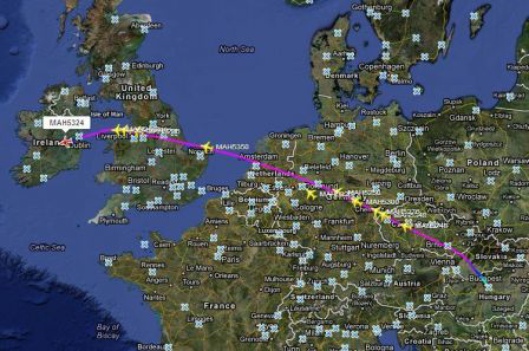 Cafebabel.com: How can the affiliated companies survive?

Bálint Bukta: These subsidiaries have worked not just for MALEV but for more airlines having flights to the airport (LOT, CSA, Air France, KLM). And at the same time there are other ground handling companies (eg. the Turkish Çelebi which employs me) and other with aircraft-maintenance profile besides ACE (eg.Lufthansa Technik).

Cafebabel.com: Where are the planes now?

Bálint Bukta: The ones leased from Shannon, Ireland, took off on February 3, except one that was being repaired, so it rested a few days more. In total, 18 Boeing 737 and 4 Q-400 planes were operated by MALEV. By now each item of the fleet has been taken back to its leasing firm. Some of them fly for other airlines, some has been dismantled. One 767 aircraft (which has not flown since 2009) and one CRJ-200 (which has not flown since 2008) were left, and they are currently owned by Hungarian banks. 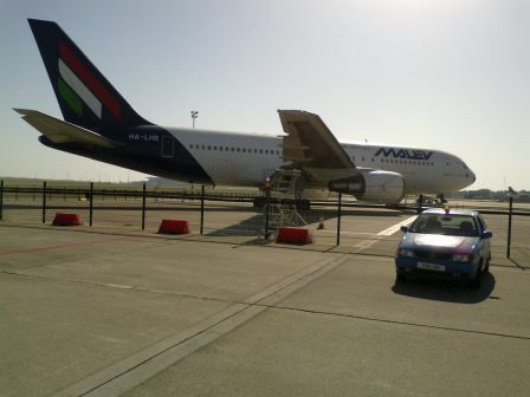 Bálint Bukta: Hungary’s national airline has played a main role in reaching the southern and eastern countries. Now the number of the flights to the Middle East and southern states are much more reduced and the prices are more expensive too. There are cities which are not reachable with direct flights as it have been before, so the passenger traffic dropped too. For example the Chinese Hainan airline terminated a contract because they were not satisfied with just only one Peking-Budapest flight in each or every two days. And also the “code share” flights that provided the opportunity to buy tickets through MALEV to connecting flights have ended.

Cafebabel.com: What other changes can be expected?

Bálint Bukta:Due to changes in MALEV’s passanger traffic, the traffic has reduced at Terminal 2, so it is said that Terminal 1 will be closed from May. That would cause further loss of 350 or more people who run the restaurants or are responsible for the passenger’s safety there. Originally only the cargo and the private aircrafts flew from Terminal 1, this was the “small-aircraft-terminal”. Later the low-cost flights were also added there, but now the plans are about to direct them to Terminal 2. The realization of this change would happen in the summer, which seems bizarre because more airlines operate charter and holiday flights at that time, and according to the previous calculation of the employees there is not enough space for all the aircrafts at the same time. Let’s hope this remains only a rumor.

(Since this conversation, recorded at the end of March, it has turned out to be certain that Terminal 1 is closing down. The latest news marks June or July as a closing date – ed.)