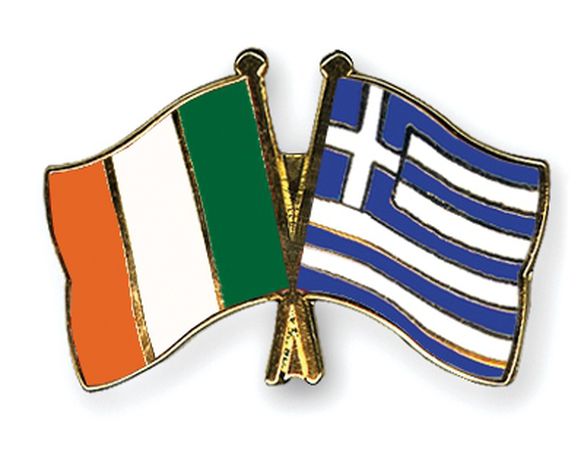 Good morning Dublin..Today we are all Irish

The match is going on..Yesterday the markets scored again against the EU. Now its 2-0. We all thought that the problem was Greeece. It had a big deficit together with an enormous debt.. Measures, memorandum, IMF and today Greece is facing recession. Today Ireland joined the EU-IMF mechanism..

The former ''celtic tiger'', one of the most developping economies of the world some years before, now has to makes more cuts than before to save its banking system.

I read in the New York Times that ''Government officials hope that the large commitment of money will calm investors and keep the crisis from spreading to Portugal and even Spain. It was fear of a market panic and looming contagion that prompted officials to press Ireland to accept aid early before its debt problem got out of control.''

But do you really believe it ends here? Well I think not, there are more to come..

From tommorow the markets will focus against Portugal and Spain..Their problem is the euro not a specific country of the Eurozone..

Serious statistics show that for the first time since WWII, Europeans tend to have a bad opinion about another fellow European country. We have seen stereotypes rising again between the countries..People who are by default ''lazy'' or ''workaholic'', people ''who will pay for other people's deficits'' etc.

Lets face it. The ''European dream'' was built upon economic prosperity. Next to this, political partnership was going step-by-step. Eleven years later, this prosperity, this common route is in danger, and we all know that if Euro fails, Europe fails.

The thing is who is behind the markets? Do they play for their own or for somebody else? And with how many players does the EU team plays? Because I have serious concerns that in this match against the markets some EU-countries are playing against their team...

So, long live Ireland! Today we are all Irish!