Glyphosate is one of the most advanced sales Monsanto has ever made. It's an herbicide that has been declared detrimental for the environment by hundreds of studies, yet one that the EU has avowed harmless. In the midst of the battle between pro-pesticide lobbyists, Member States and NGOs, one group sticks out: individuals dressed up as animals, ready to do whatever it takes to ban the product.

A strange crowd has gathered in front of Brussels’ Palace of Justice. There are fish, jellyfish, foxes, bears, ducks and other animals performing the Haka while hurling bestial screams. In the midst of the brouhaha, clear banners stick out: “Potatoes, no glyphosate”, “We’re hotter than glypho”, “Solidarity with the world’s accused”, “No no no to glyphosate… and the shitty world that goes with it.” Behind this mini zoo is a group of activists who are part of the Zoological Ensemble for Nature’s Liberation (EZLN). Last May, nine of them were charged for damaging the European Crop Protection Association (ECPA) buildings. The ECPA is an interest group that assembles the largest pesticide industries in Brussels. In masses, the closest supporters of the tiger commander and the birdcage commander came proclaiming their outrage. 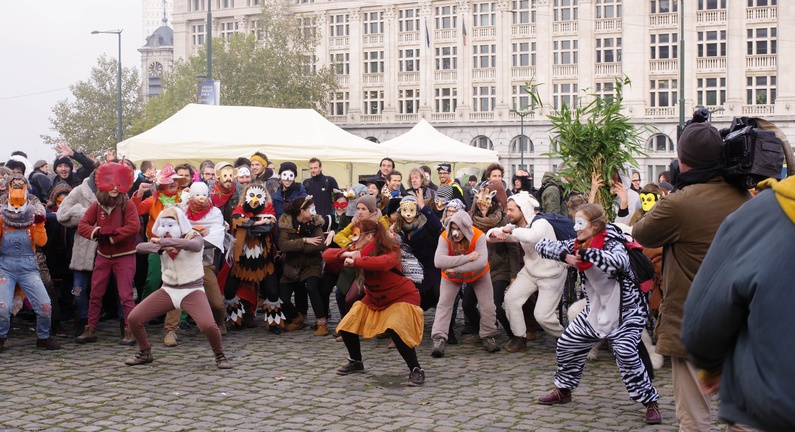 Many supporters are riding alongside the EZLN, such as Greenpeace, Corporate Europe Observatory, the League of Human Rights and Oxfam. There are 50 organisations in total that have signed the call to support the EZLN. They believe that: “actions led by this collective tackle a general topic of interest,” during a turning point for the EU, which “must make the decision of whether or not to extend the authorisation of placing glyphosate, the main ingredient of the herbicide ‘Roundup’, on the market.”

If the EZLN decided to attack the ECPA, it’s not by coincidence. The lobby represents the interests of Monsanto, one of the largest producers of pesticides in the world. The company ‘officially’ devotes 400,000 euros a year to the lobby in Brussels. However, according to the Corporate Europe Observatory, this is below what is really being donated.

In the 1970s, the company seized the invention of a certain Henri Martin whose goal was to unclog pipes using glyphosate. But what made the invention so successful was its use in weeding. The product served to destroy weeds (along with other plants) without affecting the next batch of crops, but only if the rule of waiting one week before re-using glyphosate was respected. What’s more, if the product is coupled with genetically modified seeds from Monsanto, the seeds won’t be affected. They are resistant to glyphosate. Globally today, more than 700,000 tonnes of glyphosate are sold each year. The molecule is inexpensive and very effective. That’s why, since 2000 and since the end of the exclusive patent held by Monsanto, 90 companies use it. We can find it in over 750 products worldwide, making it the most widely used herbicide in the world.

In 2015, a shadow darkens the success story behind glyphosate. The International Agency for Research on Cancer (IARC) based in Lyon concluded that the product was “mutagenic and carcinogenic to animals and potentially carcinogenic to humans.” Researchers made the link between glyphosate and Non-Hodgkin Lymphoma, a rare blood cancer. The research used by the IARC excludes studies carried out by the companies themselves.

From this date onward, public opinion changed from rather indifferent or even in favour of this product (thanks to many ad campaigns by Monsanto) to cautious, as people realised they coming in contact with a dangerous substance. The recent documentary by Marie-Monique Robin called The Roundup Faces its Judges (2017) gives an account of these years in which the product was used uninhibitedly. In the documentary, people like Madame Grataloup from France or Maria from Argentina explain how their children suffered from respiratory malformations after using Roundup, or by simply living next to fields. A German pig breeder also recounts how, after months of being fed GMO seeds containing glyphosate, hundreds of sows gave birth to deformed piglets. There are hundreds of stories like these.

“Under EU regulations, a carcinogenic molecule should no longer be reauthorized,” explains Nadine Lauverjat, a member of the NGO Future Generations. However, even if the IARC recognised the carcinogenic nature of glyphosate in 2015, it is not the official agency for the EU. It’s the EFSA, the European Food Safety Authority, who is in charge.

But in 2015, reports from the EFSA and the European Chemicals Agency (ECHA) concluded that glyphosate is not carcinogenic. This was a huge setback for associations, who denounced the decision as being unregulated and unscientific. The agencies’ research was largely based on studies provided by Monsanto itself, and failed to analyse the existing scientific literature on glyphosates. “This raises questions on the accuracy and independence of European evaluators,” Nadine Lauverjat notes. These doubts were reinforced after the publication of the Monsanto Papers that French newspaper Le Monde revealed. The newspaper revealed, among other things, the use of ghost writing, which meant that Monsanto paid large sums of money to ‘scientists’ who signed off written reports praising their product. In face of these allegations, the Belgian activist group believes that the traditional modes of action are no longer sufficient. In fact, Nadine Lauverjat acknowledges that: “The debate on glyphosates in Europe has reached an unparalleled level of violence.”

When nature reclaims its rights

The collective, created during the COP21 in 2015, is fighting one struggle after another. After the TTIP in 2016, this year’s struggle is that of glyphosates: “In 2017, we understood that the use of glyphosates would be renewed, and we decided that it had to be announced to the media; it needed to be talked about, to show that there are people who don’t agree and that there is a direct and concrete resistance,” recalls commander duck. They don’t fight “for but with nature,” adds the web-footed bird. 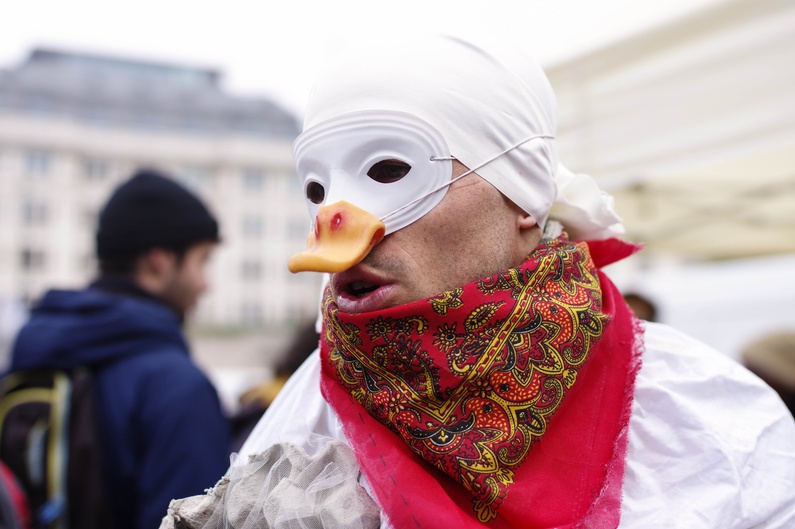 Inspired by the Mexican resistance branch of the EZLN, who they support, the collective consists of about 200 to 300 people between the ages of 18 and 60 who come from all corners of the world, and who are ready to mobilise themselves to defend the environment. About 20 of them are more active, but they try to stay away from hierarchical relationships. Every member has the chance to become an animal commander; it’s a horizontal structure that draws inspiration from anarchists. Before being defenders of nature, butterflies and macaques are – above all – anti-capitalists. “Glyphosate is one of the elements of capitalism, it’s actually a symptom. We’re in an economic model that wants to generate profit above anything else: the environment, workers, male and female. Nature is one of the things that are being destroyed by capitalism. And that’s why, in our reflection on the protection of nature, we are anti-capitalist and everything that comes with [being that],” commander duck explains.

The group conducts non-violent protests that are photogenic enough to make an impact on the public opinion. A mode of action that Nadine Lauverjat comments on: “We should not be deprived of all the legal tools at our disposal: media tools, visuals, that allow us to reach audiences that we would never reach with our scientific studies, for example. Associations are proof of a collective imagination and it’s useful to create a debate. After, it’s of course important to stay within the law. Civil disobedience has a point to it, but it must be carried out very accurately.”

Armed with pots of water paint, snow spray, some soil and greenery, the happy troop headed its commando mission through the ECPA headquarters in Brussels on the 10th of May this year. The action was a success, but ended badly. The police are on the lookout and arrest nine people. Pursued by the Belgian state, they risk having a prison sentence, which is a severe penalty.

So on the 9th of November, the day in which the Member States voted on the renewal of glyphosate, ‘nature’ came together to show solidarity. A potato vendor came in support of the activists. Since the beginning of the rallying, he has sold over 1,000 bags, which amounts to three tonnes. For each bag sold, he donated 3 euros to the association. He says that it’s a way to support them, given the fact that he often doesn’t have enough time to go downtown where the rallying takes place. The bear commander presents the EZLN as a “convergence of animals and vegetables” that he hopes will lead to a creation of an international criminal tribunal against crimes made to the environment. The fox commander himself is regretful of the “climate of repression” and lists all the current trials involving activists. Nina, a member of the Corporate Europe Observatory, explains what happened that same morning, behind the closed doors of the institutions. Member States have still failed to reach an agreement and the decision has been postponed. When France, Belgium and Italy voted against the five-year renewal of glyphosate, Spain, Denmark and the United Kingdom voted in favour.

Encountered on the day of the trial, Christine Revault d’Allones Bonnefoy (S&D Member of Parliament) said that she voted to ban glyphosate and regretfully says: “When you have all the information, it is impossible to ignore [what is happening]. We must stop this scandal.” For the MP, the Member States will become accomplices of Monsanto if they don’t vote for the non-renewal of glyphosate. She also notes the important work of whistle-blowers, like the EZLN. She added that: “This concerns the life of men and women. If we do politics, it’s for them.”

On the 27th of November, Member States voted in favour of renewing glyphosate, with 18 votes for and nine against. But the EZLN won’t stop at any cost: “The trial is a way to shut us up. We’re here to preserve the common good so we won’t be silenced, no way,” asserts commander duck.