Glance at the Sziget beyond the concerts

Similar to last year there were surprisingly lot of people at the Hungarian „Sziget” festival who, beside the concerts, also wanted to take part in cultural programmes - fortunately they could choose among many. We were headed for Hajógyári Island and found the high quality programmes this year again on the Civil Island.

The organizations camping here waited for the people interested with interactive games, quizzes, gifts, and because of these there were a fair number of people. With this place maybe only the Museum Quarter could compete. Here the museums were not only represented by volunteers joining for the Sziget, but also permanent colleagues of the museums, who seemingly were experts in what was shown by them in the Sziget, and their enthusiasm was sticked to us, too.

The Ability Park lost nothing, either, from its popularity last year, here we could again had the experience how the disabled people get along in everyday life. 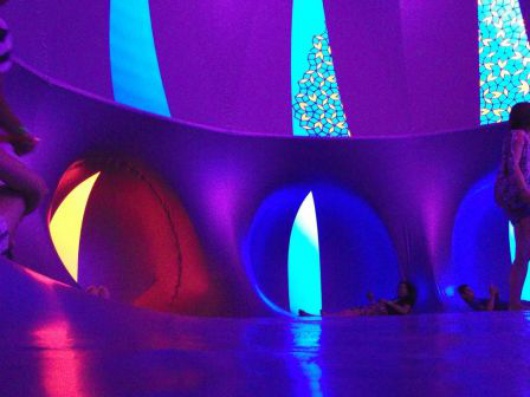 Those who wanted to actively spend their free time until the concerts start could choose among more sporting activities than in the former years, because Sziget organizers fortunately did not forget the Summer Olympic Games happening during the Sziget Festival. In the Olympic Tent we could cheer in front of large screens, we could try different sports live or on Playstation.

Despite the long queue it was worth entering the Luminarium, which promised unforgettable aesthetic experience with its colourful lights free, though inside there was no peace as written in the review. The tent is suitable for relaxing only for a little period of time; you could not spend more than 15 minutes inside due to the heat and the many visitors taking photos – but spending more time is anyhow forbidden.

In the Think yourself out of the box container we had to find the way out by solving exciting logical puzzles – or at least we would have had to find since we did not feel like spending 8000 HUF for the entry. That was the reason why we also skipped the bungee jumping and the Sziget Eye ferris wheel, though they were very popular. 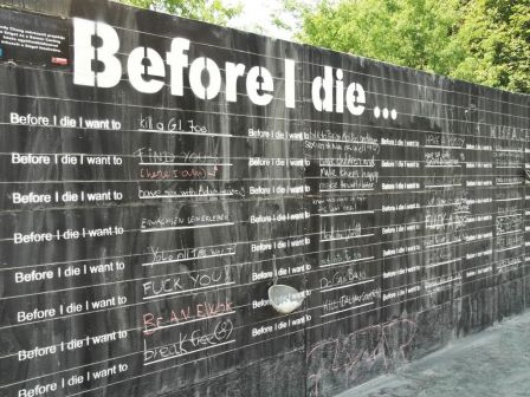 Fans of theatre could be involved in situation games led by actors in the Antiteatrum. Everybody could takepart in making a bucket list on the Before I die wall where the world peace, the world domination, journey around the world, diving with white sharks, changing your gender, self-fulfillment and sex with dogs were also written.

You could not avoid queuing for hours at the Tarot Labyrinth either. With the help of the revived figures of the Tarot cards we could reconsider what role we fill in our lives at present, while we could identify ourselves with the figures of the cards. The labyrinth made up of white tilt walls was a real maze but the hours inside were spent without notice, while we had to solve interesting tasks and we were getting closer to the final judgment, which we had to decide upon ourselves.

Well, this Sziget was good, though we knew almost nobody from the music bands on stage.