Give me a bike so I can see the world

Pablo and Ilze are travelling around the world… on their bikes. Spending less than three euros a day, they have pedalled for more than 25,000 km and crossed 25 countries since they left the UK, three years ago. Pablo tells Cafébabel his story whilst sitting on a  beach in Malaysia.

Pablo wakes up on a beach you might see on a magazine cover, on the East coast of Malaysia. He has no plane tickets in his pocket; to get here all he has needed is his bicycle. Since the moment he left London, three years ago, he has pedalled more than 25,000 kilometres. Together with Ilze, a Latvian girl he met on his first trips through Europe, he has travelled across 25 countries on two wheels, by way of St. James in Spain, the Alps, the Balkans, Greece, Turkey, Iran, Kyrgyzstan, China, Thailand… With no fixed arrival date, they are now going around the world on their bikes.

Pablo’s life changed in 2011, when he left his job as a waiter in Asturias, northern Spain. His plans were to study to become a public servant. “I had some savings but I had never travelled and said: let’s do a couple of trips and profit from the low rates airplanes offered at the time”. It was on these flights, that he met other travellers, who inspired him to continue exploring the world. That two-week trip turned into seven years of nomadic life.

Pablo then started hitchhiking, looking for places to sleep on Couchsurfing -a website that connects people who offer free lodging-, and using other resources for alternative travel which allowed him to wander around the world for extended periods of time without spending a lot of money. 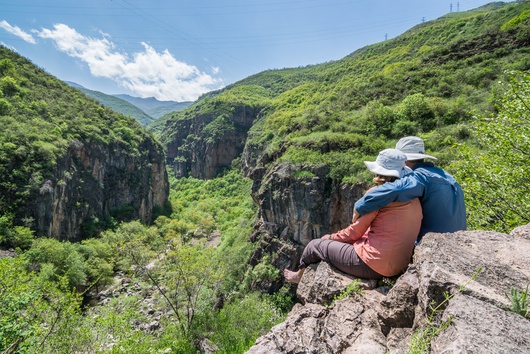 After half a year spent touring around Europe thanks to hitchhiking, he found Ilze, who became his partner on the road. They met in Latvia for the first time and agreed to see each other again in Poland. From here they planned to hitchhike towards Croatia. From car to car, they finished in Budapest, where Ilze planned to take her return flight – but she missed it by  a couple of hours. “I asked her to hitchhike with me back to Riga. The answer was not late in coming: Yes, I do. Once in Riga it didn’t take me more than two weeks to convince her to quit her job and keep on travelling with me around Europe, Morocco, Southern East Asia…”, Pablo explains in his blog.

Three years after, in 2014, they decided to take their bikes, starting with a month-long trip around England and Scotland. “The bicycle gives you a lot of freedom regarding which roads you can take and what you can carry with you, like a tent or kitchen ware”, Pablo explains. You can also bring more and heavier luggage, which is needed for travelling during the winter.”

Two years on their bikes took Pablo and Ilze to China. During that time, they spent less than three euro a day –none of of which went on accommodation. “We only paid for accommodation  once, in Uzbekistan because it was a condition for registering [at the customs office]”, Pablo says.

Every night is spent either in their tent or in the homes of those who invite them in from the road. In the last year, since arriving in South Eastern Asia, they’ve spent a bit more because they are treating themselves to some little luxuries like eating out, milkshakes and sleeping in some paid-for lodgings.

“People are very open and hospitable”, he says. In Iran, for example, “on a day like any other, you would wake up and someone would come towards you with some food. When you’re cycling, every car waves at you and makes a sign to give you food and take a picture with you. To the extent that you have to say, sorry, I want to pedal a bit!”

“Every time you stop, if there’s a house nearby, the people would come over and give you a watermelon or a melon and invite you to come inside their home because they have air conditioning. If you accept their invitation, sometimes they would make you stay for two or three days. More family members would arrive; feed you, and tell you stay! If you don’t avoid this, one out of four people who say hello would offer you to stay overnight at their homes”.

Even so, spending only three euros a day can add up to a significant amount after some time. Pablo says that to earn some extra money he has given photography and Spanish courses, on the way. In China, where he stopped for a year, he even coached a basketball team. 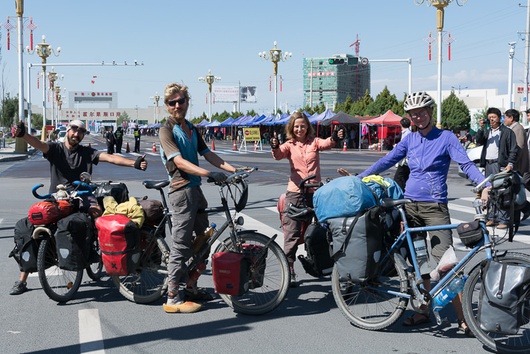 Travelling is very different to going on holiday

“When you depart for Ithaca,

wish for the road to be long,

full of adventure, full of knowledge.”

That’s how the famous poem Ithaca starts, written by Cavafy. That’s also, more or less, how Pablo sees his adventure: “travelling is the experience of going from one place to the next one –and all that happens in the meantime-, and not just what you see when you arrive to your destination”, he explains in his blog. He stayed in China for a year and has been in Thailand for a month so far. He doesn’t have many plans for his future: “Having plans ties you down and prevents you from going to places and discovering them,” he says.

After a little break in Europe to see their families, who they haven’t visited for more than three years now, Pablo and Ilze want to pedal to Singapore and take a ship to Indonesia. Then, “we will look for a little boat to Australia, which will host us in exchange for helping the crew”. Their next step would be to cross to New Zealand. “We will try to find boats again and traverse the whole Pacific Ocean, either in a direct trip or hopping from island to island. We will see. Otherwise, we’ll take a plane to America and we’ll travel the continent from north to south.”

If you feel like doing something similar, Pablo offers loads of tips on his blog The Crazy Travel, like how to choose a good bike or a tent, how to camp everywhere or how to pay the local price when you’re far from home.

Maybe in the future we will also be able to read all of his stories in the book he is writing. He wants to describe the traditions he has seen on his way, interesting conversations he has had and the places he has discovered. “A bit of the nomad’s life”, he says.