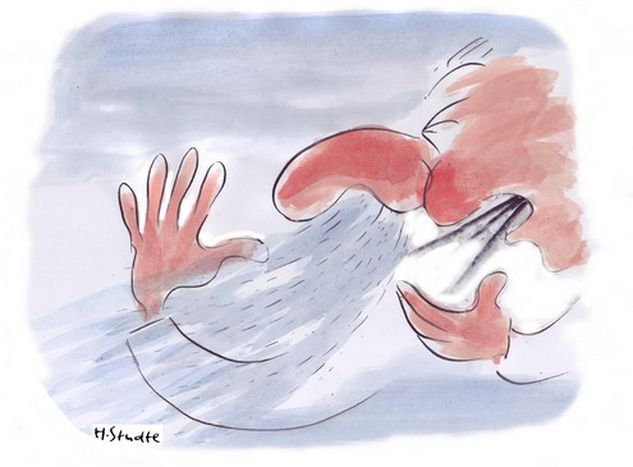 Fits of coughing or sneezing are both annoying symptoms of a cold, but the two are linguistically very different.

The cough is, in fact, an important part of communication. For example, the 1980s British film Gregory’s Girl includes a scene based entirely on different uses of the verb ‘to cough’. Cough up the diamonds! a gangster shouts in English. The waitress clears her throat in disapproval. So the robber, becoming angry, explodes in Swiss German Do gits nüt z hueschte! (‘There’s nothing to cough about’, i.e. no arguments). Suddenly a policeman arrives, ready was zu husten, ‘to cough something’, meaning to tell the baddie a thing or two. The waitress breathes a sigh of relief, saying ‘Luckily this man die Flöhe husten hört’ (‘hears fleas coughing’ – has a bad feeling about things.)

Sneezing is a completely different matter. A sneeze is not a method of communication, but it does provoke various expressions of good wishes. The explosion of a sneeze also has a liberating quality.

In ancient times a sneeze was considered a sign of good wishes from the gods, and in the middle ages it was something to be feared, as it was believed that the soul could be catapulted out of the body, leaving it vulnerable to possession by demons and diseases. The belief gave birth to traditions all over Europe.

In Poland, when someone sneezes you say Na zdrowie! (your health!), wishing the person Sto lat! – one hundred years of healthy life and Na zdrowie ('bless you'). The same thing is said in Italy (Salute!), Germany (Gesundheit!) and Spain (¡Salud!). There is another Spanish phrase, no longer used, which wards off the loss of the soul: ¡Jesús y un credo! (a profession of faith from the Catholic catechism). Bless you! is what everyone says in England after someone sneezes, even committed atheists, just as people will say oh my God, dio mio or mon dieu, when surprised, whether they are believers or not. In France those suffering from a cold are supported with a tes souhaits! (‘to your wishes!’ – may your wishes come true).

But times are changing, and the modern guide to good manners may in fact recommend not saying anything, as such matters as sneezing should be private and therefore (politely) ignored.

English : Cough up the diamonds!

Translated from Ich huste Dir was