They were born and/or grew up in Germany after the fall of the Berlin wall. They all work in politics. They come from different political backgrounds. They are involved in politics in their own way, each with their own vision of Germany and of their generation. Cafébabel spoke with them about today's youth and the Germany of tomorrow.

Overqualified or poor, cosmopolitan or patriotic, pro-European or Euro-sceptic; are young Germans really so different from their European neighbours? What future do they see for their country? What role can they play?

As a young person, it's not easy to find one's place in a country where the population is ageing. The 18- to 30-year-olds represent an electoral minority (15%) whereas the oldest population bracket (70+) represent over 20% of voters. Still, political decisions that are voted for today will form the basis of tomorrow's future.

On the 15th of September last year, a citizen's initiative organised a pre-election for people under the age of 18. Germany's children and teenagers were given the chance to express their political opinions through a symbolic vote. The most popular vote was for the CDU (Angela Merkel's party), followed by the socialists and the greens. The initiative was devised to spark an interest in politics among the future generations, who are often accused for their lack of interest in political life. Why? Because of the high percentage of abstention by young voters.

"I don't believe that young people aren't interested in politics. On the contrary, when we manage to talk with them, we realise that they have opinions about a lot of things," says Paulina Fröhlich. This 26-year-old from Cologne is involved in a cause called "Will you come and vote with me?", which fights against the refusal to vote. "Young people are very connected and in touch. On YouTube for example. They have opinions on everything that concerns them, like graffiti or the right to have a mobile phone at school. It's political, it creates debates. When we're young (and we have all been there) all we want is for people to take us seriously," she adds. 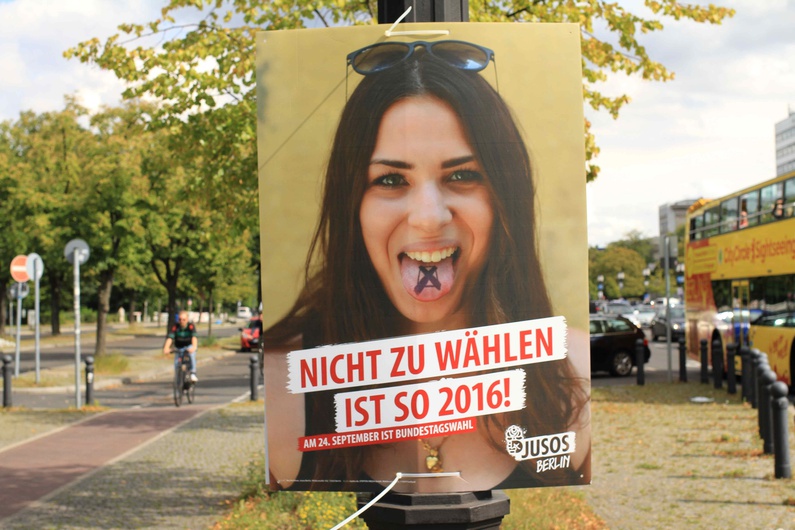 Students or young employees want to get politically involved more than once every 18 months. This is the case for Diana Kinnert who, at 26 years old and still wearing a cap, wrote a book about the glory of conservative values. Since the book's publication, she has become the young supporter of the Christian Democratic Union (CDU). Victoria Meneses, on the other hand, started campaigning in Berlin at only 30 years old to get a seat as representative for a universal basic income in Parliament. And then there's Dennis Hohloch, a 28-year-old who is quite familiar with political life. He has been part of the town council for Alternative for Germany (AfD) in Potsdam since 2014, and is also at the head of a movement for young AfD-ers in Brandeburg.

They haven't lived through the difficult years of the German reunification, and have basically only known Angela Merkel as Chancellor of Germany throughout their adult lives. These four youngsters are all optimistic about their generation, but don't necessarily see the same problems and challenges for the future. While they are concerned about politics, under 30s in Germany are much more pragmatic than revolutionary.

As shown by the latest Shell study on young people in 2015, they consider family values, friendship, respecting the law and the environment extremely important. "We are living in turbulent times and young people are looking for a sense of stability," says Diana Kinnert who works for Angela Merkel and who is considered the new face of "coolservatism" by FOCUS magazine.

Dennis Hohloch, on the other hand, is more severe with people his age. He considers his generation to be a "soft generation". Having signed up to the SPD when he was in high school and later signing up to the AfD just after it was created in 2014, he entered the Potsdam town council at 25 years old. "We are a generation that is not able to make decisions, who study without finishing, who travel the world and who remain distanced from the heart of the country."

In the face of critics, Paulina Fröhlich, who works on digital campaigns as well as "Kleiner Fünf", thinks that times have changed. "My parents say that they find our generation not as engaged as theirs, who went to the streets to demonstrate. We do it online, which is perhaps not so visible, but doesn't mean that we are doing nothing."

Commitment is an everyday attitude for Victoria Meneses, who was interested in development and cooperation while she was studying. "I make an effort with regards to my consumer attitude. I buy ethical clothing and produce that is both vegetarian and organic." This is an attitude that is more and more common amongst young Germans, who are increasingly interested in sustainability and environmental protection, according to research.

For over ten years, Klaus Hurrelmann has been working on the Shell studies about young Germans. He explains that: "Young people see that Germany's role has changed, and both realise and appreciate it. A new self-confidence, very sober, is appearing, one that is associated with real open-mindedness and tolerance."

"What I like about my country is the possibility to do something like Kleiner Fünf," says Paulina. The young lady, who has travelled the world and spent time in Egypt, adds: "I know that in other countries it would not be possible. We are lucky to be part of a democratic country, where we are encouraged to follow our ideals."

Dennis, professor of history and geography, says: "What I find positive in my country is that we all have the same chance to succeed, irrespective of where we are from. The state pays for our education. Nonetheless, I don't like that many exploit this and study until they are over 30, and don't work or appreciate the privilege that they have."

Victoria Meneses, on the other hand, thinks that the current system excludes too many people: "Those not able to keep up with the continuous acceleration of this modernisation find themselves on the side lines. And what's more, they are made to feel guilty." She thinks that the state could go even further and introduce a basic income. If we relieve people from the fear of 'just getting by', "we will have more time to think about ourselves and our world. I hope that we come to realise that we are not isolated from one another or from nature." 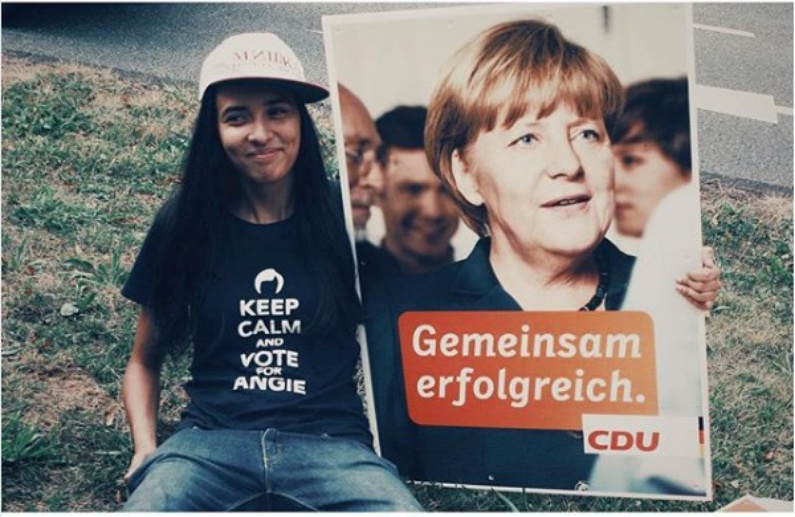 Not very patriotic, but not yet open enough

Klaus Hurrelman has noticed that: "Most of the young people in this country are well aware of Germany's difficult history, but claim to be proud to be German." Another study on young people, from the Sinus Institute in 2016, also underlines that they are not overly attached to patriotic symbols, like the German flag or the national anthem.

Dennis, who is heavily engaged in his work with the youth organisation of the AfD, is quite critical: "Our generation isn't patriotic enough. I find it shameful that people don't want to go and do military service. I'm not saying that we should all go into combat and shoot at people, but it's normal in other countries," the young man explains, who is also in favour of closed borders and border control within Europe.

For Diana and Paulina, the problems found in Germany are due to a lack of openness. "There's too much xenophobia for me," Paulina admits, who says that she has a number of Syrian and Turkish friends who are well-integrated but also victims of racism.

Diana also thinks that more diversity is needed in politics. She alludes to the fact that she is an exceptional case by being lesbian and an immigrant. "A more even democratic representation in Parliament would be the best way of having political actions that are for the common good," says the militant, who works for the commission to reform the CDU party.

The journalist Maximilian Probst made a point in his article in Zeit Campus about the extent to which young people were absent: "Politically, gerontocracy prevails. It is the older ones who have kicked the UK out of Europe, put Trump in his position of power and who work to make Merkel immortal!" he argues.

"I would like us, the young people of this country, to be more committed, but also to express ourselves more," Victoria adds. "We also need to defend our interests, because we will live for a long time with the consequences of social choices that are made today."

This article was written with the support of the Franco-German Youth Office (OFAJ).