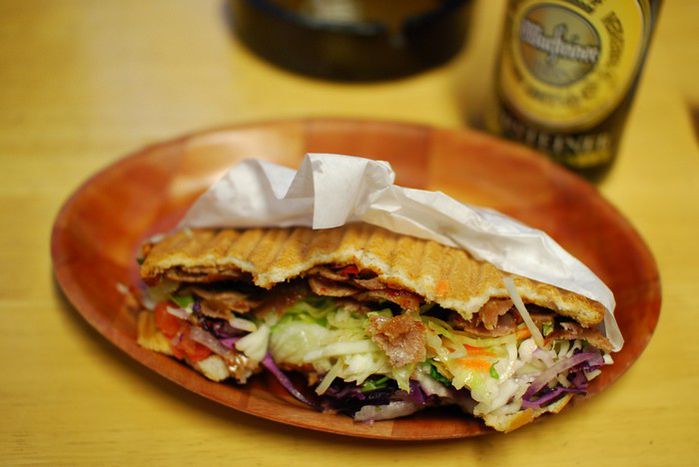 At the end of January 2009, the Turkish daily newspaper Hürriyet reported that the German town of Viersen had ruled that its retailers must replace the Turkish word 'döner' (which means “rotisserie”) with its German equivalent 'Drehspieß'. In Italy, the city council of Lucca banned 'ethnic fastfood' in the city centre. Is the döner kebab the target of an anti-Turkish conspiracy?

Mahmut Aygün must be turning in his grave. He died in January 2009, aged 87, in a Berlin retirement home called Türk Bakim Evi. Except to the regulars at his excellent, local restaurant in Kreutzberg, Hasir, his name means nothing. And yet, Mahmut Aygün, a Turkish immigrant worker who arrived in Germany at the age of sixteen, had an idea which was to transform the European 'fastfood' landscape. In 1971, he was working in a little restaurant at the Zoologischer Garten ('Zoological garden') train station in Berlin. One day he decided to put the thin slices of meat which he usually served on a plate with rice and salad, into some round bread. The die was cast and the first Turko-German speciality, the little döner kebab sandwich, was born!

In Berlin and its surrounds alone, there are no less than 1600 'dönerci' (döner shops) today. Around 720 million sandwiches are sold each year in Germany and the profits of the döner business are three times higher than those of McDonalds in Germany. The vegetarian version uses cheese instead of meat and has Belgian fries inside, the Mac Kebab …. There’s something for almost everyone! 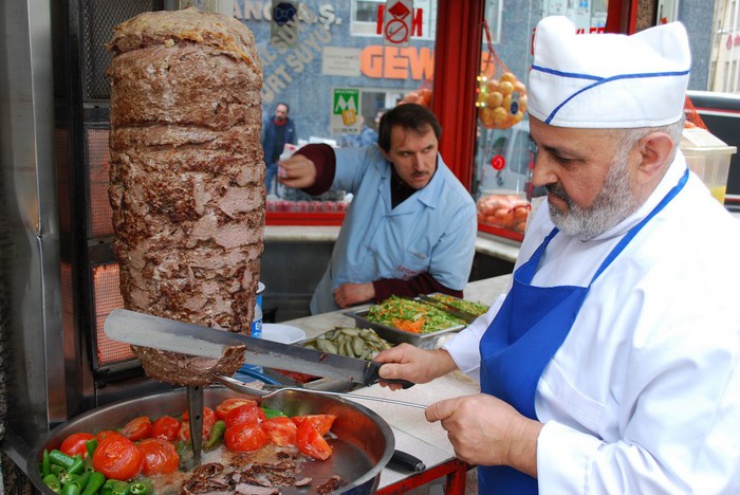 However, the döner kebab almost disappeared. In the ‘90s, Kreutzfeldt-Jacob disease, döner kebabs, which are usually made with beef, went through hard times. The döner kebab makers turned to chicken and turkey instead. Some years later, at the end of 2006, the reputation of the döner kebab was seriously damaged in Germany following a wave of rotten meat scandals. A truck carrying several tonnes of meat in a state of semi-decomposition was intercepted on its way to deliver to a Bavarian döner kebab business.

Some restaurants have been the target of extreme right-wing aggression, even attacks, especially in former east German areas

The Turkish media cried conspiracy. The centre-right daily newspaper Milliyet cited a Turkish vendor, Arif Arslan, as saying: 'Each year, they try to defame us with new accusations.' Another paper, Sabah, wrote about a 'filthy campaign' of slander. While certain politicians have seized upon the news of rotten meat scandals as a chance to bring together the Turkish community, others, by contrast, have decided to highlight their support for immigrant populations. Claudia Roth, leader of the German green party, was snapped midway through slicing off a piece of meat, a smile on her lips. Some kebab restaurants have been the target of extreme right-wing aggression, even attacks, especially in former east German areas. For example, just last April, a Turkish restaurant in Cossebaude, near Dresden, was partially destroyed by a Molotov cocktail.

A glass and a half of cooking oil 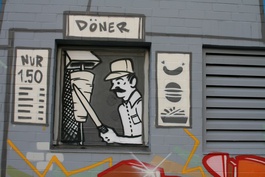 A victim of its own success and of the terrible fastfood price war, the kebab is also suffering, like all types of fast food, from a growing interest in eating healthy, balanced food. According to a recent study published in Britain, eating a kebab is equivalent to drinking a glass and a half of cooking oil.

Interviewed shortly after the first discovery of kilos of rotten meat, the German kebab expert, Eberhard Seidel-Pielen, has written a book on the subject, called Skewered. He writes about how the döner kebab arrived in Germany and gives advice on how to avoid indigestion. He also advises against chicken kebabs, because of the risk of salmonella, and kebabs that cost less than 2.5 euros (£2.15), his threshold for meat quality. Finally, he encourages readers to choose a restaurant where Turks eat.

Today, we are suffering from the effects of the credit crunch and purse strings are tighter. Sandwiches in Berlin cost between one and three euros (86p to £2.68): it’s difficult to find one for any less and restaurants are always full. 'Thanks, Mahmut!' said the headline in a German newspaper when Mahmut Aygün passed away. He now rests in peace. His döner will no doubt survive him for many years to come.