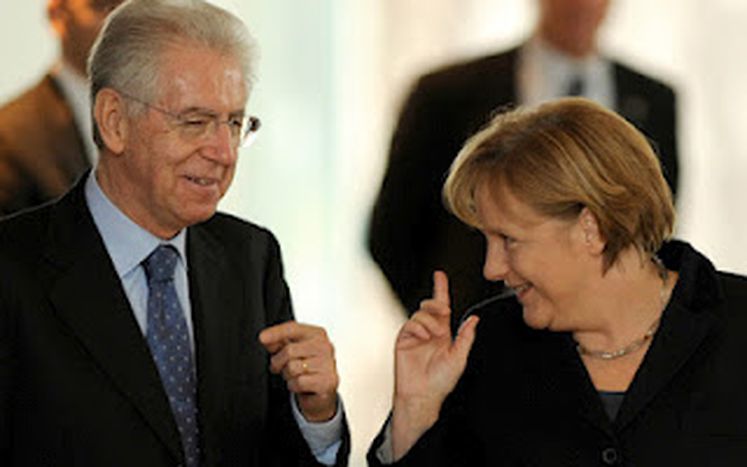 They want all solutions to be given equal consideration, including measures being taken about ‘credit spread’, ‘Golden Rule’ – the possibility of not acknowledging investments as sovereign debt but as current assets instead – and eurobonds.

Italy knows that it could be the next country confronted with financial chaos and believes that if it goes into bankruptcy, then the euro (as we presently know it) will no longer exist. When the question, therefore, of which party will be more difficult to convince - Ms. Merkel or the stock market - the Italian Prime Minister Mario Monti simply answered that he “likes challenges”. At the same time, he asked his ministers to be available for a government meeting on Sunday, in the eventuality that nothing is agreed at this summit.

Italy, while seeking solutions, finds it really difficult to understand why Merkel does not want eurobonds as much as they do, or why she remains so stubborn about austerity. They fear the possibility of Italy becoming the new Greece and they earnestly have difficulty understanding how it is that Italy will emerge from the current crisis. Italians, in turn, perceive this German behaviour to be a consequence of national interests (theirs over ours), a lack of elasticity.

On the other hand Italy have been lambasted for being too “elastic” where their debt control is concerned over the past ten years, enhancing its debt so much that it is second only to Greece in relation to its GDP to debt ratio. It is for this reason that what German Financial Minister, Wolfgang Schaeuble, said to the Wall Street Journal today came as a big surprise to the Italian media. He mentioned that the use of the EFSF and ESM funds is one possible short term measure that could be taken, and proceeded to affirm that Germany can engage in a dialogue over eurobonds- provided that there is a European authority which has oversight into states’ accounts. This is very important news indeed! So, even though eurobonds are not a topic of discussion on the European Council’s agenda this time, this statement enhances Italian’s expectations for the period immediately following the summit.

As Italian economist, Andrea Garnero wrote in an article entitled: “I 10 giorni decisivi per l’Europa” (10 decisive days for Europe”) Europe has to remember John Maynard Keynes’s lesson, not the one from “General Theories”, but rather the one from “The Economic Consequences of the Peace”. He admitted the faults that Germany had at the time of WWI, but he was against tough sanctions, the kind brought about as a consequence of Nazism in the aftermath of WWII. He simply supported solidarity and fair treatment, which is the centre piece of what came after in the Marshal Plan and which led to the rebirth of Germany and Italy.

Today we face the exact same concern. Italians know their faults, but they also need the solidarity of Germany, because it is the only way to save Europe, and in turn, to serve Germany. The flag of Europe has 12 stars for this exact reason, they stand for solidarity. Every European citizen (and their elected officials) should remind themselves of this small, but nevertheless important, detail.