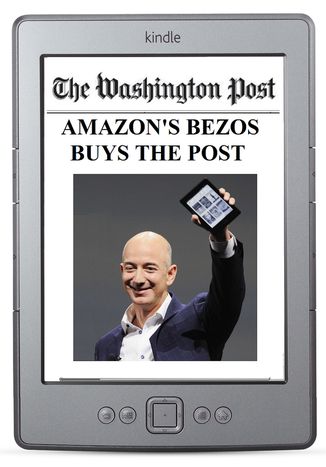 Jeff Bezos will buy the renowned US newspaper, which has been making losses for years, for 250 million dollars, as the newspaper's publishers revealed in a surprise announcement on 5 August. Some commentators believe the online trader will be able to breathe new life into the newspaper using a digital strategy. Others fear journalism is being reduced to the status of a junk product

The sale of the Washington Post to amazon boss Jeff Bezos brings just as radical a shift to the media landscape as the Springer deal in Germany did, the conservative Frankfurter Allgemeine Zeitung comments: ‘The Springer group sold newspapers and magazines to the Funke group for 920 million euros. It wasn't that the publications had dwindled into insignificance. They just didn't make enough of a profit any more. So journalism becomes a junk product and a publisher turns into a digital casino. The Springer sale was a turning point for the German newspaper landscape, just as the sale of the 'Post' to Bezos is for the US. But in view of the global moves towards concentration which online companies are now making with newspapers, we must ask whether Lenin wasn't perhaps right with his theory of state monopoly capitalism: the world is ruled by a financial data online oligarchy with top connections to the secret services. We'll soon see how Jeff Bezos treats the Washington Post's 'values' when his newspaper covers amazon’ (Michael Hanfeld)

‘Bezos combines trumps of past with those of future’ - De Morgen, Belgium

Investigative journalist Bob Woodward of the Washington Post has taken a positive view of the takeover of the venerable newspaper by amazon boss Jeff Bezos. The purchase could indeed prove to be a successful model, the left-liberal daily De Morgen writes: 'Many believe Bezos has the potential to save serious journalism in the US: he has plenty of money to pay expensive editing teams and it looks like he plans to deploy his powerful Amazon machine to give the (digital) Washington Post a boost. Another factor not to be overlooked is that he knows how important the newspaper is for ensuring the 'survival of a free society'. The fact that Bob Woodward and Carl Bernstein - the two Washington Post investigative journalists who brought about Nixon's downfall - are optimistic speaks volumes. According to Bernstein the new boss combines the trumps of the past with those of the future. The code for successful quality journalism for the future hasn't been deciphered yet, but it's clear that it can only be achieved with a combination of new technology and best journalistic tradition’ (Koen Vidal)

The sale of the Washington Post to amazon boss Jeff Bezos highlights the opportunities for established publishing houses, the conservative daily El Mundo believes: 'The fact that a successful internet entrepreneur like Jeff Bezos has bought the legendary Washington Post for 190 million euros shows that journalism is not dead, as many have claimed. Behind this last decision by Bezos, who since amazon's founding has accumulated a fortune of 18.9 billion euros, there are two interesting phenomena indicating that the future of text media may not be so grim after all. Firstly it counts on a new digital business model that uses the experience of online sales to compete successfully on the crisis-stricken press market. Secondly it reaffirms the enormous value of a media brand that is known for its independence, high principles and solid research’

‘Bond of trust between brand and audience can ensure survival of newspapers’ - Le Télégramme, France

Quality newspapers remain indispensable for democracy even in the era of the internet and online media, the regional paper Le Télégramme argues: 'The sale of the Washington Post to Jeff Bezos is symbolic. The crisis has destroyed the business model of the US press, which was largely dependent on advertisement (unlike that in France). Now the giants of the digital world are taking control. Whether it be on paper, on the internet, on tablets or on TV, the news - of course with different formats in different media - must remain sufficiently gripping to prompt people to spend money for it. Since the illusion of a free culture has survived, only a persistent bond of trust between the brand and its audience can ensure the survival of newspapers. They remain essential for democracy, and all the more so in the multimedia age when everyone writes anything and everything they want’ (Hubert Coudurier)

*More from the official website of the photographer Mike Licht