The satirical weekly Charlie Hebdo republished the images on 18 September. In France and the US, there are fears that this could further stoke anti-western sentiment in predominantly muslim countries. While some commentators accuse the magazine of acting irresponsibly and being driven by greed, others warn that the west should not exercise self-censorship out of fear of religious fundamentalism

'How to appeal to reason?' - Le Soir, Belgium

With its appeals to the freedom of opinion the French satirical weeklyCharlie Hebdo is fanning the embers of conflict, the Belgian left-liberal daily writes: 'Not publishing the cartoons would in no way have called into question our principles of freedom. Charlie Hebdo is only decorating itself with supposed virtues. However with its decision the satirical weekly is not advancing the freedom of opinion, but only using it to pour oil on the fire. The damage has been done. How to appeal to reason? How can further fatalities be avoided? How to explain to muslims that true democrats have as little interest in offending them with insulting cartoons or a stupid film as the large majority of Muslims has in denying us the right to express our opinions or publish caricatures? No more than the large majority of muslims seeks to deny us the right to freely express our opinions or to publish caricatures. All efforts are in vain. There are firebrands on both sides who turn a deaf ear to any words of reconciliation' (Didier Hamann)

'Vicious circle to be stopped at all costs' - Le Nouvel Observateur, France 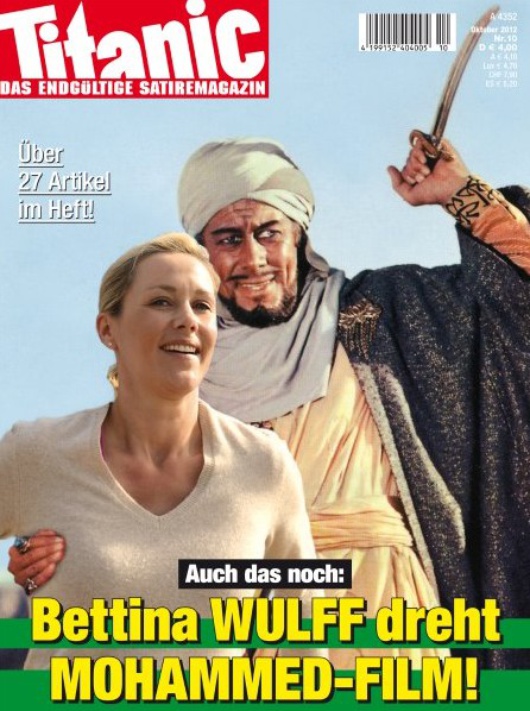 Charlie Hebdo is abusing the freedom of opinion to boost its sales figures, the French left-liberal weekly magazine criticises: 'As far as attacking muslims goes, Charlie Hebdo is a repeat offender. If the publication now becomes the target of another attack, it can boast: 'We told you they're a bunch of crazies.' The whole thing is a vicious circle, and it must stopped at all costs. The worst disservice that one could do for to this paper is to attack it violently. The right approach is to subject it to political criticism. Charlie Hebdo must be unmasked and shown to be no longer a medium for free thinkers but a populist rag. Bad-mouthing muslims in today's France is not a sign of courage. The editorial board says it's acting in the name of the freedom of opinion. But in fact its goal is to up its lagging sales figures with regular jabs at muslims' (Pascal Boniface)

The west should not exercise self-censorship out of fear of islamic fundamentalism, the Italian liberal-conservative daily warns: 'The reaction of the fundamentalists, with their anger and murderous intentions, is not directed against caricatures or videos of questionable quality, but against the democracies that allow these things to be disseminated and fail to exercise systematic state censorship. For the fundamentalists, freedom of opinion in itself is a crime, and any society that is not tyrannised by religious police is an impure world that must be eliminated. In the west there is a great temptation to use censorship because the consequences of irresponsible abuse of the principles of freedom are feared. But if we tried to justify this censorship syndrome with an erudite but incomplete interpretation of Voltaire's treatise on toleration this would be pure hypocrisy, because the only reason for the censorship would be fear. The fear of an abominable and violent reaction from islam' (Pierluigi Battista)

Satire must test society's limits, and for that reason it must also address the fears of religious fundamentalism, the liberal German paper argues: 'It's all the better that this time the initiative comes from the left-wing liberal camp and not the right-wing populist corner. Since islam has become strongly politicised the west's fears of religious fundamentalists have been growing. It's the fanatics that are behind the violence; not caricatures. The consequence is that the west is afraid of saying, drawing or - as in the case of the controversial Mohammed film - giving access to something wrong. So far hardly anyone has seen the film anyway: it's just the trailer that's making the rounds. And some muslim countries have long since blocked access to that on the internet. Nonetheless the fanatics who are fighting for power and supporters in their countries or trying to divert attention from their misdeeds took to the streets. And if it hadn't been some obscure film or the caricatures that provoked them, they would have found something else. These things are just the triggers for the violence, not the cause'