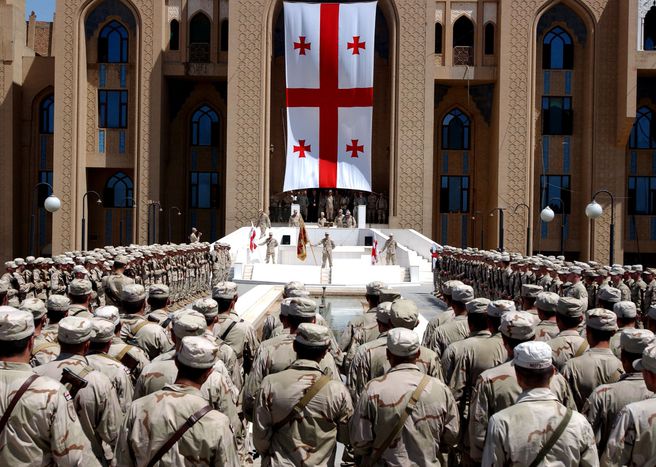 On Sunday October 27 2013, Georgian citizens will head to the polls to replace President Mikheil Saakashvili and elect a new President who will be nothing more than a figurehead.

On Sunday October 27 2013, Georgian citizens will head to the polls to replace President Mikheil Saakashvili (United National Movement) and elect a new President who will be nothing more than a figurehead. Both the international community and the Georgian population appear decidedly less excited about the country’s Presidential elections than they were about last year’s parliamentary elections, sharing the opinion that the outcome is comparatively unimportant. However, the fact that the elections are taking place in an atmosphere that international observers qualified as calm and relatively unproblematic, is a feat in itself. Observers have noted that there were far fewer cases of administrative resources being misused for electoral purposes, and that the media landscape is less polarized than it was during previous years. Moreover, the elections will mark the first time a Georgian President is replaced through elections after the previous President served two terms in office, and thus represent an unprecedented level of normalcy in Georgia’s heretofore-erratic transition to democracy.

New Politics for Movers and Dreamers

Meanwhile, the new President will retain competencies in very few matters, among which the most important are foreign relations and an important role in case of a vote of non-confidence. The new head of state will be permitted to sign international treaties or carry out negotiations with foreign governments only with the permission of the government. He or she will also need the permission of the government to appoint or dismiss the chief of staff of the armed forces and ambassadors, and will be unable to initiate draft laws.

Despite the new President’s lack of influence, many people appear interested in the position. Twenty-three individuals are currently running for President, the largest number since Georgia held its first Presidential elections in 1991.  Only three, however, stand a chance of winning a significant number of votes. The Georgian Dream’s candidate Giorgi Margvelashvili, a professor of philosophy and former Minister of Education who was largely unknown until recently, is leading the polls.  His main contenders are the United National Movement’s candidate Davit Bakradze and a former speaker of the Parliament, Nino Burjanadze. Prime Minister Ivanishvili and his party members are so confident that their candidate will receive the 50% of votes necessary to win, that they have announced that Margvelashvili will drop out of the race if a runoff election is deemed necessary. Most observers, however, doubt that the elections will come to a runoff or that the Georgian Dream’s candidate would actually give up the Presidency under these circumstances.

Parties & Politicians of Past and Present

The history of Georgian politics since the fall of the Soviet Union is a tumultuous one. The Presidency of Zviad Gamsakhurdia, Georgia’s first democratically elected President, was characterized by violent unrest in South Ossetia, a coup d’état in 1991, a civil war in 1993 and eventually, the President’s mysterious death that same year. After the 1991 coup, Eduard Shevardnadze, a former Soviet Minister of Internal Affairs, became de facto President without any formal elections. His rule was known for widespread corruption and nepotism. In 2003, a young Saakashvili led mass protests against Shevardnadze's regime following a parliamentary election widely seen as rigged. In the wake of the 2003 Rose Revolution, Georgians voted overwhelmingly in favour of the young opposition leader, ushering him to power in a January 2004 election with more than 96% of the vote.

Saakashvili, however, did not serve his first term in full. Resigning in November 2007, fourteen months before the end of his term, he was then re-elected for a second five-year term in disputed early elections in January 2008. Now, almost a decade after coming to power, Saakashvili’s reputation is in shambles. Even after a disastrous war with Russia in 2008, it was last year’s release of graphic videos showing the torture and sexual abuse of prisoners in the country’s increasingly privatized prison system that appears to have been the nail in Saakashvili’s political coffin. While he was originally seen as a proponent of democracy, supporting a free market agenda and stronger ties to the West, his time in power was characterized by a variety of scandals of a decidedly undemocratic nature. Under his leadership, the United National Movement made a concerted effort to control the courts and major TV stations. It also forcibly appropriated the land of citizens without offering adequate monetary compensation, upped surveillance, and created an archive of hundreds of tapes containing footage of the private lives of individuals that was destroyed only last month.

Since last year’s parliamentary elections, Saakashvili has remained President and head of the United National Movement, while Ivanishvili’s Georgian Dream has controlled the parliament. The power sharing arrangement has been tricky, however, as Ivanishvili and Saakashvili have barely met with one another and Saakashvili has taken every opportunity to veto legislation proposed by members of the Georgian Dream. With a new President elected and Ivanishvili resigning as Prime Minister, the next few weeks will usher in an important phase of transition for Georgia’s political landscape.