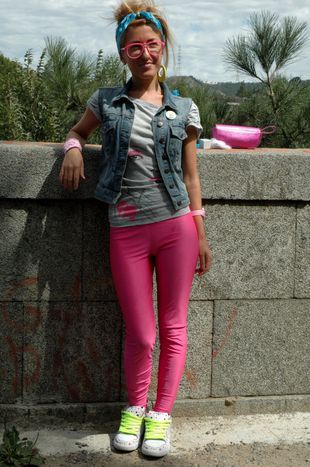 Between 13-16 October, Tbilisi will be all blitz and glamour instead of rockets: designers, buyers, models and fashion hype gather in the Georgian capital for the second edition of fashion week

‘The idea of a fashion week is certainly not new when you see the number of similar events organised all over the world,’ says Natali Samadalashvili, president of the Georgian fashion group and one of the initiators of the Georgian fashion week project (GFWP). But frivolity might have been harder to implement in Georgia. ‘Organising fashion events, especially during an economic crisis, is difficult.’ Nevertheless those who think that fashion can develop only if the country is rich are wrong. ‘Sometimes we ourselves are surprised at how we can do it. But here we are used to making something from nothing.’ Is this Caucasian style or can it join the do-it-yourself cult; after all, in Georgia, the average monthly income is around 150 euros (or £131).

‘Georgia is ready for fashion’

The second Georgian fashion week takes place at the national theatre onRustaveli Avenue, the Georgian version of Paris’ Champs-Elysées, from 13 - 16 October. ‘Georgia is ready for fashion weeks,’ adds one fashion blogger, Taa Morchiladze, adding that the first edition in autumn 2010 was a real success in Tbilisi. ‘Lots of people got acquainted with Georgian designers collection. GFW nearly became a part of the local life.’ Fourteen national designers as well as foreign guests and buyers are expected to take part in this event. Designers such as David Koma will apparently be paying a visit to his home country. The 24-year-old studied at London’s central saint martins college of art and design and is now one of the favourites on European catwalks.

Some of Koma’s compatriots have it harder. Menswear designer Keti Chkhikvadze started her career in Kazakhstan a decade ago. After fundraising to start her business there she returned to Georgia, where she opened her show room The Fashion House. Keti Chkhikvadze notes that the main difficulty for young designers of the region is to find sponsors. Her name was better known after the first edition of Georgian fashion week, she realised. ‘Customers were more interested in the suits, but it didn't solve all of my financial problems,’ she adds. ‘Without invitations to fashion events abroad, it would be problematic for me to continue working.’

Georgian designers still have a long way to go to before ruling their region. At the beginning and as a priority, they need to win the confidence of local and international buyers. The fashion week also creates a sustainable fashion platform for the region. But Keti is full of confidence that fashion has much to say in Georgia. ‘If we work, everything will surely pay off,’ she says. No doubt this would also please the objectives of Mikheil Saakaschvili’s government. Fashion is also a political weapon. ‘It’s impossible to do anything here without governmental support, especially abroad,’ explains Natali Samadalashvili. That might have been the reason why Maka Metreveli, the wife of the head of the Georgian parliament, is now a member of the official fashion week committee.

‘It’s impossible to do anything here without governmental support, especially abroad’

In Natali’s opinion, GFW supports the local fashion industry but also ‘improves Georgia’s image abroad’. Since the 2008 war with Russia, Georgia has been trying to rebuild its image. After the 2003Rose Revolution, the democratic hopes opened by the Saakachvili era collapsed. Political and social structures of the country weakened and a massive amount of population is suffering from poverty and exclusion. ‘Fashion week is about letting the whole world know how talented and creative the Georgians are in their essence,’ says Natali. Certainly Georgia is small market, but they are hopeful it will grow. ‘That is why the South Caucasus exists,’ finishes Natali.

By Guler Mehdizade and Ovsanna Bagumyan. This is the first in a series of articles published by cafebabel.com's partners this autumn, EuroCaucasus News. The journalism, multimedia and Europe project for students from Armenia, Azerbaijan and Georgia is organised by Canal France International (CFI). Read more information on the blog