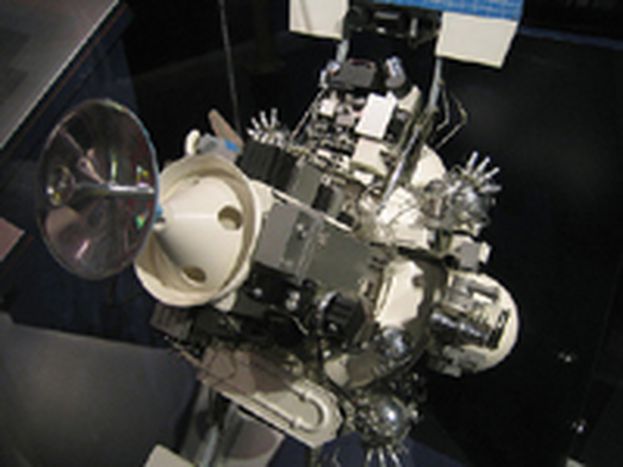 Galileo satellite: the Airbus of space

After Europe created the Space Policy, its principal satellite navigation project 'Galileo' is still paralysed by disputes between private companies in the international consortium

10 May was the deadline for the eight companies to form a joint venture and choose a chief executive. Missed. Galileo, Europe's ambitious satellite navigation programme, is a joint public-private partnership, combining the efforts of the EU and the European Space Agency (ESA). In the light of the private sector’s continuing disagreement, the public sector will need to bring in a bigger part of the 4.9 billion Euros necessary for the project to continue. It's an issue that provoked hard oppsotion by the USA whilst now, EU Commission Vice President Günter Verheugen has labelled the project as a 'stupid' one.

In 2003, it was hoped that Galileo would be up and running by 2008. Today, optimists estimate the project being completed by 2012 at the earliest. Verheugen strongly affirmed (American Global Positioning System) that 'we don't have an option of giving up on Galileo. That's out of the question,' during a presentation of EU Space Policy on 26 April.

After the crisis where the European constitution was stalled in 2005, the Galileo project has a lot of potential to boost a sense of European identity, in proposing Europe as a joint economic project. Galileo’s many commercial applications include in-car navigation, air traffic control and cargo trafficking. It can also be used in search-and-rescue operations, emergency management and the exploration of oil and gas resources.

Space and satellite navigation are fast growing markets. The EC estimates that the market for global navigation satellite systems (GNSS) was worth 60 billion Euros in 2005, is growing at 25% a year, and will reach 400 billion Euros by 2025. Galileo has the potential to make large revenues and create as many as 100,000 skilled jobs as a part of a larger value chain. According to a study done by Euroconsult in 2002, every Euro invested into the space applications generates a turnover of 7-8 Euros due to development of industries that need the satellite infrastructure to take off.

However, investing in space is a high-risk project. There is no guarantee that Galileo will win business, especially since the American Global Positioning System (GPS) already provides positioning data to public and commercial agents alike for free.

But the European constellation of the 30 satellites which Galileo would send into space can also have important strategic value. Currently, Europe depends entirely on the GPS system, which can be switched off by the Pentagon at any moment in case of a political disagreement. The US, world leader in the space race, feels uneasy about Galileo, fearing that its services could also be used to guide ballistic missiles. Russia, China, Brazil and India are also currently investing in space industries. If Europe fails to conquest space, it risks becoming irrelevant.

Europe loses its edge with holdups

The delays caused by the many disagreements between the European companies responsible for managing Galileo may put the project at risk of losing its economic viability. Had it been introduced in 2008 as planned in the 2003 White Paper, it would have had a competitive edge, providing satellite-positioning services with the best accuracy worldwide.

Versions of GPS, the Russian GLONASS system and China’s Beidou ('Big Dipper') system are due to be upgraded by 2012. Galileo might have to face ruthless competition from the very days it becomes operational. However Didier Seivre, of the ESA Navigation Department, explains that these issues are not as worrisome as they appear. 'Our competitors have delays as well,' he says. 'From the information we have right now, neither the American nor the Chinese satellite systems will be upgraded before Galileo is up and running. Four years of delay is not really much in the case of a programme as large and ambitious as this European one, especially since our competitors are facing similar issues.'

Organisational structure is Galileo’s main problem. Seivre points to the concession agreement which should have been signed in 2005. It currently still awaits a final resolution on 10 May. 'We were perhaps a bit naïve when we based the organisational structure on two pillars: technological development (responsibility of ESA), and concession (responsibility of Galileo Operating Company, overseen by the EC). We can resolve this situation by letting the public authorities be in charge of a larger part of the investment in the project, and by making them responsible for both of its pillars.'

Meanwhile, Seivre mentions how the European parliament is 'deeply concerned by the fact that the concession negotiations have been at a standstill' for several months, as expressed in their April 26 resolution. In order to prevent Galileo from becoming the 'cosmic Airbus,' the EC presented its proposal to save the program on 16 May.