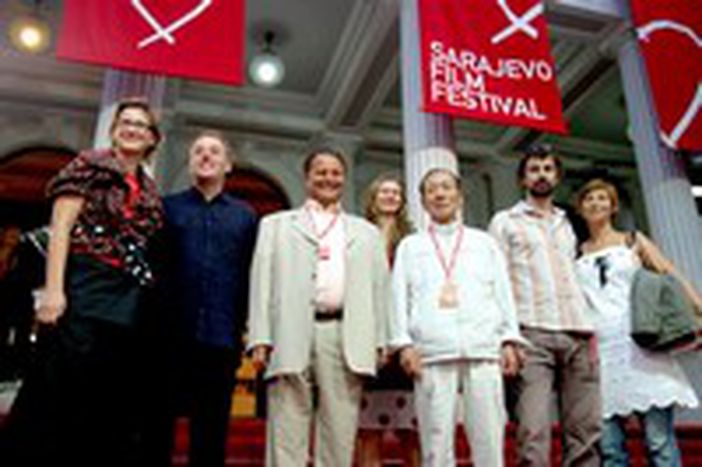 From siege to silver screen

The 12th Sarajevo Film Festival, which ended on August 26, featured a packed programme of challenging films, revealing the remarkable renaissance of filmmaking in the Balkans.

Just days after the red carpet was rolled up at the 12th Sarajevo Film Festival, it's impossible not to reflect on how much has changed since audiences were forced to dodge sniper fire to attend screenings in a basement during the first festival, which was held when the city was under siege.

From 18 to 26 August 2006, the previously deadly streets of Sarajevo were decked out to welcome its hosts, along with stars such as the American actor Nick Nolte and U2 vocalist Bono, and 100,000 movie buffs who flocked to the week-long festival to explore some of the 180 films on offer.

A new generation of filmmakers

For almost a decade, pride of place at the Sarajevo festival has been given to young directors from the surrounding region. The winner of the Best Film award in 2004, for example, was the Bulgarian Sophia Zornitsa, for her first film Mila from Mars, the dark yet tender story of disenchanted youth in the post-communist era. There was no shortage of young talent on offer at this year's festival either, with seven out of nine nominations for the official contest going to debut features.

This year's Sarajevo Film Festival did an excellent job of mirroring the energy of contemporary Balkan cinema, which is driven by a new generation of directors. The president of the awards jury, Bosnian Jamila Zbanic, 31, took centre stage at this year's Berlinale, where she was awarded the Golden Bear for her debut feature Grbavica, a dramatic portrait of a mother and daughter living in Sarajevo during the war in ex-Yugoslavia.

Another wunderkind at Sarajevo this year was the director Danis Tanovic, 37, whose first feature film, No Man's Land received the Best Script prize at the Cannes Festival in 2001. Despite his success, Tanovic is less than keen to be seen as a standard bearer for the current revival in Balkan cinema. "South eastern Europe is a hot bed of young talent, which I think is great. But filmmaking is a very personal affair. I don't think I'm a role model for young filmmakers here. Some are more talented than others and definitely don't need advice from me on how to make a good film."

One of strange paradoxes of this year's film festival was the fact that many of the contest entries had few qualms about combining the fresh, original approach of young directors with a more serious tone that was both painful and thought-provoking.

There's no doubt that Balkan cinema is experiencing something of a golden period, riding a reassuring wave of energy and creativity that stands out from the current malaise affecting contemporary European cinema. The mise en scene in many of these films, for example, bears all the hallmarks of professionals directors, despite the fact that they fail to fit into the classic film industry mould.

The war that raged in the former Yugoslavia for more than 4 years remains a major component of the region's vibrant film industry. The experience is deeply engrained in the minds of most of the directors featured at Sarajevo

this year, and still exercises a powerful hold on the way they see the world and represent it to film.

The films produced in the Balkans today, however, are far more likely to centre on the events that followed the conflict than to depict scenes from the war itself. Nafaka from the Bosnia director Jasmin Durakovic, explores

the difficulties encountered by those who survived the siege of Sarajevo as they try to adjust to "normal" life again. Faced with fairly dire economic circumstances, the choice often boils down to enduring the humiliation of

unemployment or earning easy money by trafficking a bewildering range of goods.

The scourge of human trafficking serves as a backdrop for a feature film by Croatian director Branko Schmidt, The Melon Route. This portrait of a dramatic love affair between an aimless small-time smuggler and a young

Chinese woman en route to Germany is filmed with sensitivity and a real eye for beauty. Schmidt's intention was to show how this lucrative business has become the everyday story of thousands of people living in the Balkans

The pain of exile also features highly on the menu. Andrea Staka, a Swiss director born into a Yugoslav family, presented her debut film Das Fraulein, at the festival. Voted this year's Best Film, it explores the highly complex

situation in which many citizens of ex-Yugoslavia now find themselves. After fleeing to Europe or the US during the war, these exiles are torn between the guilt of having abandoned their roots and the guilty satisfaction of living a better life abroad. Das Fraulein was also awarded the Golden Leopard at this year's Locarno Film Festival, which stands as proof, of any were needed, of the high quality of these awards.

Sarajevo is the only festival in the world that tells us as much about film as it does about a city - a city that is gradually shedding its martyr image and building a new reputation as a capital of culture. Sarajevo: a Film Festival or cultural therapy?