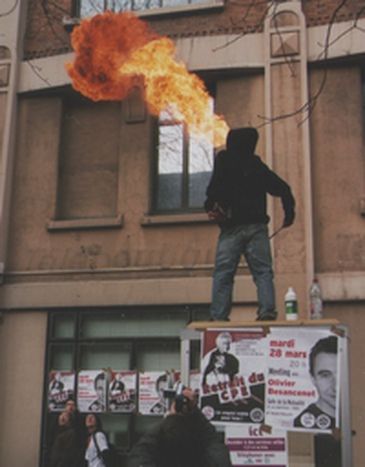 French workers in the shadow of the old order

On March 28, France will prepare itself for another round of strikes and protests against new work legislation. These protests reveal a much wider malaise in French society

On one side will stand the students, protesting against the first job contract (CPE), legislation that would mean for the first two years of employment an employer could fire people under 25yrs without giving a reason. They are protesting from inside the state: looking out at the precarity which might come.

Attacking them last Thursday, 24 March, were the casseurs, or protest breakers, angry at a society from which they are systematically excluded: consigned to tower blocks on the edge of cities where unemployment can run as high as 50%. They were attacking a society which leaves them marginal.

What the two sides have in common is much more than the CPE.

The CPE was introduced as a response to November's riots in the banlieues. But it is applying a plaster where open-heart surgery is required. In applying only to the young it threatens to broaden the divide between those who already have secure jobs and those who find themselves outside the system. It is also unlikely to be effective: it adds merely another layer of bureaucracy to an already complex employment code.

This is not to say the protesters are much better. The trade unions have tied themselves to protecting the security of those already sheltered by the French state, leaving aside the most disadvantaged: the young and the unemployed.

The comparison with 1968 is misplaced. The 68'ers dreamed of change and the toppling of the state; today, the French youth find themselves in a situation where they are battling against the state to conserve it. In this context it was instructive to see that in a recent survey, what most French youth want is a stable civil service job.

The problem is the state can't provide that anymore. Unemployment is running high, and job creation crippled by restrictive legislation. The UK has found that rather than trying to provide state based security for its citizens, the best insurance against precarity is the knowledge that there is another job available. But rather than find ways to live with a more flexible job market, the left wants to retreat to old certainties. But the retraction of the CPE will do nothing to change the problems in France.

Unfortunately, it is not simply work legislation that needs to change. The movement against the CPE is not just about the CPE; it points to a much wider malaise in French society. In the face of a state which is unable to offer immigrants a genuine hope of integration, and which is increasingly unable to guarantee security to those already integrated, the response has been silence. Last November in the banlieues, the discourse was one of burning cars, not of possible programs. It is this uncertainty about what is to be done that unites the students with the banlieues. This is a society which lacks a common language to talk about its problems.

Jacques Marseille, a professor at the Sorbonne, claimed in Le Monde that "the rupture has always been a part of our history." In this line of argument, France has never been able to progress gradually, but needs crises to move forward. If this is true, perhaps the current crisis is an opportunity, and perhaps the worst thing would be if de Villepin retracted the legislation and France slumbered again.