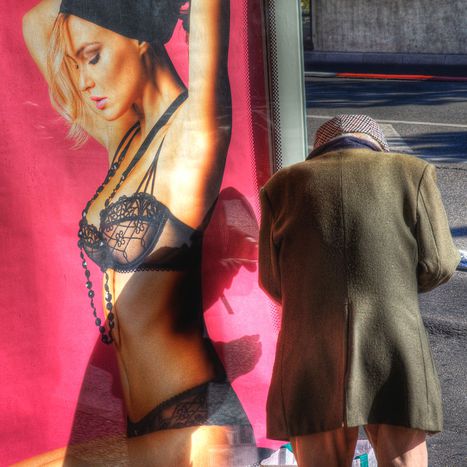 By Martynas Galkus Having spent a year in the French capital, a Lithuanian writer here deconstrucs the French ways of seducing, using the ideas of Spinoza and Bauman. Phiosophical and anthropological sketch.

My friend is blonde. (I’m not referring to her mental abilities). Her hair nicely fall behind her ears adding to the attractive appearance which doesn’t get unnoticed in a bar where we are now during her first visit to Paris. One young gentleman approaches and asks the time (give me a break!). As she turns away from me, they chat and after a couple of minutes I hear from him ‘I like your earrings very much, they suit your beautiful face very well’. Phone number exchange, and he leaves. Got what he wanted, maybe will get even more later. Scenarios like this reel several times before my eyes during the first couple of days in town. Sometimes she withstands the attacks, sometimes she doesn’t.

I believe one good way to describe French ways to chat up and seduce is that of form over substance. It is rather form, because has mainly to do with appearance, smiles and compliments. It is not substance, because this way you get to actually know the person in front of you only very little. Spinoza has said that we have to ‘eliminate as far as possible our inadequate ideas, which follow’ from our body being affected. If we can achieve this, then we will be ‘free’ to the extent that we will ‘become active, autonomous beings‘. Indeed, writers and philosophers from Spinoza to Fromm to Bauman have stressed the dangers of preferring the hollow, physically-based human communication over sane relations. Bauman has called this ‘liquid love’. As he has remarked, ‘there are solid enough grounds to see love … as … a recurrent condition, amenable to repetition, even inviting repeated attempts… One can guess … that in our times the ranks of people who tend to attach the name of love to more than one of their life experiences, who would not vouch that the love they are currently experiencing is the last, and who expect there are more such experiences yet to come, is growing fast’. This means, inevitably, ‘the easing of the tests an experience must pass to be assigned as ’love’. Rather than more people rising to the high standards of love on more occasions, the standards have been lowered… One-night stands are talked about under the code of ‘making love’’, he concludes.

While an extensive anthropological and psychological study would be needed to precisely define the French way of seducing, as well as the extent to which it is ‘liquid’, still, some main characteristics can be traced. First, it seems to me that the more refined (and hollow) the methods are, the more successful the French are in their pursuit to seduce. This is especially true with girls from countries that are said to have a more reserved national characters, which is demarcated by the North-South division in Europe. Second, an intelligent eye is quick to notice bodily proximity, eye contact, compliments and abundant verbal communication in general, which all together help establish a psychological proximity between the ‘interlocuteurs’ and a sense of ‘knowing’ the person in front of you.

Compare these liquid encounters to music. I mean hollow pop music, like Britney Spears, and classical or jazz music. The former kind of performance is glittery, exciting, eye-catching. Just like the French seduction ‘performance’. The latter is more demanding and difficult, but more rewarding at the same time

In the beginning, I spoke of my friend who falls for ‘pop performances’. Do you have a friend like that? Or are you one? You don’t have to be, know it. Listen to good music. Be more subtle. Choose your French encounters. Don’t give in.