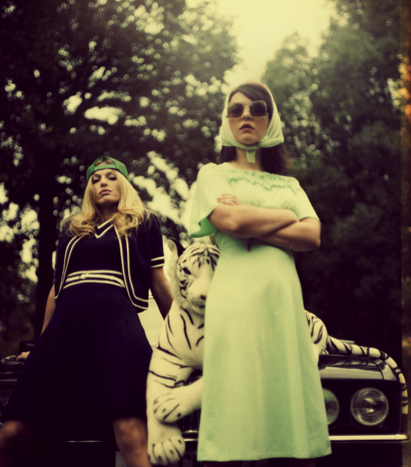 French duo Brigitte on 'the mother and the whore'

There are certain groups that cause disturbances of a psychoanalytic nature. Halfway between glam and eroticism, the female duo Brigitte, aka Aurelie and Sylvie is one of those. So, it was necessary to kill the father. Interview

It is strange. Generally, the music of our era evokes something in us, because it uses tones that stem from our earliest childhood. From Enzo Enzoto Suzanne Vega, our parents’ songs allow us more or less to be set in a paradoxical music universe that, at the same time of brooding quite a few things from the past, comes up with new types of music from the shambles. Year in, year out, actually. It happens sometimes, though, that what one could call a 'music project' reroutes, since it is detached from our puberty. It is so detached that it could even dismiss all the Freudian analyses on the question of, let’s say, 'the symphonic incest', by itself. Anyway, it’s new. For better or for worse actually.

Brigitte helps to kill the father off. This 'project', born to Aurélie Saada and Sylvie Hoareau, caused my navel to hurt a lot. It has nothing to do with anything. The duo cut the umbilical cord from my references and caused a certain turmoil in my young adolescence. Before giving birth to the group - a tribute to eponymous influences they cite as Brigitte Bardot, radio presenter Brigitte Lahaye, singer Brigitte Fontaine (and even 'Brigitte, femme de flic', after a famous song by former rap band), the two French singers were respectively known as Mayane and Vendetta. It was cute, it was nice. Nowadays, Brigitte produces 'a sound that makes the bandits bend' (in reference to violent lyrics of the French rap group NTM - ed). In their first album And You, Do You Love Me ('Et vous, tu m’aimes'), the sixteen tracks sound like a three-day pass to sensuality. I try to think of Brigitte as the voice of the Little Mermaid – sexy and provocative. But in this case, it would have been necessary to keep an eye on the sexual education of quite a few kiddies. I meet with my psychoanalytical case during a press conference for the rainy solidays festival in Paris; it's Sunday, and one wears a sunhat, whilst the other masters a trench-coat. Brigitte is elegant. Brigitte is disarming. Interview.

cafebabel.com: To explain how you met, you talked about 'marriage'. What kind of relationship do you have?

Brigitte: We obviously have a very intimate relationship. It’s always something quite special to write with someone. We talked in a coffee shop about our lives and then, the idea of this project came to us naturally. Now, there is so much trust, that we really write like when we first met: telling the story of our lives. We like to use each other as inspirations to create the fantasy, by passing the ball. That way, when we write, we are responsible for everything we say. To write and sing something like 'j’ai tellement besoin d’amour' (I need love so much) could seem ridiculous. Even for us. But we do it. We have no limits nor complexes.

cafebabel.com: Brigitte is quite a new sound; do you have any strong musical influences?

Brigitte: No, we don’t have any references. We dug into our lives and we both have different styles; the result was something not so common. We have included the music that our parents used to listen to in our sound. We don’t want to be part of a particular clique. Besides, we have as many cinematic influences as musical ones. The films of John Cassavetes, for instance, inspired us a lot. We were looking for a certain balance in all this. After all, we have been making music for a long time and we have really had the time to digest all our influences.

cafebabel.com: You have often referred to Brigitte as a 'mums’ project' (as you have two children each), but some titles, such as 'Ma Benz' (My Benz), 'Battez-vous' (Fight) and 'La Vengeance d’une louve' (The vengeance of a she-wolf), bring a certain feminine rage to mind. Do you have a certain view on women?

Brigitte:And You, Do You Love Me is an album that we could have certainly not made two decades ago. Nowadays, we try to play with the balances: the frail and the strong, the light and the profound, the mum and the whore. We accept that it is of course a side that describes us. We have been sometimes asked whether we are feminists. No, we are not activists. On the other hand, we are bearing a womanhood. We just try to be ourselves.