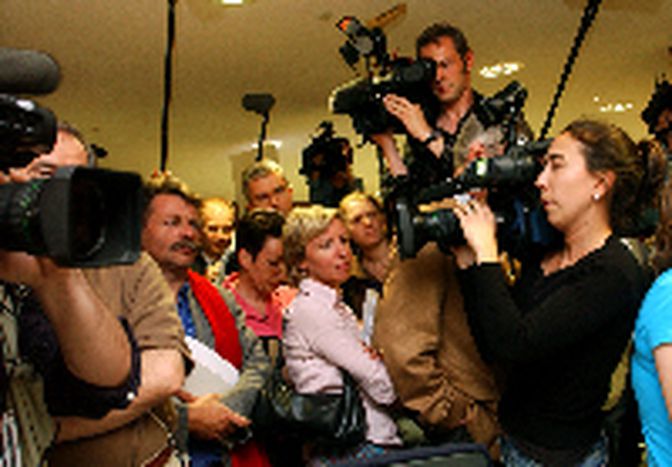 Freedom of the press under fire

Freedom of the press in the EU is respected, but not guaranteed. With major differences between Eastern and Western Europe, the protection of information is at risk

A simple click. Then the statement, ‘Your email has been sent,’ pops up. It sounds harmless enough. But the sender is now aware that his details are being systematically logged. By the EU.

In December 2005 the European Parliament voted in favour of a directive that tried to harmonise the different data protection laws of the member states. The directive allowed telecommunication companies to conserve personal data for a period between six and twenty four months. The police service can request this data and know who is communicating with whom.

According to the German Association of Journalists, this has opened the way for mass surveillance of journalists and their contacts. The Association states that ‘these guidelines endanger the freedom of the press and the protection of information.’ ‘If informants can no longer be sure that telephone or email contact with journalists stay secret,’ it adds, ‘they will think twice about contacting the press’.

What should be considered?

With 25 different countries, the EU juggles with 25 different traditions and cultures and as many completely different national legislations. The EU commission does not possess the necessary competence to create a European law which creates a uniform system in the interests of the freedom of the press.

It is written in Article 11 of the Charter of fundamental rights of the EU that, ‘freedom of the media and their plurality are respected.’ Respected not guaranteed. ‘We feared that national sovereignty could be endangered, and the originally planned guarantee of press freedom is today under greater pressure than ever,’ states European Deputy Karin Junker. As well as being part of the Party Executive of the SPD, she is also a member of the West German Radio Broadcast Council and the Arte Programme Advisory Boards. She knows all too well about media issues at EU level. Although Junker criticises the weak formulation of the Charter of fundamental rights, she admits that, ‘if I lived and worked in another country, I would be subject to their laws and regulations - whether I agreed with them or not.’

In some of the member states the European Association of Journalists sees alarming developments in the area of media concentration. In Ireland for instance, Independent Newspapers Ireland, owners of the biggest selling daily, The Irish Independent, have a market share of 48%.

Even in the Netherlands, which tops the league table of Reporters Without Borders, media concentration is becoming problematic. In the television sector, the public broadcaster NOS and the German commercial operator Bertelsmann jointly control 85% of the market, while just three companies cater for 83% of the newspaper readership.

EU enlargement will worsen the problem, claims Marc Gruber, vice-president of the European Federation of Journalists. He says: ‘We regret that new candidate member states were not asked as a condition of entry to establish a strong public broadcasting system and guarantee the freedom of the press and media pluralism.”

In Poland, Czech Republic and Hungary, around 80% of the press has been bought by Western European media groups. According to Gruber, the local press are fighting a losing battle to keep their share of the market. Worse still, in the Ukraine, journalists speaking out against the state are still subject to violence attacks. In Poland, a publisher was been ordered to pay 5,000 euros in 2005 because one of his papers was accused of insulting Pope John Paul II.

Citizens are quite rightly asking whether EU officials have given enough thought to the freedom of the press. In defence, European official Karin Junker stated that ‘they couldn’t achieve everything.’

First steps in the right direction

Progress has been made nonetheless. Thanks to the EU there is a law protecting freedom of information in all member states. Official documents have to be comprehensible, readable and publicly accessible. Authorities must give out information about all types of activities including delicate issues such as finance.

The field of television also shows signs of improvement. The guidelines ‘TV without borders’ set out conditions for the transmission of TV programmes across the European market: free transmission of TV programmes, protection of cultural variety, protection of minors, the right to reply, advertising rules, and sponsorship of European productions are just some of them.

However many questions remain. Why are rules and regulations limited to television broadcasters? What about radio, print and online media? In the future how can the critical stance of journalists be guaranteed if the new guidelines lead to a systematic surveillance of telephone and internet data? Only one thing is clear. As long as the sovereignty of culture and media are guaranteed by states, there can realistically be no protection of the freedom of the press at the European level.