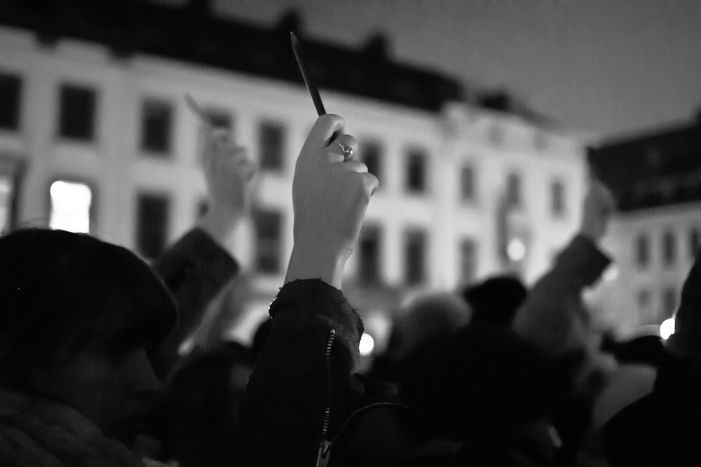 Freedom of Expression in the Charlie Hebdo Aftermath

Shock. Sadness. Anger. All of these emotions describe how Europeans have experienced the aftermath of the Charlie Hebdo attack in Paris yesterday. Our editors explain how these events shook them to their core and the ramifications on freedom of expression.

Matthieu, France: "You are not directly affected by a violation of freedom of expression. It's something nagging. First, you are surprised by the fact that one can deal with it, without really understanding it. Then, little by little, you realise because you see the faces they represent, you understand you will not see them anymore and you think once more about the ideals they symbolized. And now, at this point, it hurts. It's weird because usually I do not like big words. It’s weird 'cause I also have a hard time to stand up for something. But today, it's difficult. I am sick at work. I feel bad when I walk around town. Maybe a little too fragile. Allo maman bobo. (The last four sentences are lyrics from the song ‘Allo Maman Bobo’ by Alain Souchon)."

Katha, Germany: "Shocking to see how fear spreads immediately after the attacks on the satirical newspaper Charlie Hebdo throughout the country. Yesterday, I felt the need to be part of the solidarity gathering at Place de la République. The police closed the metro station in fear of a terrorist attack. I hesitated. I was tired, my baby was tired. But still, I want him to grow up in a world where all things can be said, written and drawn. I come from a country where this was not possible (DDR), but have grown in the luxury of freedom of expression later on. 25 years after the fall of the Berlin Wall, I am not willing to let fear rule over this human right."

Katarzyna, Poland: "Two things shocked me the most, one being the comments supporting the terrorists which appeared on the net after the attack. I am sure my colleagues will talk about it, therefore I will concentrate on the second thing, namely people who didn' t care. Yesterday, I was shocked and terrified to see some people talking about sales in shops like some scary consumerist monsters for whom buying things was more important than showing solidarity for those killed yesterday. The aftermath of these events that I am the most afraid of, in turn, is the increased surveillance, espaecilly in public sapces and in the internet. I am afraid that we can see our civil liberties considerably restricted".

Cecilia, Italy: "Yesterday morning, my first thought had nothing to do with journalism. First, there were people in a room, talking to each other. Some minutes later, there was nothing else but blood and fear. I am shocked because it is an attack against freedom. I am shocked because for some people – maybe my neighbour – this carnage is not a problem. “They deserve it.” “They should change the way they were working.” Finally, “They made a mistake.” Here we are: a pen could be more dangerous than a kalashnikov, isn’t it? As a poem said “When they came for the writers and the thinkers and the radicals and the protestors, I turned away (…) And when they came for me, I turned around and around, and there was nobody left...” So, shut up, journalists, illustrators, human beings: your miniskirt was too short and provocative."

Ainhoa, Spain: "One of the things that shocked me the most about yesterday's attacks is the opposition that people showed through the social networks and the streets. The protests weren’t only in order to condemn the murders. They were also a unanimous shout against the willing to repress the freedom of speech. Pens, press cards and illustrations where thrust into the air as a symbol. People said no to those acts but also that we all can express ourselves in different ways. Another thing that shocked me was that, by doing this, the extremists give reason to what they want to censor. 'It’s difficult to be loved by idiots', said Muhammed in a caricature of Charlie Hebdo. This act committed by this people has no other adjective."

Kait, Canada: "I am quite saddened by the death of 12 people yesterday and it is shocking that this could happen in France. However, as shocked as I am and how much I disagree with their actions, I also found most of the Charlie Hebdo covers shocking, offensive and distasteful. In Canada, as in many English-speaking countries, our commitment to freedom of expression is weighted with the respect for social differences and aim to avoid creating social division. Most British and North American media wouldn't dare publish the covers of Charlie Hebdo because of this politically correct sensibility. I stand by my colleagues in British, Canadian and American media in their decision not to publish the most controversial images, many of which are offensive, as to not provoke further acts of hatred or violence, but also out of the outmost respect for the differences within our multicultural and diverse societies."