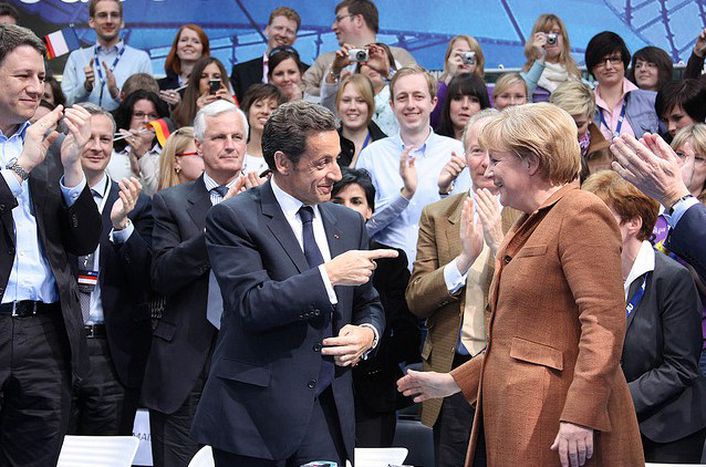 The revival of the German-French axis after the numerous discords of recent years should be greeted with pleasure. Yet in the Merkel-Sarkozy era there is not much left of what was once the ‘driving force for European integration’. A Franco-German ‘competitiveness pact’ suggests a lost sense of solidarity and a deep distrust of EU institutions

On the sidelines of the European council summit on 4 February in Brussels the German chancellor and the French president were eagerly promoting the ‘competitiveness pact’ proposed by the German government. This provides for a euro crisis mechanism and closer coordination in terms of economic policy between the seventeen eurozone nations. It is true that Berlin, which had resolutely rejected the French idea of a European economic government up to that point, is therefore also finally acknowledging the fact that monetary union cannot function without closer cooperation in economic policy.

Reports from the EU council summit from cafebabel.com Brussels blog

Yet, contrary to the way it is being publicly portrayed, the German proposal by no means stands for greater European integration. On the contrary, it stands rather for a step backwards towards intergovernmental decision-making processes without the established European institutions having a say. In addition, even in the case of issues which are politically highly sensitive, the democratic control of the executive body is to be bypassed, almost unnoticed, by the national parliaments and the European parliament.

More power for heads of government

This is because, in accordance with the wishes of Angela Merkel and Nicolas Sarkozy, the eurogroup nations are to submit to common aims in future in the case of wages, pensions and taxes in order to make the euro more stable. However, these aims would not be defined in the course of proper European legislative procedure involving the participation of the European parliament, but by an exclusive group of the seventeen heads of state and government concerned. These people could then decide on guidelines for key policy areas such as the budgetary or social policy over the heads of the national parliaments and the European union and without including national civil societies. It's a clear rejection of the community method which has distinguished the EU as a supranational organisation to date.

Typically, the harshest criticism of the German-French initiative has come from the Luxembourg prime minister and chairman of the eurogroup, Jean-Claude Juncker, who would probably have to be termed one of the last staunch Europeans among the heads of state and of government in office. However, Juncker is not only upset, just like MEPs from all major parliamentary parties, by the bypassing of the community method. He is also offended by the notion which the governments in Paris and Berlin have of a ‘competitive eurozone’ in concrete terms. This is because Berlin is already demanding, with the self-confidence of the new economic giant in the European Union, that the German austerity policy should be widely replicated as a precaution – in particular by ‘harmonising social standards’.

In concrete terms this would mean that nations such as Luxembourg or Belgium would have to give up their social partnership model in which wages are automatically adjusted to the rate of inflation, and that all member States would have to make a commitment to gradually bring their retirement age into line with the German age of 67.

This is a particularly explosive subject in France where president Sarkozy has already been having a tough time for a while in respect of the trade unions and public opinion over his attempt to raise the retirement age. The idea of being able to invoke ‘binding stipulations from Brussels’ for plans of this kind in future may seem all the more tempting to the president, who is trailing in historic lows in opinion polls. Yet if things go according to the wishes of the German-French leadership, then in future the national heads of state and of government should be able to hold the reins in Brussels even more than they have done to date.

Given the serious, systemic crisis, it is absolutely out of the question for Europe to have to find new, European answers to problems which can no longer be solved at a national level. After all, it was precisely this insight into periods of crisis which continually promoted the European integration process in the past and which induced the member states to transfer national powers in return for better democratic control within the EU.

On this occasion too, a transfer of power of this kind would only be justified by an increase in democracy at a European level, for instance, by a more direct democratic legitimisation of the European commission. Yet instead of even sparing a thought for European visions, Merkel and Sarkozy would rather advance the expansion of their own legislative power. If the simplified procedure sought by Germany and France to amend the Lisbon treaty (with which the agreement of the European parliament could typically be bypassed) were to be successful in this form then it would undoubtedly be a historic step: the first step back to the past in the history of European integration.