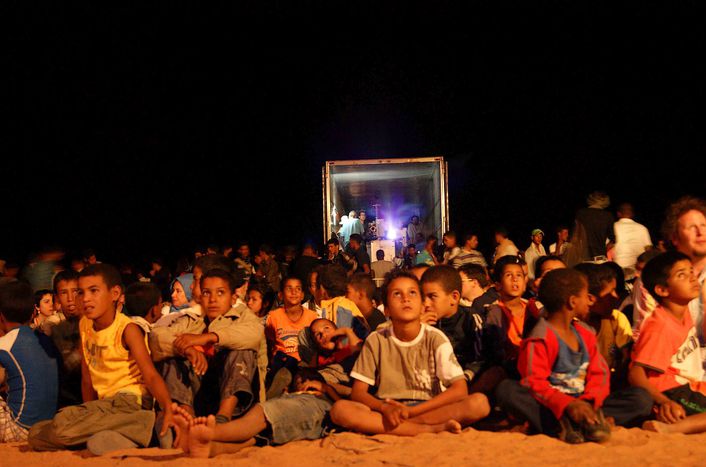 Forget Cannes - go to FiSahara, 'only film festival in a refugee camp'

It's an unusual festival created by a group of enthusiastic young Spaniards to disappear on the day Western Sahara regains its independence. Sandy perspectives from the Dakhla camp of the eigth FiSahara festival, which takes place each year from 2 - 8 May

It takes three hours to travel the desert that separates the airport in Tindouf from the camp in Dakhla, the most isolated of the human dwellings located in Algeria, offering abode for around 200, 000 Sahrawis in exile for the last thirty-five years. We reach the location following a road surrounded by sand, nothing more, nothing less. 'Not long ago, people were still dying on this road,' says Nacho, a Spanish journalist who knows the area. Things are changing in the desert of Hamada. But that doesn't happen faster than the decision-making process in the UN. Two decades ago a decision to organise a referendum on self-determination was taken, to allow the Sahrawis to decide their collective fate - the annexation of Western Sahara to Morocco or independence. They are still waiting.

When the tardiness transformed into delay eight years ago, a group of Spaniards landed, armed with film rolls, retro-projectors, cameras and a deep affection for the camps' inhabitants. Their goal has been to entertain these people, break the sandy routine made of tea, cigarettes and time to kill by injecting a healthy dose of cinema, good humour and cultural exchanges. The FiSahara festival is about give and take. It involves a tacit contract stating that the Sahrawis tell their story to the young people around the world, who in their turn, provide them with means of expression. Throughout the festival week, training workshops in sound engineering, film making, editing and production are organised by festival volunteers.

David, Laura, Carlos, Gerardo, Paz and others came to breathe positive easiness into a world of deprivation. There's nothing funny about that either. 'It's a negative sign,' says the Fisahara festival press officer, who has mixed feelings about finalising the last segment of the paved road, although he appreciates not having to spend three hours in the dunes. Carlos Bardem, one of the festival's guests and regulars, is very worried too. 'The more they build here, the more Morocco will play the done deal card. You see, there is no reason to hold a ballot since they are already here.' The debate does not settle the matter, but emphasises the paradox of Sahrawis' current situation. They are caught between their eagerness to move on as soon as possible and the desire to live in dignity, with the risk of being stuck there for a long while.

'Hamada. Do you know what that means?' It's what the first nomads to wander around the corner would have said. It's a bit like Sidi who has just returned from Libya. He is a Sahrawi who went to study in Cuba in 1988, joining 450 others. He travelled the world before becoming a civil engineer for a Spanish company and going to Tripoli as their representative. Facing the impossibility of remaining there due to the war between pro- and anti-Gaddafi militants and Nato bombing campaigns, he returned home. Many Cubarahuis follow the same route: studies abroad, the discovery of all things forbidden in the desert, obtaining a diploma, then the return to a place with no prospects for young people. 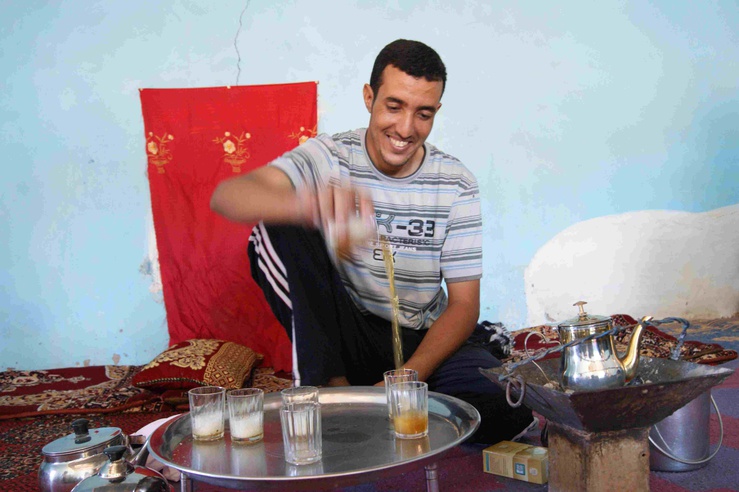 Fisahara aims to disappear at the same time with these arid camps, but it leaves here small traces of change, such as the establishment of a film school last year, where the Sahrawis create the first short films of a long series. Slowly though; here, everything comes to him who waits. There is an amazing solidarity between these young Spaniards and a culture which finds itself isolated and without a voice, whilst an entire region is in implosion stage.