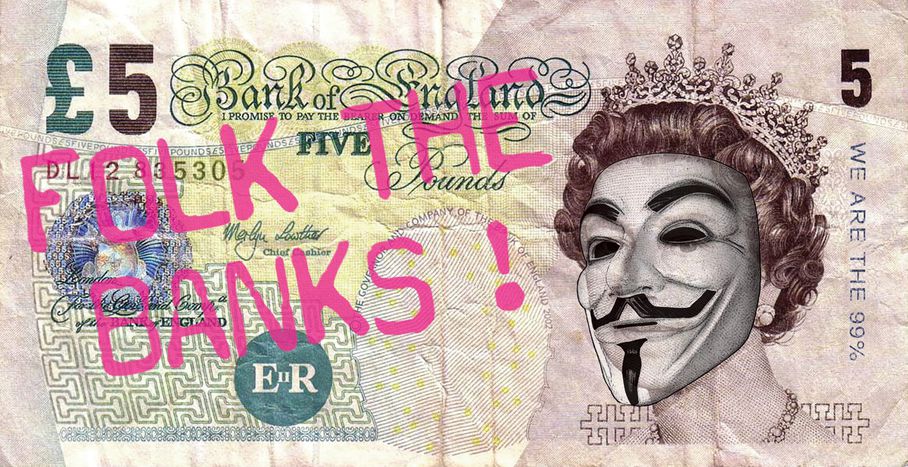 The suitably titled debut album of Occupation Records was released online on 4 June. Founded by members of Occupy London, the new label’s premier release, is intended to raise funds for the movement. The download is available on a ‘pay what you can afford’ basis. A fortnight on, close to £10, 000 has been pledged

'The wealthiest CEO’s reward themselves with million dollar bonuses while millions are out of work,’ says musician and activist Tom Morello. ‘What can we do about it? We can protest against it, fight back against it, and sing songs that do both.’ From the opening of Which Side Are You On? to the final fading notes of World Wide Rebel Songs, this is just what they do. The album includes such a diversity of music styles and genres that it runs the risk of sounding disjointed. Somehow, it doesn’t. Folk the Banks includes original tracks and covers from a variety of artists, both well-known and more obscure. 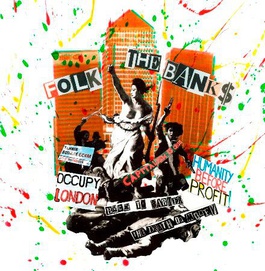 The music on this album covers a broad emotional spectrum - pain, helplessness, sadness, anger, determination, wry humour, and hope (a relief to find the last in this political Pandora’s music box). Unsurprisingly, the mood at times is dark. A sobering indictment of capitalism and greed, tracks such as English songwriter Leon Rosselson’s Money Matters expose the fictions by which we live our lives: ‘Happiness, the promised prize... Money lies.’ With thought provoking lyrics and catchy tunes, the album successfully captures the imaginations of its listeners. There is an inclusiveness about it, an appeal to join ‘us’ - the 99%, the poor, weary and exploited - against ‘them’- big bankers, the rich and corrupt, the state. ‘Which side are you on?’ demands the British alternative rocker Billy Bragg.

Different features of the Occupy movement are well represented in the music of the album, with both radical and liberal elements finding a voice. While various themes are present- concerns regarding state control/ violence/ surveillance, class war, the disparity between rich and poor - the overarching theme, and that which resonates the most, is the desire for justice which permeates the album. In the words of American folk singer Peggy Seeger, ‘the top 1% are feeling fine, we’re here to represent the other 99’. Incidentally, perhaps my favourite line in the entire album is the slyly inserted ‘you can tell we’re workers cause we’re out of work’ in her song Doggone, Occupation Is On.

The album is branded as a challenge to the music industry. One criticism is that those who buy this record are likely to be those already in agreement with the movement. It is easy to preach to the converted, harder to convince doubters. Publicity for the cause might have been heightened had they not eschewed the routes of Apple and Amazon - ‘due to labour and human rights violations as standard practice,’ states the website. Politically though, the insistence on using ethical means to release this record is a good move. Occupy intend to use the profits from the album to fund the promotion of their message. It might not make activists out of its listeners but it should at least make them think. With its ability to evoke our emotions and to suggest a sense of community, music can touch people in many ways. While the album won’t make a protestor of me just yet, it makes me glad that there are people out there who care enough to fight for what they believe in. So, I’ll keep my head down, read the articles, buy the albums, sign the petitions. But even when I seem quietly resigned to how things are, inside I’m rebelling. All I need now is a harmonica.

Ryan Harvey’s See It Through. Anger ripples beneath the surface of this fast paced song but with its breathlessness and emotionality one can’t help feeling... well...just a little bit uncomfortable. As he raps his heartfelt message I am reminded of the outpourings of a misunderstood teen. He just seems to care too much. The lyrics are good but again leave me feeling slightly embarrassed. While for the singer ‘every day brings a vision to strive for, some to live and die for’, my days generally commence with a nice cup of tea and a to-do list the length of my arm. Feeling awkward- skip.

Turn the volume up on

We Are Fucking Angry. ‘We are fighting back, and we are fucking angry!’ This rock song by King Blues just isn’t the kind of tune you can listen to turned down low. While lyrically limited there’s something about the raw energy of this track that I like. Calling for us to cut the bankers, the MPs, riot police, judges, jury and indeed all of the apparatus of the modern state, one may almost disregard the actual words of the song and focus instead on the disaffection induced by modern society. ‘We ain’t gonna take this no more.’ While ignoring the grammar, I can applaud the message. Anger might just be something we need more of.

The Old School Tie. Chumbawumba’s track is a beautifully ironic pastiche of the upper classes, plus, it’s catchy. You’ll find yourself joining gleefully in with the chorus, chortling with your chums about the riff raff and oiks ‘Barnardos boys, the unemployed... the students, the strikers, and those who just don’t like us!’ My favourite on this album, it combines all the necessary elements for a perfect protest song. For those of us who can’t call upon the old school tie, we can call upon one another. And perhaps this is what this album gives us.