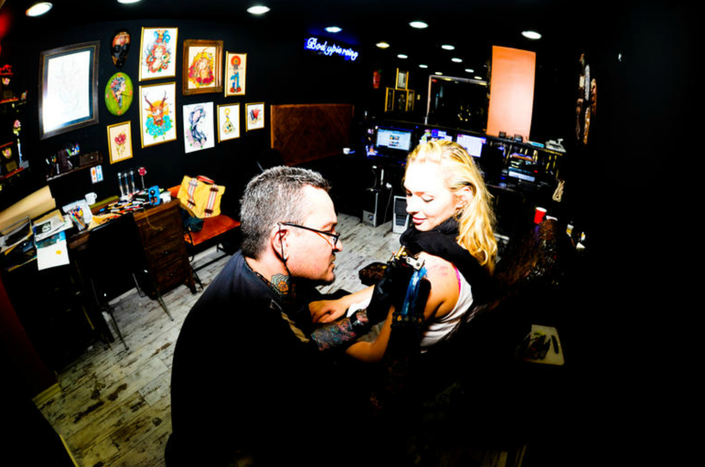 Flesh and ink: The unstoppable rise of tattooing in Turkey

The spectacular explosion of a practice that was non-existent at the beginning of the 90s, and that has been underground for 15 years, is the result of the happy superposition of technical, demographic, socio-cultural and political changes. Cafébabel Istanbul presents a brief overview of the Turkey tattoo scene.

A simple stroll through the main streets of the big Turkish cities is enough to see the evidence: In Istanbul as in Izmir or Ankara, more and more people have tasted the bittersweet pain of the tattooists needle. Proudly adorning biceps, calves, necks and wrists, diverse geometric motifs have unexpectedly appeared, from the scars and bruises of freshly pierced flesh. Freed of their chrysalis of coagulated blood, a multitude of butterflies, monochrome or colorful, subtle or more ornate, brazenly flutter across the bodies of the Turkish youth. In Istanbul, the tattoo is no longer just the reserve of bikers and metalheads.

The members of the international inked-skin community feel surprised to meet in Turkey many other members of this visible minority. Tourists, looking for orientalised exoticism, get the confusing impression of having landed in Los Angeles, Miami or on the outskirts of a Latin American metropolis.

Responding to a growing demand in major Turkish cities, tattoo salons have sprouted like mushrooms, almost on equal terms as more conventional neighborhood institutions such as the kuaför (hairdessers), the tekel (off licenses) or the countless cyber-cafes and gaming rooms. Completely absent from Turkish streets at the dawn of the 1990s, these artistic institutions are now found almost everywhere.

“There were only fifteen tattoo artists in Turkey when I started,” states Budakan Tamer (Lithium Tattoo, Kadıköy), in business since 1999, “Today, there are hundreds.” In young and dynamic districts like Beyoğlu (on the European side of the river) and Kadıköy (on the Asian side), some alleys accommodate more than half a dozen salons. 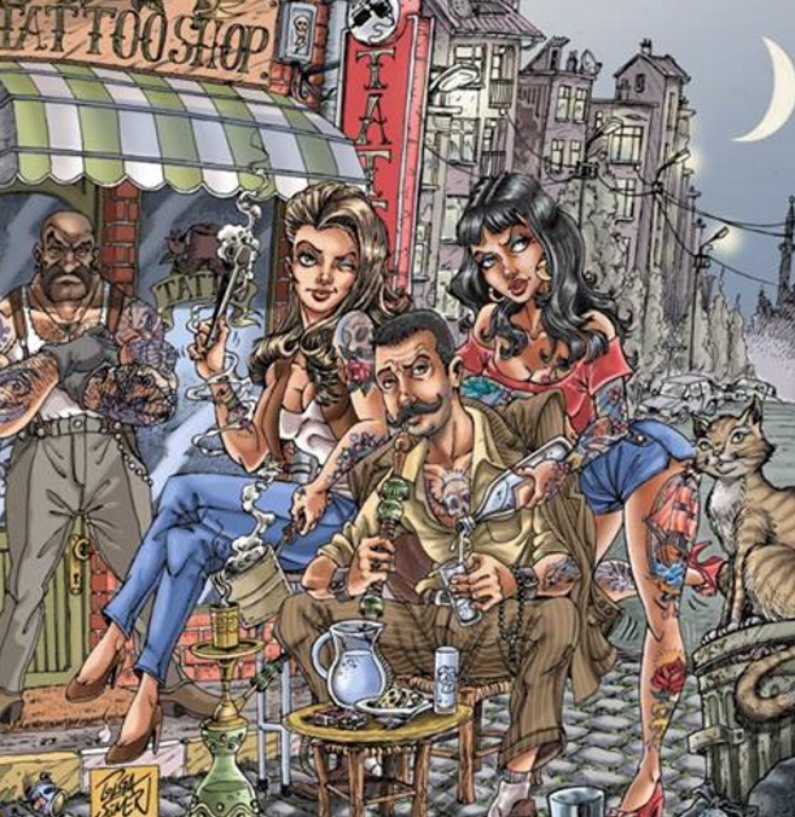 The 90s was the decade of the birth of tattoos in Turkey, but its first steps were timid and hesitant. “In those years, tattoos were something new in the Turkish Republic. There was very little demand: only one or two people per week”, remembers Cağatay Ateş (Negatif Bodyart Studio - Kadıköy), one of the oldest and most respected names in the field. The self-proclaimed musician and tattoo artist is also bassist in Afterburner, a well-known group of Turkish hard rock enthusiasts.

In his opinion, technical developments embodied the first reason for the boom of interest in the 2000s. “When I started, the equipment was expensive and difficult to obtain in Turkey. We could not rely on the Internet to order it,” he explains, “Now, many companies specialize in importing the necessary machines, needles and different types of inks. The current context is much more favorable to artists who want to start up a business. The better the equipment, the better the work you can do.”

“Fifteen years ago, the hygiene and health conditions were sources of anxiety and concern for potential customers,” continues Resul Odabaş (Resul Odabaş Tattoo Studio - Beyoğlu), one of the stars of the 2010 generation, “These conditions have improved in the same way as technology. With the media and the Internet, people are more informed about the practice of tattooing.”

The administrative conditions of the country have also improved. The first tattoo artist to ever operate in Turkey, Hakan Gerçek (Hakan Gerçek Tattoo Shop – Bağdat Caddesi), remembers the great uncertainty that the opening of his first salon represented in 1992. Freshly returned to Istanbul from England, where he had gone to study languages before contracting the tattoo bug, this pioneer was boldly sailing on a sea of ink against Turkish legislation. “It was not easy because I didn't know the law,” he explains, “Fortunately, a friend's father was a lawyer, so I consulted him. He eventually explained to me that opening a salon should not pose a problem.”

Immediately after, during the few years when he was the only tattoo artist in the country, his activity— which was only de facto recognized—was not listed in the Turkish classification of professions due to the lack of an appropriate category. Nowadays, this type of problem no longer arises, and the current generation continues to benefit from the initiative undertaken by its predecessors.

What is even more surprising is that Turkish demographics could also have an impact on the growing popularity of tattoos in the country. According to statistics provided by Eurostat, the statistical office of the European Union, Turkey is the youngest country in Europe with a median age of 30.4 years in 2014, lower than that of all the other Member States.

In other words, approximately one in two Turks is under 30 years old. This observation was made a year earlier by Turkstat, the Turkish Statistical Institute, whose report estimated that 17% of the population is aged 18-24. Without generalizing, it seems reasonable to state that adolescents and young adults represent the traditional target market of tattoo artists. As Cağatay Ateş admitted, “people who is 40 or older remain distant.”

Another major cause of the boost in popularity of tattoos is partly hidden at the bottom of cathode ray tubes and between the electrodes of flat screen TVs. “There are also pop-culture American reality shows on tattooing, such as Miami Ink, which are broadcast in Turkey”, indicates Budakan Tamer.

Broadcast with Turkish subtitles for some years on the Discovery Channel, Miami Ink and its variations in Los Angeles, New York and London have had a positive impact on Turkish viewers and the environment surrounding tattoos. “Here, they could see how tattooed people were exactly like them,” remarks Cağatay Ateş, “People who were anything scary, who had children and problems like everyone else.”

Resul Odabaş also notes how tattooed celebrities—more and more numerous—have had an active role in the improvement process noting that “people are inspired by these people, and want to wear what they wear, including their tattoos.” The advent of social networks has exacerbated this phenomenon by allowing everyone to admire the beautiful tattoo work of artists, whose names have in turn begun to make themselves known.

Finally, we should remember, like Budakan Tamer reminds us, that the rise of tattoos in Turkey can be seen within a global trend, in a market which will continue to grow worldwide, especially in emerging countries.