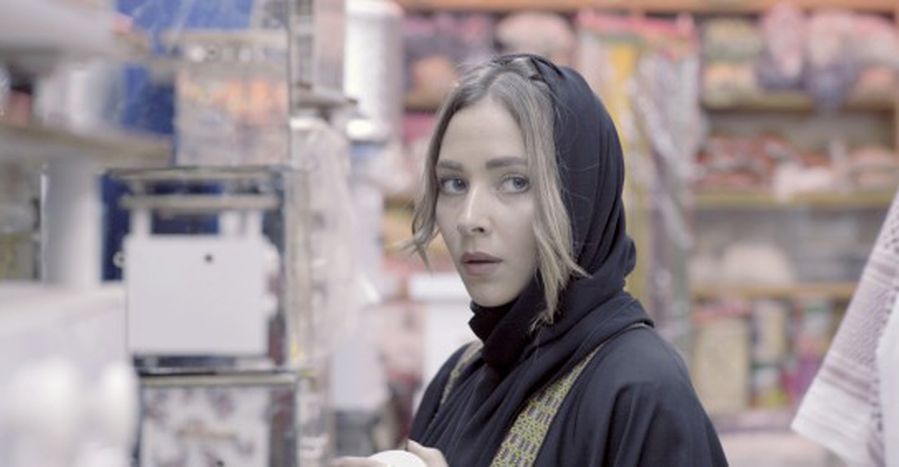 If you were to try to add up the number of movie theaters in Saudi Arabia – all commercial and independent theaters, you would arrive at the grand total of one. Very few film industries in the world are as restricted and as impoverished as in the desert kingdom. That fact alone would have been enough to make Barakah meets Barakah remarkable. Yet the beauty of this film goes far beyond the impressive logistical (and political) accomplishment of getting it made. It is is also wholly entertaining and an admirable work of art.

The film is being touted as the first romantic comedy to come out of Saudi Arabia, a label which the director Moahmoud Sabbagh only reluctantly accepts. It traces the clumsy courtship of Barakah, the municipal worker, and an instagram star, Bibi. As the two try to nurture their fledgling feelings, a third character, the omnipotent repressive society, emerges to foil their attempts. They must figure out how to actually get to know each other without having to get married. In one scene Bibi outlines the impossibility of the task: they could go to the beach, she imagines... but face being caught by the religious police. They could go to a restaurant... but face being caught by the religious police. Or they could go for a walk, but there too they have to face... you get the picture.

What is deeply refreshing about the film is that it is not a glorification of Western values. The impetus is not towards a steamy backseat scene à la Titanic. In fact the characters only really ever touch once. Instead the narrative thrust is pointed at making a comment on the ridiculous restrictiveness of the Saudi system, one which is condemned as draconian by even the most conservative nations in the world. The love between the two characters is not even used manipulatively by the writer to get the audience to disapprove of whatever is holding them apart, as is the mainstay of romance plots from Romeo and Juliet through to Brokeback Mountain. Barakah and Bibi don't even know if they love each other. All they want is a fighting chance to find out.

Although the backdrop of an ultra-conservative society can be a downer, Barakah meets Barakah manages to be deliciously funny at times. The film opens with the words: "The pixelation you are about to experience is totally normal, and is not a comment on censorship. We repeat, it is not a comment on censorship." This tongue-in-cheek disclaimer becomes the source of great amusement throughout the film as elements on screen, like a glass of whiskey, are obscured even though it is blatantly obvious what it is.

The characters are fitting representatives of Saudi citizens. The nation is indeed filled with avid social media users – the kinds of celebrities that Bibi plays are as real as they are a release valve for a highly controlled society. Barakah, as a public servant, has his gripes with the taboos that reign, yet is content to continue working for that regime. All the characters recognise the nation's short-falls, but they have accepted them, and semi-contentedly live lives made possible by oil sales.

Sabbagh deserves great respect for not only pushing through considerable resistance in order to get a film like this made, but also for creating one that is hugely entertaining and edifying.