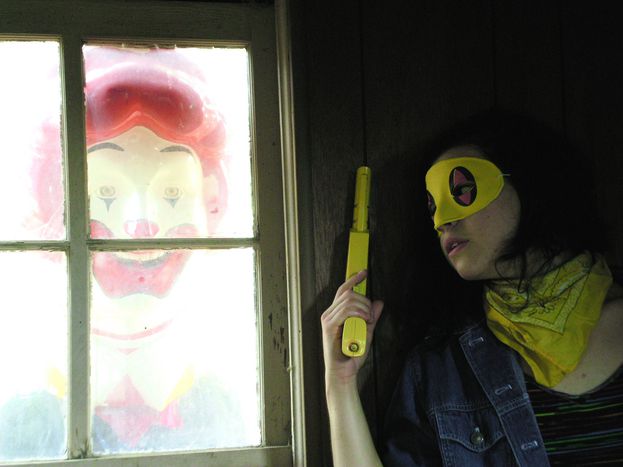 Sarajevo leaves the company of Tirana and Pristina to join the ranks of European capital cities with the opening of its first McDonalds on 20 July. Locals used to claim that the food here was so good that the American fast food restaurant did not dare to compete. In a world of evolving cuisine and lifestyle, how is the arrival of McDonalds in Bosnia different than that of just another restaurant?

As you walk the narrow stone streets of Bascarsija in the city centre, past the dogs lounging in the shade and the Roma children begging from restaurant to restaurant, clouds of smoke roll through the open doors and flood those streets, sifting through the tour-guided groups and the outdoor café-diners. A wall of grill-smoke may hit you head on, yet somehow it pulls you deeper into the old town. This is a well-loved cultural district of Sarajevo, and marks a stark contrast with what I remember of my last experience in McDonalds.

The owner of Mac Doner, a kebab shop just down the main street Marsala Tita from the new McDonalds location, thinks I work for McDonalds as an undercover agent when I pressed him on this important change. Maybe this is why he only has praise for McDonalds. ‘McDonalds is a sign of progress and development,’ he says. I’t will be good for Sarajevo.’ Another owner of a buregdzenica restaurant near the new McDonalds wants his name and business to remain anonymous, but reveals that there are two different markets for burek, a local meat or cheese pie, and burgers. ‘If people want burek, they want burek. There will be no substitute for burek at McDonalds.’

Gladne Oci (Hungry Eyes) is a fast food burger joint one block from McDonalds. Samir, owner and manager, greets us with a kind smile, a handshake and a gift of a cold can of Coke. He admits he nervously anticipates the new competition. Should his profit does take a sudden dive, he will not hesitate to relocate. ‘I opened this restaurant because I wanted to eat good burgers; I did this for my own tastes,’ he says, handing me a cheeseburger with the house sauce. ‘Go ahead. That’s the best burger in town.’

It'll always be the cevapi

Opinions of the possible effects of McDonalds on Sarajevo are mixed, but one debate is particularly interesting. Many people think McDonalds cannot, and will not, survive. ‘Look at the local food! It’s delicious. It’s cheap. You will have the option of a big-mac meal for six marks or an authentic cevapi. McDonalds cannot compete with that,’ says one Sarajevan cevapi fan, but there are many more who also believe McDonalds will have trouble competing with the local, semi-fast cuisine. 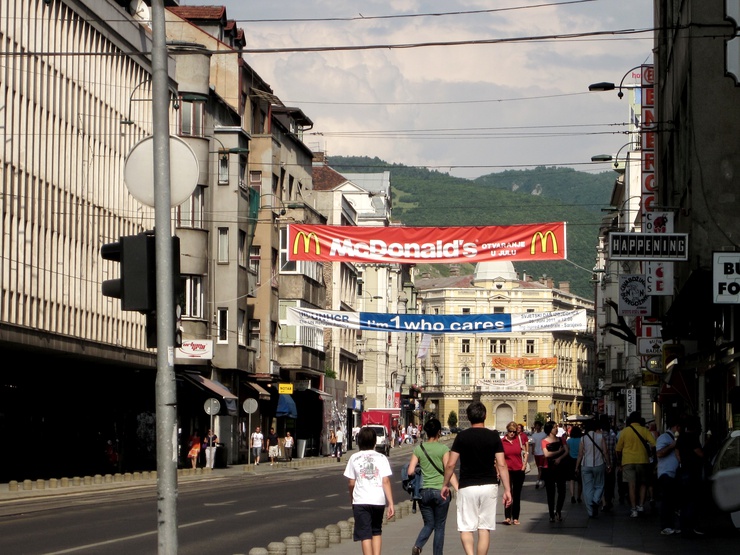 This morning, as I walked Marsala Tita while the rest of Sarajevo was still sleeping, and the new McDonalds banner fluttered a little in the cool breeze, I noticed the McCafé graphic pushed off to one side. It takes some imagination to visualise the people of Sarajevo strolling sidewalks while carrying paper coffee cups, golden arches clutched in sweaty summer palms. I have been here for two months and have only seen two cafes that advertise coffee to go. 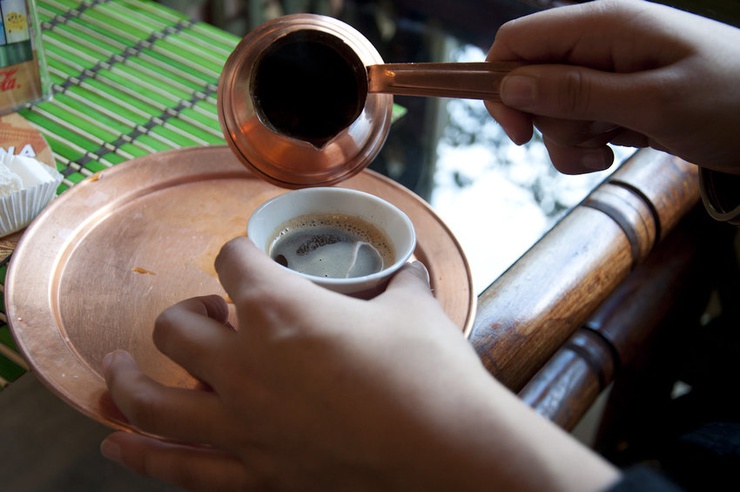 Coffee, cigarettes and conversation at a café is one element of the Sarajevo lifestyle that seems at least as sacred as cevapi. The experience of sitting down to enjoy the moment, maybe an hour, is just one manifestation of Sarajevans’ approach to life and time. Time here seems to pass in these moments, gaps absent of concrete measurement. It slips through one end of a burning cigarette, over the edge of a ceramic coffee cup, and comes to rest somewhere deep in the gut. With the grand opening of McDonalds just around the corner, only time will tell its effects. Consciously or unconsciously, McDonalds may challenge the very passing of these precious moments in the daily life of Sarajevo.

This article was written by North 'Amer' Campbell for the official blog from cafebabel.com Sarajevo