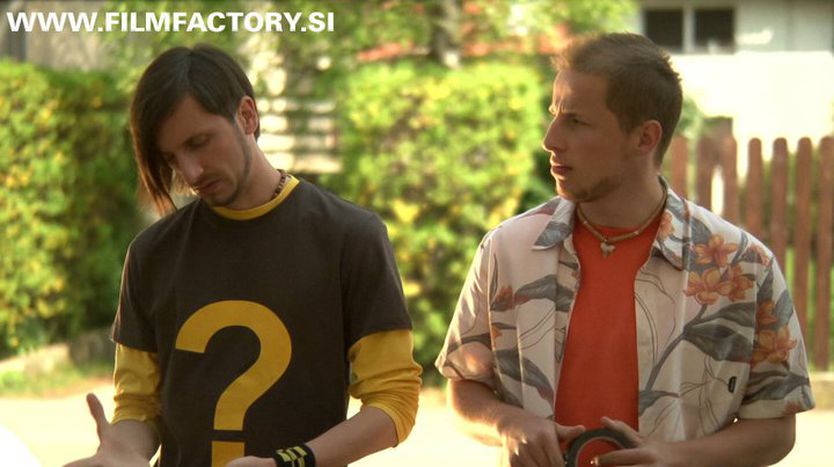 Between 6 to 10 December, the lobby of the Faculty of Arts in Ljubljana turned into the main venue of the International Student Film and Video Festival Filofest organized by the faculty students in cooperation with the Educational Center of Slovenian Radio and Television. Faithful to high organizational standards the film festival, besides the official program, offers a rich accompanying program : lectures, panel discussions, exhibitions social gatherings and other events.

The festival is open to all kinds of genres, from drama to documentary.

So, I shall start with a diplomatic introductory question. What is Filofest? Why choose a festival instead of lectures?

Well, Filofest is an International Student Film and Video Festival. This year is the festival’s third edition. This event was last held in 2007. Why films instead of lectures? Simply because our team thinks it is important to offer to the students a wide range of activities, especially during the holiday period. During the festival, students can enjoy the art of cinema and the quality achievements of their creative colleagues from all around the world.

This is not the first edition of the festival. What has changed compared to the festival’s previous editions, any new features and improvements?

This year we tried to offer a more round up, a more fulfilled program. Our aim was to organize a high quality international film festival. The crowning event of the festival’s opening day was the concert of the wind orchestra Krka: Motion picture music at the Slovenian Philharmonic. Like all the festival’s events, the concert was free of charge. Personally, I think that this festival’s edition was one of the best we have organized so far. We started from the foundations set by the previous team and continued to upgrade them as much as we could.

We started the preparations during January 2010. I assembled a team that during the organizational process remained almost unchanged. The team was divided into several groups each of them with its own assignments. For example, the group in charge of contact with participants sent the application form to more 6000 universities worldwide. Shortly after films began to arrive. We received 180 films from all around the world. A total of 111 films were selected and the official program was then divided into the competitive and non-competitive part. This year we also changed the proportion between amateur and professional films. About 60 percent of the films were in the competitive program whereas the rest 40 percent in the non-competitive revue program. In particular, we consider important to emphasize the independent production, since, unlike the professional production, the young amateur artists have very few opportunities to present their work to larger public.

The decision to give priority to amateur films from students, who are not part of the film academies, seems to me as a very bold and positive choice. Whose idea was this?

As I said before, the competition program includes only amateur films from students, who have nothing to do with film academies. We believe that film academy students have a great advantage before others. To include them in the competitive selection would be very unfair to the other artists. The festival’s idea is mainly to promote non-professional production as it has to be seen and therefore obtain more credit.

Filofest helps many young artists to enhance their creativity by presenting them to the larger public. What do you think would make the current situation even better?

Well, if I look through our festival, I can definitely point out the video workshop in association with the Education Center of RTV Slovenia. Four young directors had the opportunity to participate in the video workshop and produce short one-minute videos. They had 5 hours for concept design, 5 hours for shooting and additional for editing. This workshop is a very important experience and an excellent opportunity to work with a professional team. The young directors will most certainly benefit the useful tips and information from the camera supervisor and will use them in their future artistic creations.

For those who missed Filofest this year, what were the peak events of this year’s festival?

From the non-competitive part of the program, I would like to point out the projection of the Slovenian film Trieste is ours, by Slovenian director Žiga Virc, who was also a jury member. Here, I would also like to add the special projection of another Slovenian film Distortion. Podoba-Glasba (Image-Music) , the art of music video a project of Matic Majcen, postgraduate student of sociology, independent movie critic and founder and editor-in-chief of the project Podoba-Glasba (Image-Music). During the presentation, dedicated to his internet magazine for the art of music video, he also held a short lecture with the title From Aristotle to the Beatles : the prehistory of music video. The presentation was accompanied by a screening of music videos. The festival had also several useful lectures, among which I would like to stress out the lecture by prof. Miran Zupanič, a university teacher of film directing at the Academy of Theatre, Radio, Film and Televison in Ljubljana (AGRFT) . In his lecture, he focused on the working process of film directing. Some of the participants, those particularly interested about studying at the Academy, took an active role during the lecture.

’’The essence of Filofest is the quality selection of student’s films and the synergetic organization of the festival. What was a bigger challenge for you: selecting films or managing such a large festival? ’’

For me, the organization was definitely a major challenge. Within the team we formed a group that dealt with the film selection. The members were students, film enthusiasts with excellent knowledge of film culture and history and of course active in the Slovenian Cinematheque.

What does Filofest mean to you, as the festival manager?

(Smile) Above all challenge, and yes, in a way, sweet worries. But believe me, there is no bigger satisfaction for me, than to sit on the top of the lecture hall 34 and see, that the hall is full. All the things I gave up, the early mornings and all those sleepless nights simply pay off with a glimpse on that view.

To conclude; given the successful organization and the rising popularity of the festival, are there any advices you could share with other perspective organizers of new original festivals?

To the film enthusiasts I would just say: keep on filming and expressing yourselves, develop your talents. Filofest is an open festival and all the contacts you need are on our web page. Please feel free to contact us. To the organizers: Filofest is a festival organized by the Student Council and the Student Organization at the Faculty of Arts in Ljubljana. It is a volunteer project, organizers are not paid. All events are free and we always try to get as many sponsors as we can.

Considering the complex and challenging organization of the festival, the organizers were thinking of the idea of Filofest as a biennale. Of course, this idea has its pros and cons. The advantage is that the organizers will have enough time to prepare yet another quality festival concept. On the other hand, a biennale may be a difficult project to carry on and the festival might loose its regular audience.

The award for the best film of Filofest 2010 went to Neskončni vozel/Neverending knot (Slovenia) , which also won the best screenplay award.

Special mentions by the jury were awarded to the director Matevž Jerman (Slovenia) and the team that created Jolly Roger (Slovenia/Mexico).