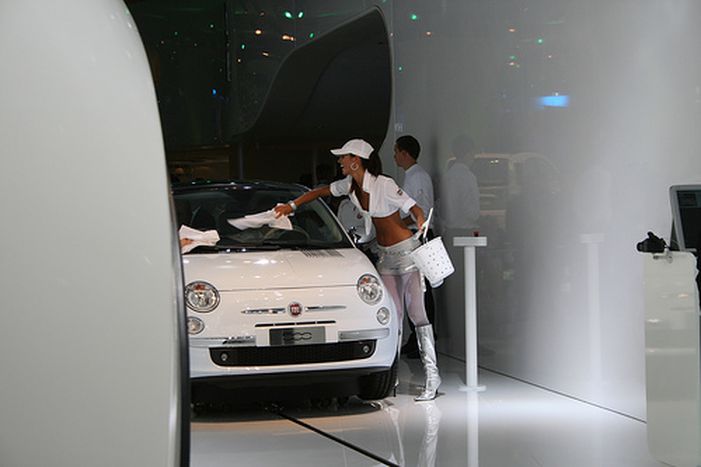 Fiat 500: inexpensive and successful despite the economic downturn

The car industry is in crisis, but Fiat has responded well with the successful marketing of a new product. The 'Italian Dream' now costs less than 12, 000 euros pr £10, 609 Marco is about to go for a drive in the new Fiat 500. He takes the keys and, while climbing in, he strokes the windscreen. 'The Italian Dream', he says and smiles before driving away from the dealer, Galdieri Auto, and vanishing into Salerno's industrial zone. The Mercedes and BMW engines at the retailers close by may make noise as they enter the straight road into town, but they are not really a threat. With the current crisis in the sector, it is the small cars that are laughing last, while the powerful multi-accessorised cars are left in producers' garages or parking lots.

A girl pulls up and gets out of a new white 500 with big pink, yellow and green flowers painted on the doors. 'It's so comfortable!' she announces, straightening her skirt, 'and it's good-looking, light and cheap.'

This could be the car's advertising slogan; in the current context of economic uncertainty, these are among the characteristics that have favoured sales of this car: compact and with a small cubic capacity, it is not too expensive, does not pollute very much and is looks good. Retailers explain the car's characteristics while walking around it and then sit into it. The spiel is that: 'the new 500 is a compact 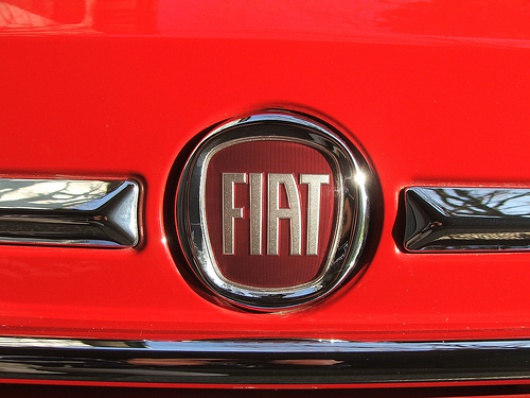 3-door model, uniting the family feeling of the most recent Fiat models with this model's distinctive new features.' The environmental selling points are: 'All the Fiat 00 engines satisfy the Euro 4 norms and already adhere to even the most severe restrictions of the future European norms (Euro 5), including the Euro 5 emission levels coming into force in 2009. Moreover, the 1.3 Multijet offers a Diesel Particulate Filter (DPF).' To top it all, payment is easy and attractively presented: 'With the '500 cents' offer, the client can personalise the car in over 500,000 different ways, but the rate remains the same: 5 euros (£4.42) a day to acquire various licensing and optional extras and accessories. With the '50to500' offer, the client can take the car after paying only 50% up front, and pays the other 50% over two years, without intermediate rates.' The price of the basic model starts at 10, 500 euros (£9. 280, in Italy the 500 NAKED model, which is stripped to the very basics and sold in other countries for under 10, 000 euros or £8, 841, has not been marketed).

'Last year, the target was initially placed at 120, 000 units, was raised to 150, 000, and was 191, 000 units by the end of the 12 months – much higher than the original target,' explains the manager Lorenzo Sistino. The press office of the Fiat Group speaks of having 'good luck' despite the crisis but adds, 'Certainly the 500 (produced in Poland, at Tichy) was a great success from a commercial point of view, but it is difficult to say if this, any more than the other models, is benefiting from the crisis that is hitting the economy so heavily. There have been far fewer new licence plates in recent months, in Italy and in other European countries.'

For this car, nominated as the Italian car that would face the crisis, in reality there is little to be done. It is the product of a participatory project in which potential buyers sent recommendations to a website as if they wanted to buy the new 500. The car therefore satisfies desires and is underpinned by a marketing strategy that is not really based on saving either money or energy.

It aims for the aesthetic tastes and style of the newer generations. Paradoxically, Fiat, which risked failure several times in recent years and made a turnaround thanks to Sergio Marchionne, the general manager of the Turinese group from 2004, who is considered to be the craftsman of the reorganization of Fiat Group Automobiles, has shown itself ready with this model in particular, to weather the crash in the sector.

The new 500 seems like a positive way to try to ride the crisis, but it is certainly not an escape from it. One need only look at the many Italian labourers currently drawing unemployment compensation, who no longer buy nor even produce the 500.