Feeling at home with art, all around Europe

In the springtime, the network of artists at Hors Lits decided to tranform Parisian apartments into cosy performance spaces for the public. Established by dancers some 12 years ago, it has become a European phenomenon. Munich, Brussels, Barcelona and Lisbon have joined in on the dance. Here is our story of the Hors Lits from under the covers.

Musical chants radiate from a ground-floor apartment in Paris' 10th arrondissement. Two young Berliners are singing opera pieces, decorated in green and pink tutus. Neon lights illuminate the backside of a small living room, where about 30 spectators stand packed like sardines. The audience exchange amused looks, but rarely stray their focus from the performance of the BaroqueBitches.

This act is part of a series of events organised by the Hors Lits network which took place in April. Established in 2005 by dancers from Montpellier, the phenomenon became European when cities such as Munich, Brussels, Barcelona, Venice, and Lisbon started to get involved. The concept? "An ambulatory journey across town, during which audience members visit four apartment in succession while giving full permission to the performance artists," explains Matthieu Sparma, a member of the Île-de-France network. As for the name Hors Lits, it stems from a solo dance piece that took place around a bed and was staged by choreographer Leonardo Montecchia, founder and manager of the team of artists. "It is an allusion to French idiosyncrasies like hors-murs and hors-séries which can at times be rather bureaucratic," explains the 45-year-old Argentinian artist. Today, the Hors Lits artists perform in about 20 towns and cities all over France. 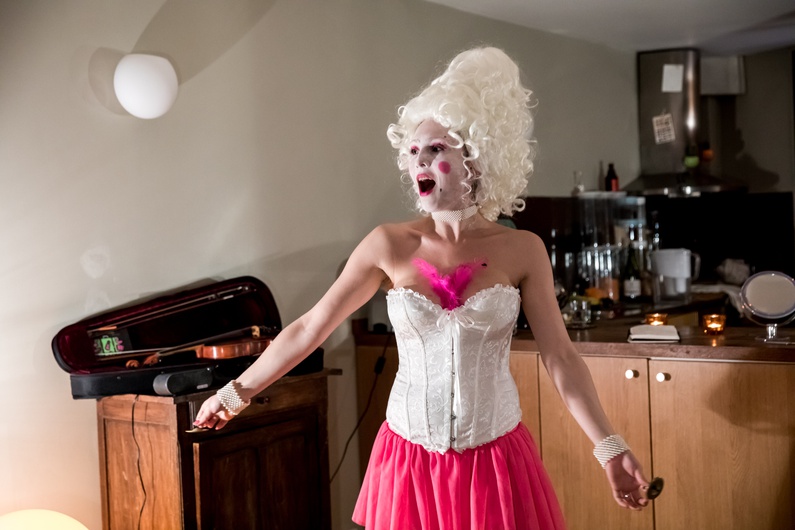 The second performance is a 10-minute walk from the first. "Walking from one Parisian apartment to another is great," Celica Corbet, a 23-year-old student, says while smiling. "Protest, protest!" people in the street shout while they watch the flock of spectators pass by. On the doormat of the fifth-floor apartment, the audience is asked to remove their shoes. The performance space, with its large and open floor, is home to a creative couple. She is a comedian and him, a violinist. Together they perform 'Ex-Nihilo', a philosophical inquiry enshrined in the style of "improvised and transient musical theatre," a 55-year-old musician explains. This is the duo's first attempt at a Hors Lit performance, as they were used to a more "conventional" scene. "The biggest challenge is the time constraints. Each performance must be no longer than 20 minutes," says the artist.

The rest of the action plays out in Parmentier in the 11th arrondissement. The scenery changes. Four people are sat in the main room of the apartment, facing the audience. Stirring music starts to play ("Blue Money" by the English rock band New Order). The protagonists want to get up from their seats, but something is holding them back. This scene reflects "those moments when you want to dance but you don't have the courage to get up and do it," the comedian Lucile Rey explains when describing her cathartic piece. "We try to make people see what they don't usually see," Roman Pichard, choreographer of the company, adds. The performance comes to an end. Actors and spectators get together and start to dance, watched discreetly by neighbours in their windows.

The Hors Lits audience continue their journey, making one last stop in the Saint-Ambroise neighbourhood in the 11th arrondissement. In the shadows, the flat is stacked to the ceilings with CDs and vinyls. As the audience gets settled, a young woman seats herself at a lunch bar, the office lamp softly illuminating her face. Dressed in formal office attire, she dives straight into a monologue. With robotic voices and bureaucratic vocabulary, the creative piece titled 'Everything that I am not' is a stream of consciousness. At the end of the piece the organisers, artists and audience members assemble in a bar. There is a convivial atmosphere, an almost familiar ambiance that embues the air. People make friends, exchange numbers and what they have to say about the performance.

From Europe to Mexico

A trained dancer, Leonardo Montecchia hopes to get a certain type of culture out of the current monopoly. He thinks that cultural policies focus "largely on politics, but not on culture itself." A mandatory contribution of 10 Euros per person is part of Hors Lits' charter. "The absence of a contract allows us to be entirely independent," Matthieu Sparma stresses. He believe that Hors Lits responds to a need, that of taking the audience away from the theatre. "We don't perform in theatres in order to make our shows more intimate for our audiences," he says, highlighting that "money needs to stay out of all that." The network is growing through word of mouth, but there is no real desire for it to become a massive phenomenon. 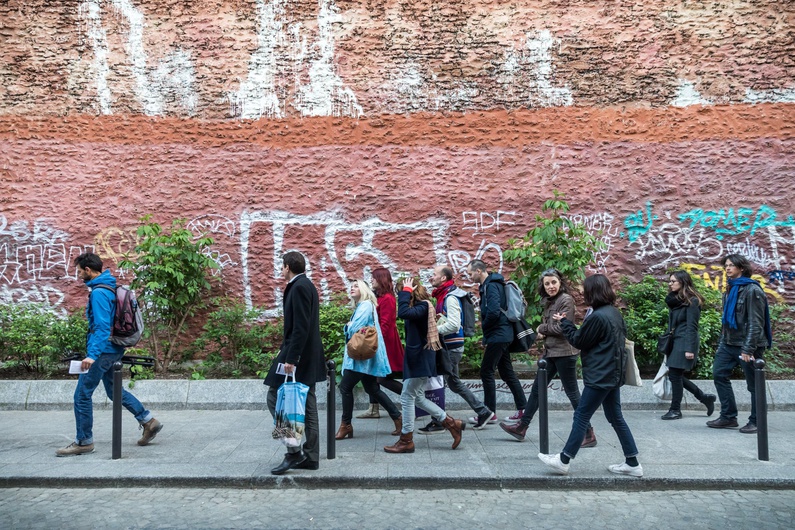 Starting with very little, Hors Lits has gotten bigger and bigger over the years. "There was little motivation when we first created the network," Leonardo recalls, alluding to his disbelief at how successful the project has become. "The idea was simply to create a performance, featuring a bed as a symbol of intimacy." Over the past five years, 18 towns in Europe have gotten involved as well as some cities in Mexico and Tunisia. Not wanting to let the popularity of his project get to his head, he tries to get feedback from everyone without giving them too much control: "I wanted the project to stay independent. In Barcelona, everyone wanted to get involved!" he concludes.

Today, Hors Lits responds to the varying needs of different countries. In Barcelona, the idea is to "provide an alternative space for non-Catalan artists to perform their work because there is a tendency for local artists to dominate the scene," Leonardo says. In Tunisia, Hors Lits has just launched its sixth edition. But this is a different setting. The art scene in Tunisia is expanding, especially when it comes to perfomances in public spaces. In a country that often uses art as a means of expression and political protest, the alternative space provided by Hors Lits offers more of an "act of being" rather than a political space.