Fear not the crisis because Greece is already lost

All these days people in Greece are angry. Really angry. Not because of the austerity measures that the government has to implement in order to cut off the expenses and the debt.

Some days before during a press conference, the representatives of the IMF, the ECB and the EU (notoriously known as the Troica) announced without any coordination with the government, that Greece is going to sell 50-billion-worthy public property. Some journalists asked if we should sell monuments to receive a negative answer from the Troica.

The Greek government reacted and announced that public property is not for sale- it can be used for growth but its not for sale. The politicians were outraged with the Troica while many people feel like if the country is..occupied! Some people who feel more ''patriots'' than the others simply upload videos of ..''resistance'' to the IMF and they are keep repeating the country's glorious past.

However a closer look to the events would reveal that most of these ''patriots'' have an eclectic notion of Greek history, were Greeks are always the good guys and the eternal victims of international plots orchestrated by ''eternal enemies'' like the Turks or the Zionists.. They keep comparing pre-national societies with the modern nation-state, they make vast generalizations while their ''big-fat-Greek language'' is full of mistakes.

Furthermore, an even closer look to the statistics of our museums proofs that our monuments aren't competitive enough! A great article by Sofia Voultepsi (in Greek only unfortunately) describes the route of the problem: that despite the fact that we ourselves underestimate and undermine our cultural heritage, like typical Balkans we shout to the one who tells us that the King is naked!

Tons of ink have been wasted for articles both inside and outside of Greece about the future of the country. Others say Greece will be saved others that bankruptcy is unavoidable. They are both wrong. Greece is already lost. 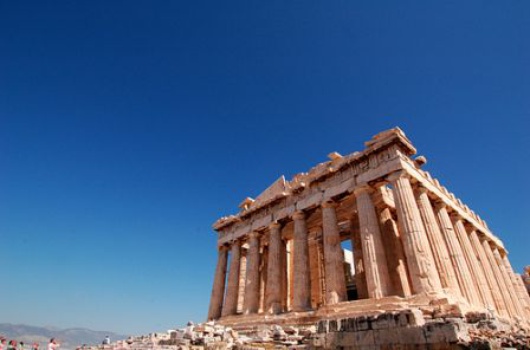 Greece is not about a branch of islands or some ancient ruins. It is not its mountains or its rivers. Greece is a cultural proposal, a proposal to think of the world through a different perspective. Its not simply a lot in the world.

This tiny place used to had man at it's center. Those who believe that the ancient statues and the ''byzantine'' icons are just artifacts have missed the point. Democracy is not just a system of government and the ancient drama is not similar to Shakespeare. What both the Greeks and the outsiders miss when they talk about Greece is the metaphysical axis of this culture, which is its cornerstone.

Greece became a state in the 1830's. However, before that Hellenism never disappeared. Under Roman and Ottoman control was able to survive, since its values were retained and its members were experiencing that culture. If tomorrow Greece is not a state anymore will Hellenic culture cease to exist? I am afraid so.

For Greeks in order to build up Greece again, they firstly need to re-discover themselves and throw out all these elements which led them here: corruption, the mimicry of the West, the absence of any control mechanism within society.

Greece suffers from a syndrome already described by the Roman senator Menenius Appius to his friend:

Note the arrogance and the pride of the Greeks. Make no mistake! They have the sensitivity of impoverished nobles. They used to dominate the world and now have fallen - but never to the point to forget who they were!

And this is the route of the problem: if Greeks want to be somebody in the world they have to re-discover themselves and bring up again their cultural proposal. Until this happens fear not the financial situation of the Greek state since Greece is already lost.