Fashion in Brussels, or…how to make a city shine

By Mauro Morabito Saturday the 25th of October, in the framework of the Designers’ Trail organized by the no-profit Modo Bruxellae, cafebabel.com Brussels organized a little space for discussion on the role of fashion in and for our most beloved European capital city. In the very cosy atmosphere on the top floor of Roi des Belges, in the heart of St. Géry district, we met with Mr. 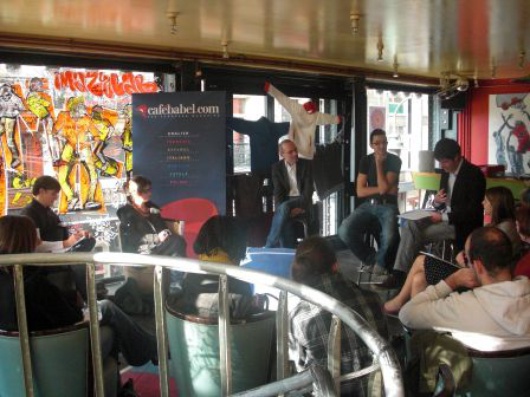 Our topic was broadly the experience and possibilities of European fashion, and more specifically the role Brussels could play in such a leading sector of cultural industry, where creativity made in EU can still outshine competitors and get ourselves a well-deserved place in the sun.

But alas! The first hard fact we are confronted with is the influence and status of Antwerp, already well-known and appreciated internationally as the true Belgian (and strongly Flemish) point of excellence for fashion. Brussels -we all know- it’s much greyer, dull, culturally pillaged by the undiminished floods of unscrupulous expats, a city wavering in such a feeble identity at a constant risk of fading out altogether. Or is it? No wonder Brussels is overshadowed at the moment by fiery and identity-strong Antwerp, notwithstanding the real interest and widespread commitment for fashion in its broadest sense that many do show in Europe’s capital. Including the no-profit association Modo Bruxellae, that managed to put up a Designers’ Trail worth of its title, with names like Nina Meert, Christian Wijnants, Gérald Watelet, Haider Ackermann and Marina Yee, sharing a little of their flair with our city.

Every city has to find its own key and way to speak both to the public and the cultural industry, says Sylvian Pasqua. And Brussels has all what it takes to make competitors sick and pale with grief. A humongous potential, building on its plurality of facets: Wallon, Flemish, European, but also Portuguese, Polish, pundit (in nearby St. Gilles district there are residents of 144 nationalities), with its numerous enriching immigrants’ waves, wild stagiaires and un-rooted eurocrats, the beer and fries capital (French nationalists would excuse us) has been constantly rebuilt from the 50’s, and has a diversity few other places can flaunt.

Also in clothing. From MEPs’ ties to students’ hoods, from hip hop context attires to saris, from veiled women to tourists’ shoes rambling around, “united in diversity” it’s an EU slogan who seems completely fitting.

A discrepancy might be found in the difficult path left to young creators. When Belgian Nour-Eddine Chafik wanted to launch it’s first collection, 3 years ago, he didn’t find attentive ears in his country. For FMR (inspired by the transiency of a butterfly -in French it reads akin to “ephemeral”), he had to start in France, and through different travels and explorations (Macedonia, China, Germany…) was finally able to interlink with individuals and associations. But at first, he didn’t find the help he could have greatly benefited from.

At the beginning of one’s career there is no way to get EU funds, says the young fashion developer. One has to show proofs of works accomplished, a real track record. “It’s only when I had gained already some recognition and experience that I was taken in consideration, that is to say, when I didn’t need it anymore”.

Of this problem is well aware Mr. Pasqua. The question is if there are sufficient tools at European level to aid the SME of cultural industry. Very often, in small companies it is extremely hard to combine together the management and the creative talents necessary to be active in the market, not to speak of the digital and ITC competences now needed in all sectors. This is where EU can make a difference. By investing in innovation, quality and creativity, DG Education and Culture seeks actively partnerships and a sustained joined action with other DGs, like TRADE and REGIO, and an intelligent use of structural funds, for examples in the Competitiveness and Innovation Framework Program. “The perspective has also changed considerably, we are starting to focus on the industrial component of the cultural sector, which is so crucial for the fashion industry”.

Our discussion continued touching upon many topics, the need of coherent policies for art education, promoting European creative potential; the initiative of a law consulting service made available for creative workers; the way in which city administrations (comparing experiences in London, Paris, Milan, Antwerp and Brussels) can invest in the fashion industry, and promote their role as fashion capitals.

The importance of having a possibility of dialogue among fashion operators, EU officials, city representatives and the general public is of course to leave the door open for further discussion, creating a channel and letting people be aware of the interest and wide scope of activities that are now offered to them.

It really seems that Brussels is ready for stepping into the fashion business!