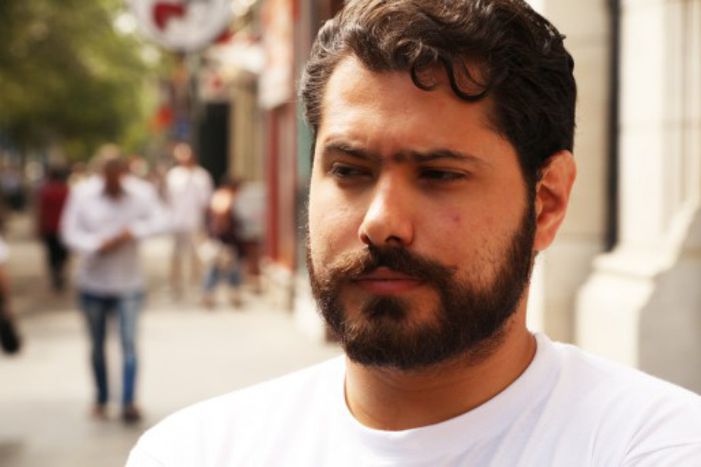 Far-right in Hungary: Meet the Wolves of Europe

The Bulli Tour follows our two reporters, Claire Audhuy and Baptiste Cogitore, to Hungary this week in order to know more about Jobbik, the extreme right, anti-European party; that could only do one thing better than others: talking about itself.

After the many outrageous declarations by Hungarian president Viktor Orban, especially the one about putting an end to liberal democracy at the end of July 2014, Hungary once again draws the attention of the European Union. For many years, the policies of the leader of Fidesz (namely, the party of Mr.Orban) have been denounced in the European media for multiplying anti-European actions and attempting to rewrite the country's history without any hesitation.

And the latest act of Orban in the news? The construction of a statue that could be rightfully qualified as revisionist, in Liberty Square in Budapest, the Hungarian capital. The monument includes a threatening eagle (Nazi Germany) attacking the innocent archangel St. Gabriel (the victimised Hungarian nation). Quite a simplistic representation of the history of World War II, during which the Hungarian fascist Arrow Cross Party collaborated with Nazi Germany by deporting more than 400,000 Jews to the camps, principally to Auschwitz.

For more than four months, the work of excavators was nevertheless slowed down, thanks to the surveillance of the citizens who kept guard so that the construction of this 'memorial' couldn't progress. Finally, the statue was installed on a Sunday night, at two o'clock in the morning. Since then, the statue is under police protection.

Some cupboards, shoes and stones that were left in front of the statue are the solid evidence of the disgust on the part of some Hungarians toward the monument. Through these objects and slogans, they attempt to remind others of the massacres that were committed by the Arrow Cross Party. The first anti-semitic laws in Hungary, which had determined quotas limiting the numbers of Jews in certain institutions, were promulgated during the 1920s, before they were imposed during the 1930s. So the Arrow Cross was undoubtedly an anti-semitic party, the ultimate collaborator who massively murdered the Jews of Budapest in the autumn of 1944.

This is far from being Orban's first attempt of revisionism. In 2002, when he was a minister, he established the 'House of Terror' which delivers a similar message: Hungary was just a poor victim in front of the attackers. Situated in a building that was used as the headquarters of the Arrow Cross Party and afterwards by the Soviet police, this museum attracts lots of tourists and eventually it only displays the terror under communism. By systematically presenting the image of Hungary as a victim, Orban makes use of national and anti-EU resentment.

"Nationalists but not chauvinists"

Even if the (right-wing) stance of Orban is revisionist, it is not the only one in the country. So, Jobbik (the far-right Hungarian party) also wanted to go to the 'ball of statues' in Liberty Square. Since 2013, a bust of Miklos Horthy can also be seen sitting enthroned at the parvise of a Protestant church whose pastor and his wife are active supporters of the Hungarian nationalists.

As the regent of the Kingdom of Hungary between 1920 and 1944, admiral Horthy sided with the (Third) Reich and fought against the Soviet forces before entering into negotiations with the Allied Powers in 1942. Between May and July 1944, the government of Miklos Horthy and the pro-Nazi Arrow Cross movement had deported more than 400,000 Jews, mainly towards Auschwitz. The admiral has stayed an excessively disputed historical figure within the country: while some consider him a collaborator and a virulent anti-semitic, others see him as the defender of Hungarians whose arm was twisted by Hitler. 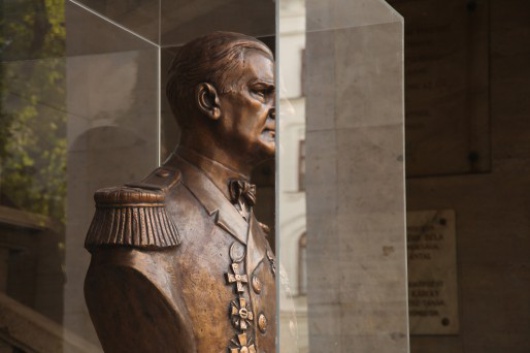 Officially, the statue isn't installed in a public space; however, it is directed at Liberty Square. After being exposed to painting attacks, the bronze bust is now protected through a plasticised glass panel. In order to better understand what Jobbik is, we decided to meet Ferenc Almássy, a 27-year-old French-Hungarian who decided to leave France a couple of years ago :

"I've been disgusted by the dominant corruption there. My future is in Hungary. Here, they give me my chance. And also it is crucial to establish a balance against all these young and barely educated Hungarians who leave the country to find jobs in the West. Hungary represents a reservoir of a cheap but well-educated labour force for Brussels and Paris. The Eastern countries are the colonies."

Ferenc Almássy proudly wears a glorious Hungarian beard. Since 2013, he is the advisor for French-speaking countries for Jobbik. The party knows how to attract young people, by arranging nationalist karaokes from time to time, or patriotic feasts where the glories of the missing Great Hungary (in 1920, at the time of the Treaty of Trianon, which had been called as a dictate by Horthy) are recalled in song. 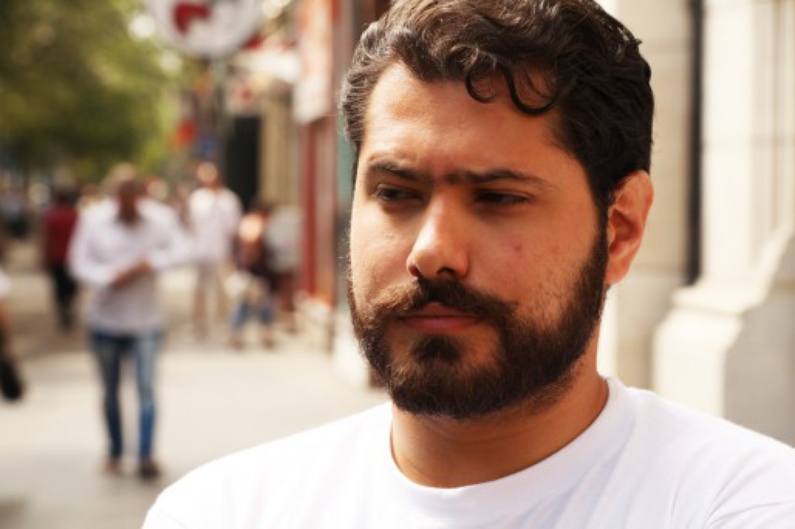 Disappointed with France, Ferenc Almássy only expresses his loyalty to Hungary. He hopes that the party is going to win seats in the next municipal elections that will take place in the autumn of 2014 :

"This will be the first time for Jobbik to win (the mayor's seat of) a big city. So we can show Hungarian people how we behave when we come to power. This will be an excellent experiment before other more important elections. The Fidesz cannot run without Orban. We are waiting patiently our turn to obtain control of the system."

The system is at risk of not being the same at all if Jobbik comes into office. According to the party, the country should leave the European Union as quickly as possible. "We have nothing to do with the far-right parties of the West (FPÖ, FN…) because they want to change certain things within the system. But we immediately want to change the whole system. We are a Magyar island in the middle of a Slavic and Germanic sea. We don't want either NATO or EU. With regard to the Roma, all of the advantages will be also abrogated. They will be citizens like anyone else."

Battalion of militias on the street…in 2011

However, it is necessary to recall the story of the little town called Gyöngyöspata, situated in the north-east of Budapest, where Jobbik's candidate won the mayor's seat in 2011, despite a controversy concerning the results of the elections. A battalion of a Hungarian militia has afterwards marched in the streets, along with the flags of Carpathians — former territories lost in 1920 — and the maps of the 'Great Hungary'. The militia bared its teeth, especially against the Roma people, by crying out slogans like: "The Gypsies are criminals!" 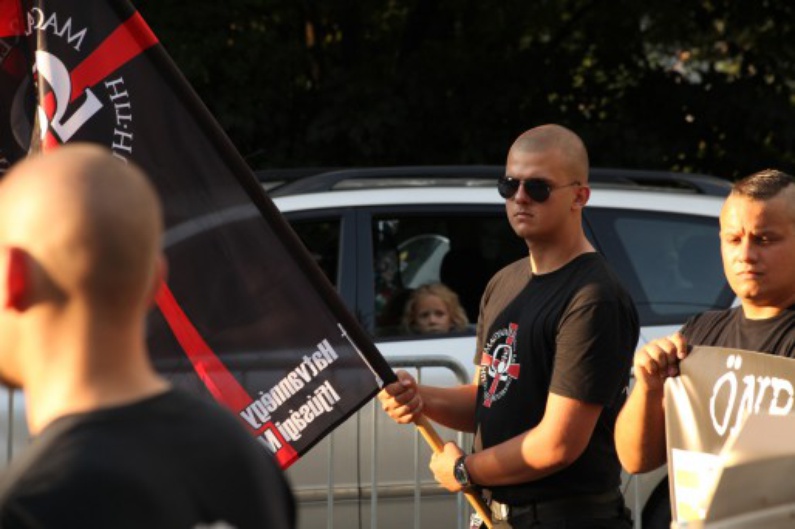 The skinheads of Jobbik make sure that we remember the less familiar face of the Hungarian extreme right. According to a French journalist in Budapest: "Jobbik stands at a turning point, like the Front national (National Front) did three years ago: it is looking for respectability, but also afraid of betraying its traditional base."

The young Hungarians who we meet are mostly tired of all these political affairs, as well as of the misleading declarations of the ruling elite. Settled in Budapest a short while ago, Joël explain to us that here, "when the young people talk about politics, they sigh. They feel frustrated, and sometimes, even hardly 20-year-olds give up believing in it."

At that point, we discover an engaging initiative led by citizens. The 'Dog with two tails' stood for the municipal elections in 2010. This genuine fake political party parodies the electoral programmes for exposing, in its own way, the lies and the corruption of the present ruling class. "If we come to power, the buses will be replaced with roller coasters." "Free beer for everyone." "Eternal life + 20 years (for the unsatisfied ones)"… Here are the slogans through which the leaders hope to draw citizens' attention.

The founders of this party are two Hungarian artists who aim to put things in order within Hungarian politics. They don't hesitate to create artistic performances in order to bring the dark corners of history to the light. Founded in 2006, the Dog with two tails already has 150,000 fans on Facebook. Tired of scams by different sides, they aim to raise awareness. 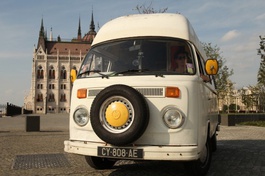 This ar­ticle is part of a interview series which were completed within the framework of the « Bulli Tour Eu­ropa » project, in which Ca­fe­ba­bel Stras­bourg participates. In order to check other articles, go to (www.​bul­li­tour.​eu).