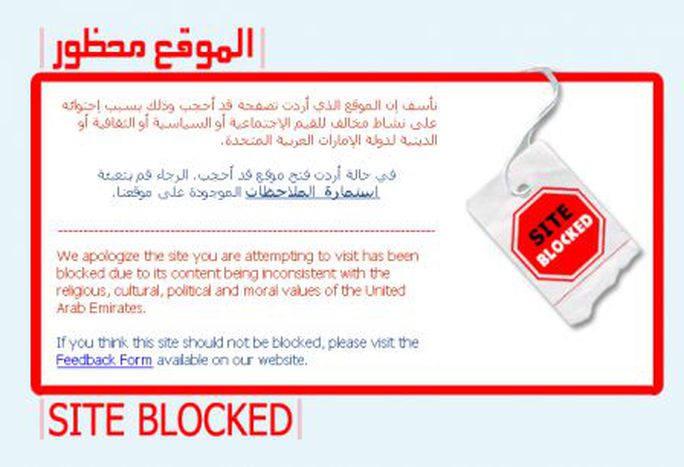 If you ever wondered what a death sentence to your social life looked like, it looks like this:

The site I was attempting to load was www.facebook.com. This message means that the website is blocked by the UAE government. Consequently, accessing my database of friend's emails, phone numbers and photos is now impossible. Bye bye social life...

When I first saw this banner 5 months ago I was shocked. Now I think that my standards of "what it means to be a free citizen" have significantly decreased. Step by step I just grew more tolerant of the government controlling my everyday life. And I knew it was coming...

Even though Etisalat was playing with the idea of blocking Facebook in October already, slowing down the website so it was pretty much impossible to get on, the event that really foreshadowed the blocking took place in December. A friend called me in great panic and said: "Did you hear, did you hear, they has just banned playing music outside!" I laughed: "Impossible!", called another friend who calmed me down saying: "It's just for this weekend, cuz the Sheikh of Sharjah has died and they want to honor his memory." So I was not worried, until...

...I bought the newest issue of the TimeOutDubai magazine (where you find all the info about Who? Where? and When? when it comes to clubbing, sports, dinning etc.) and there I saw a tiny little box on the side of the clubbing section. It read:

Outdoor music restrictions: The Department of Tourism and Commerce Marketing (DTCM) has re-enforced guidelines on al fresco music. It must not be loud enough to encourage people to dance. If you are planning to attend any outdoor events, phone in advance to confirm details.

And this was the end of two of my favorite bars in Dubai - out in fresh air, playing amazing electro and house music: Barasti in the Marina and 360 near the Burj (a ridiculously overpriced bar, which is proud to have a 360 degree view of the sea; yes - it means it's on its own little island).

On another note, I wonder how the Department of Tourism and Commerce Marketing felt about the New Year's Eve al fresco concert of 50 Cent in Abu Dhabi. I bet ya the music was loud enough to encourage you to dance ;-)

Then came the ban on smoking in malls and restaurants. I have to say I did welcome this one. However, you have to look at it for a moment from a civil liberties perspective. The UAE is 7th in the world when it comes to cigarette consumption per capita. The policy was not really disputed by the public, as for example the bans on smoking in France and Spain. It just sort of was announced in January and implemented on the 15th of the same month.

So Facebook had it coming. "Why?", you may ask. What makes a social networking website inconsistent with the values and beliefs of the United Arab Emirates. I suggest two main answers:

Because it is a dating website. In the UAE, dating websites are banned and thus people interested in finding the love of their life (or their love for one night) on the Internet have to resort to other means - like the Facebook. You can browse people in the UAE network, look for pretty faces, do some poking and message random strangers. Oh yes, I was getting quite a few of these, but then decided to make my profile absolutely private - now strangers can not even see my name appear as a search result. Also, you can clearly flirt with the people you know... Or have met just once - send messages, rate how hot they are, send them Facebook kisses, do anything to them through SuperPoke... Facebook does give you plenty of opportunities... And all this is against the moral and religious values of the UAE indeed. My values? No. My neighbors? No. But certainly Islam's and the government's.Because the national telecom monopoly was loosing a lot of money on text messaging. Now that I think about it, since all of my friends are on the Facebook, I hardly ever call or text anybody during the day. I use my phone only when I have already left the house, but the truth is I usually know where, when and with whom I'm going because I've set up my plans with them through Facebook. I think that with the amount of Facebook messages I send, they are saving about 5 dirhams a day on me. And I'm not even a social butterfly... Knowing that there are hundreds of thousands expats and UAE locals who use the Facebook in the same way, you get the idea about how much money the telecom was loosing... And you have 30 days in a month, 12 months in a year, Facebook is still growing, so you just calculate it for yourselves... I don't know at all whether or not that's the reason, but my idea is, tha t if you don't know what it's all about, it's gotta be about money.

So now. Somebody. Please. Set me up a proxy.