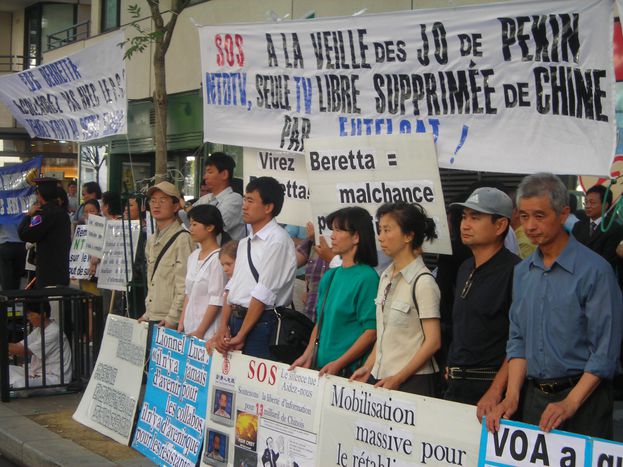 On the eve of the opening ceremony for the Beijing 2008 Olympic Games, independent news channel New Tang Dynasty (NTD) asks for its signal to be resumed in China, after it was interrupted on 16 June by the European satellite company

Approximately eighty people are present on 6 August to support NTD-TV (New Tang Dynasty). Their banners, ostensibly brandished in front of Eutelsat’s Parisian headquarters, are explicit: ‘Resume the broadcasting of NTD-TV before the Olympics!’ and ‘Berretta, don’t collaborate with the communist party of China (CPC)!’ 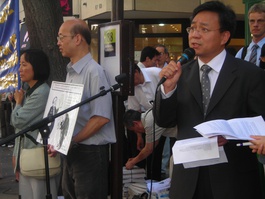 On 16 June, Giuliano Berretta, CEO of Eutelsat, interrupted the broadcasting of NTD-TV in China, pleading an irreversible technical incident on its W5 satellite. The independent channel, close to the spiritual group Falun Gong (outlawed in China), and followed by millions of Chinese citizens, is known to cover topics that annoy Beijing , such as human rights, the repression in Tibet, and reports on the ‘hidden face’ of the August Olympic games.

On 10 July, NGO Reporters Without Borders (RWB) denounced Eutelsat’s ‘premeditated and political decision on its website’, an ‘arbitrary cut’ destined to please the Chinese government in order to ‘secure new markets’. RWB also published the content of a phone conversation between a Eutelsat manager in Beijing and an interlocutor pretending to belong to the Chinese propaganda department: ‘Our CEO in France decided to interrupt the broadcasting of NTD-TV,’ the manager was reported to have said. ‘The Chinese government sent us complaints and reminders.

‘This matter does not solely concern China’

Two days away from the Olympics, NTD-TV is still hoping to solve the problem on ‘friendly’ terms. A series of speakers try one last time to convince Mr. Berretta to reconsider his position. ‘This is your last chance, Mr. Berretta,’ proclaims Joe Wang, head of NTD-TV in Canada, addressing the CEO directly, who may well hear him in the building across the street. ‘You have a golden opportunity to become a hero of the people and of freedom of information!’ Michel Wu, a former journalist for French radio RFI, does not hesitate to compare NTD to Charles de Gaulle’s radio addresses during the war. He calls upon the European satellite company to choose ‘liberty’ over ‘dictatorship and lies’.

However, the organisers are well aware that the small Chinese crowd gathered in Paris will not make a huge difference, and that international media interest in the matter would give them an important advantage. ‘Freedom of expression in China does not solely concern China, but the whole world,’ says Joe Wang. ‘China will soon be a major power. It is therefore our duty to safeguard individual freedom. You know very well that a great power deprived of liberty can quickly turn into a dangerous dictatorship in Europe.’

Joe Wang mentions the tens of thousands of messages of support the channel received recently, namely a viewer who compared the dissident channel to ‘fresh air without which one cannot breathe.’ Vincent Brossel of RWB and Jiang Wu, president of the China democratic party in France, successively denounce the ‘fierce repression of the Chinese authorities against the Falun Gong group’ and ‘the crimes against humanity committed by the CPC.’ 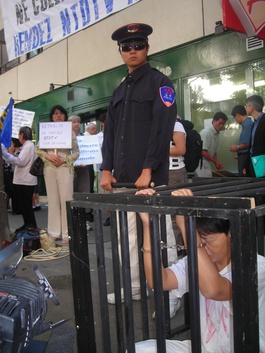 The demonstration of NTD supporters brings up a wider issue: that of the impact of the Beijing Olympics on the human rights situation in China. In one of its recent editions, The Economist noted that political liberties in China progressed despite the Olympics, not because of them. ‘China’s people are far freer now than they were thirty, twenty or even ten years ago,’ affirms the newspaper, but the Olympics have pushed China to ‘tighten the screws on dissent.’

European leaders are well aware that the Olympics will first and foremost be an expression of Chinese nationalism, and try to appear tough on the human rights issue without offending the Chinese government. Joe Wang concludes that ‘once more, one cannot trust the Chinese communist party.’ He promises he will continue to fight if CEO Berretta does not change his stance. The next demonstration has already been planned: it will take place by the Eiffel tower at Trocadéro, in Paris, on the  day of the opening ceremony on 11 August.