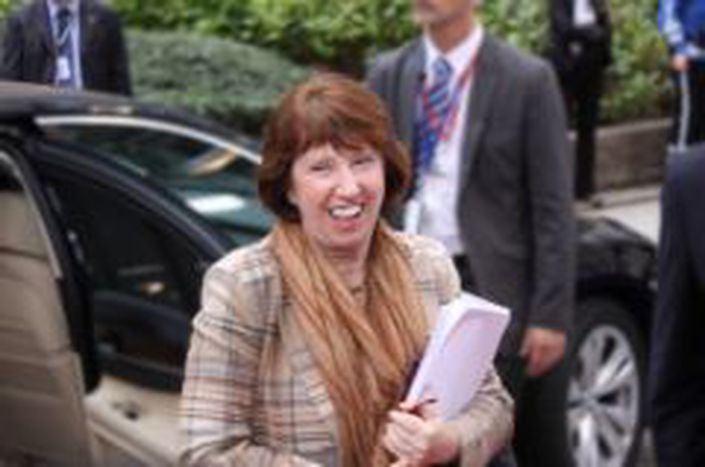 By Jeanne Heuré (Live from the Summit) Translated by Danica Jorden Photo by Milena Milić We were expecting heads of state to advance issues of Syria, Mali, China and Iran. At the end of the Summit, where are we now? Still and always the economy.

On the second day of the summit, instead of concentrating on foreign policy questions, the Union’s member states decided to discuss what was originally set for the first day’s agenda: evaluation of the Compact for Growth and Jobs adopted in June 2012. Even if heads of state or government did little more than corroborate the report that the European Commission had already distributed the day before the summit, they did however dedicate a large portion of their negotiations to questions about economic order, as well as effecting the financial tax. This was not a last minute summit, but a constructive meeting between political decision-makers, yet the European Union’s strategic position on foreign policy matters was not discernible.

International affairs is burning hot right now. The Syrian conflict continues to weigh on intergovernmental discussions, to the point that NATO was mobilised in extraordinary session under Article 4 to plan for member states’ solidarity in case of attack following recent incidents involving Turkey. In Mali, major danger remains for civilian populations and regional stability. Iran continues to be worrisome. China is waiting to be recognised as a market economy in international commerce and would like the arms embargo lifted. At a time when the European Union is to be awarded the Nobel Peace Prize, one question is still vexing: What is the EU’s position on the international chessboard? Few pertinent responses emanating from the European Summit. On Syria, the 27 members are unanimous, it’s true, but ‘unanimity’ here rhymes with ‘superficiality.’ Only the major decisions reach consensus, with no new ideas being brought to the table. As with Syria, the Mali question seems to depend solely on the UN Security Council, in which case a second resolution to intervene must be obtained. Talks on China among political decision-makers ignored political and economic arguments, instead simply promoting rebalancing commercial exchange and mutual investments. On Iran, nothing new.

Is the European Union reduced to speechifying? It is obvious that foreign policy is not Europe’s strong suit. As has often been mentioned, this component is a sensitive subject that member states have not yet afforded high level, supranational regard. Unanimity is a must for binding decisions and they are constrained by Europe’s limited room to manoeuvre, having no regional force and hardly able to reach common positions. However, the second pillar of the EU continues to develop over the last several years. The St. Malo accord between France and Great Britain aimed at establishing an intervention capability independent of NATO or, more simply, the creation of the office of the European Union High Representative for Foreign Affairs and Security Policy, are indicators of the reinforcement of European foreign policy. Then why do heads of state or government distance themselves from the stakes threatening international order? The question of how to exit the economic crisis took on primordial status during the summit and struck questions of “foreign” order off the agenda. Because the future of European integration depends upon resolving the present crisis, the question of the EU’s visibility on the world scene as a major player in international relations was set aside, even sacrificed, in favour of the question of the internal economy. To be continued.