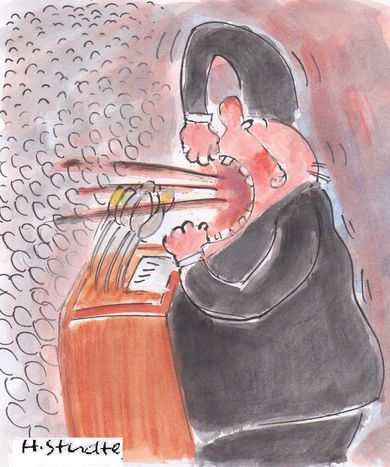 British prime minister David Cameron was accused of 'going offscript' by former foreign secretary David Miliband after a series of press conferences where he accused Pakistan of 'exporting terror'. Do Europe's eurosceptic politicians have the biggest mouths when it comes to diplomatic rows? Expression of the week

In July, British prime minister David Cameron seemed to contend with Italian counterpart Silvio Berlusconi in being Europe's most famous spaccone or gradasso. The Spanish would say that Cameron put his foot in it (meter la pata), whilst the Polish expression involves feet too - the PM literally stepped in the shit (wejść w gówno). The French and Germans translate directly from the term bigmouth (grande gueule,Grossmaul), whilst the Spanish imagination refers to a boquifloja (floppy mouth) or bocazas - literally someone who can't shut their mouth and talks without thinking.

For his part, David Cameron defends the 'loudmouth' charge from maybe a still-incensed opposition politician - David Miliband was forced out of power after labour lost the May UK elections. Cameron says he 'spoke clearly' whilst on an official state visit to India, historically a huge rival of Pakistan. The Pakistani government put it down to age, suggesting that at 43, Britain's youngest prime minister is 'immature' and might just have a few more things to learn.

But is it a trend that Europe's biggest loudmouths as also its most eurosceptic? UKIP MEP leader Nigel Farage was fined 3, 000 euros in March 2010 when he publicly accused EU president Herman van Rompuy of having the 'charisma of a damp rag'. Across the continent, Polish former deputy prime minister Andrzej Lepper makes for a surefire candidate as Europe's biggest krzykacz (pronounced 'kshicatch'). Sayings such as 'prostitutes are hard to rape' landed him into enough hot water (the Poles would say he burnt himself: spażyć się) that he has been formally charged countless times. In any case, Cameron still has a while to before catching up to the 'Teflon prime minister' nickname that the likes of Bertie Ahern, Tony Blair or Silvio Berlusconi share. After all, mud doesn't stick in politics.