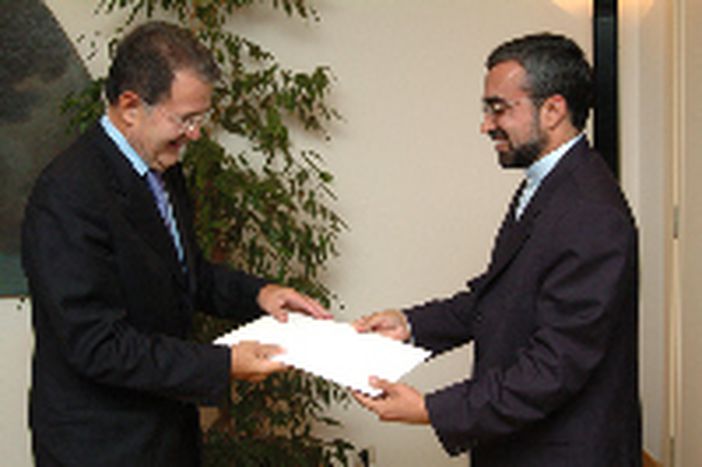 For Europeans, finding a diplomatic solution to the Iran crisis is crucial. Not least because Iran is home to huge gas reserves upon which we might one day come to depend

Let us recall the sorry situation Europe was in prior to the war on Iraq: the French President Jacques Chirac and the German Chancellor Gerhard Schröder were staunchly against military action, while their counterparts in Spain, Italy and Denmark could hardly pledge their support to George Bush fast enough. Europe was divided; the foreign policy of the European Union was a farce.

Now the crisis surrounding Iran’s nuclear programme is coming to a head, in a manner reminiscent of the situation before the outbreak of the Iraq war. Again experts are warning of the risk that a dangerous regime could get hold of nuclear weapons. And again the US government does not want to rule out the ‘military option’ in response. But what about Europe? In fact, there is an uncharacteristic show of unity within the EU. By late 2003 the UK, France and Germany had been placed in charge of negotiations with Iran. Since then this trio, along with foreign policy chief Javier Solana, has cut a decent figure on the stage of international politics, getting America, Russia and China on board and thereby significantly isolating Iran.

The EU’s consensus on the Iran issue is no coincidence. Unlike before the Iraq war, the European states are united by common interests where Iran is concerned. Iran is pursuing a nuclear programme that goes far beyond the peaceful use of nuclear technology. Intelligence suggests that the country is planning to build long-range missiles that could reach Europe. If Iran becomes a nuclear power not only could it support terrorists, but such a move could also trigger a nuclear arms race in the Middle East. In short, the stability of an entire region that borders on Europe could be under threat.

Gas from Iran into Austria

Aside from these concerns, there is also the matter of Iran being home to massive gas and oil reserves from which Europe stands to benefit. The country lays claim to the second largest stores of gas and the fourth largest oil deposits in the world. Almost a quarter of her oil exports go to Europe and Europeans are also getting more and more interested in her gas. At present, 54% of the gas used in the EU is imported. When British reserves are exhausted, this figure will be closer to 75%. At this point, Europe won’t want to be completely reliant on gas delivered by Russia, whose president is so keen to exploit his energy reserves for political ends. The continent’s energy companies have recognised this. In the past year, the German energy giant E.ON has fostered relations with Tehran in order to gain access to Iran’s stocks of natural gas. Iran has already been transporting gas down a direct line into Turkey since 2002. This gas should one day reach Western Europe via the East: the Austrian mineral oil company ÖMV is planning the construction of a 4 billion dollar pipeline – ‘Nabucco’ – running from Turkey to Austria across Bulgaria, Romania and Hungary.

Not for nothing has the EU, using its status as a trade power, been trying to tempt Iran with economic enticements. In August of last year an attractive proposition was put to Tehran; including the promise of preferential treatment in commerce and an extensive transfer of technological knowhow. It even allowed for a peaceful use of atomic energy in Iran. Nevertheless, the mullahs brusquely rejected the Europeans’ advances, leaving them to consider instead which card to play next against the Gulf state.

But Europe is running out of trumps.

Any oil embargo is out of the question, since the EU is dependent upon Iran for for a part of their supply, and the USA has no interest in driving world wide oil prices sky high, which would be the result of such an embargo. Boycotts on other goods could potentially backfire on Europe as well. The EU is Iran’s biggest trading partner, providing 44% of its imports. Furthermore, experts believe that the regime has long been building up stockpiles of medication and food which could keep the country afloat for several years.

That leaves the possibility of supporting an American attack on Iran’s nuclear installations, or even an invasion. However, Iran is an altogether tougher prospect than the already weakened regime of Saddam Hussein, and such an operation would be too high-risk. Europe is therefore persevering with its dangling of the diplomatic carrot. ‘We could help Iran out with our highly developed technology’, announced Javier Solana last Monday. This new offer even supersedes the suggestions made in August. Europe, now as before, is prepared to accept a non-aggressive use of nuclear energy, which would help the mullahs to score points with their own people. Iran’s technological gap is certainly its Achilles heel. The population is growing and the government needs to create up to 1 million new jobs. It won’t be able to rely on the oil and gas industry alone to do so.

This is what Europeans are counting on. They are hoping that Iran will not reject this latest offer and can thus be reintegrated into the international community. The Americans, who are yet to fix their position on Iran, it seems, are leaving them to it. If the EU’s tempting proposals are turned down, though, its policy on Iran will face a real test. There is a risk that the current consensus within the community could collapse. Certain states will want to take a more hardline approach to the problem, while others will insist on a diplomatic solution. Any breakdown of unity would be very dangerous, however. Only together can the EU member states protect their interests where Iran is concerned.