In the two days following the attacks in Paris, European newspapers covered little else. Five young Europeans reflect on the front pages from their country that left the biggest impact. 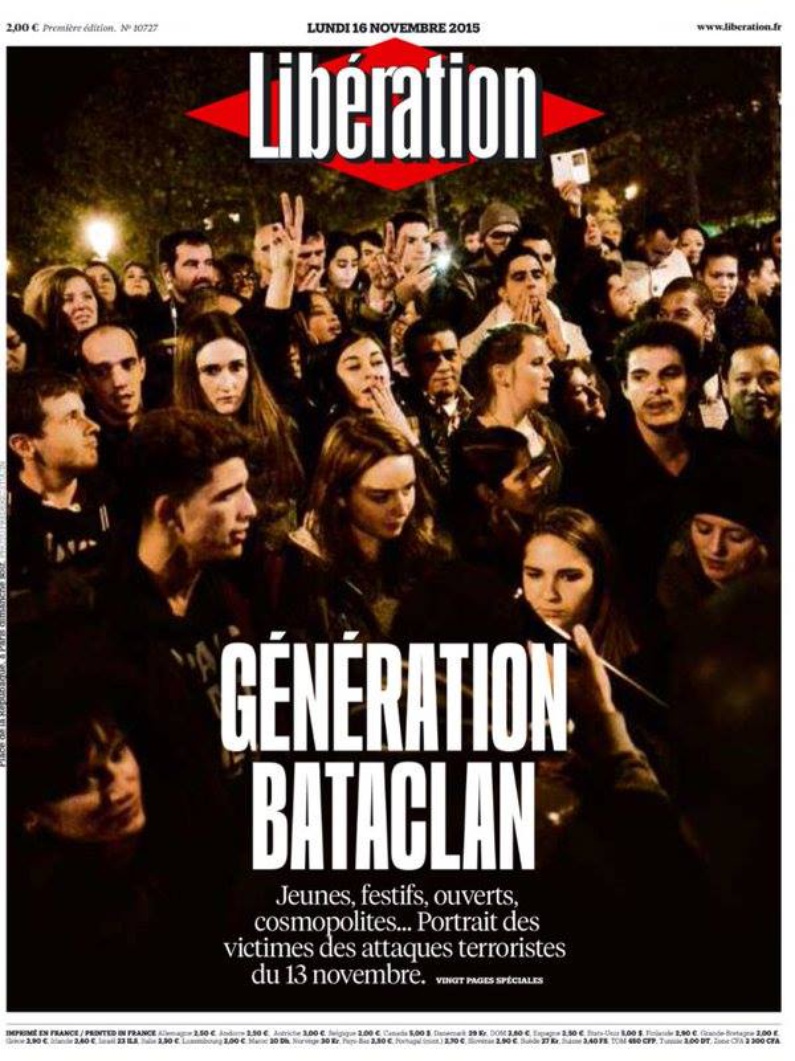 "I saw it Sunday evening, towards midnight. I was immediately hooked without really knowing why. If it was because Libé is a newspaper known for it’s front pages, or because I already related so strongly to the cover of their issue on the 12th of January 2015, following the Charlie Hebdo attacks, or because it is general the French daily for which I have the most affinity… I clicked “Share” and went to sleep. The next day, before buying the paper at a newsagent, I thought about it again. It’s my generation that is in the photo, with all its best qualities: full of celebration, cosmopolitan, free. “La génération Bataclan” speaks to me because it reminds me of my friends: those who listen to rock, who work in music, who don't sleep until the early hours of the morning. The people “who raise a glass.” Forgetting everything else, I felt that the front page of Libé spoke directly to me. Then, when I saw the twenty or so people who immortalized Frédéric Stucin on Sunday evening in Place de la République, I understood that it was speaking to us all.”

So what does "War" mean? 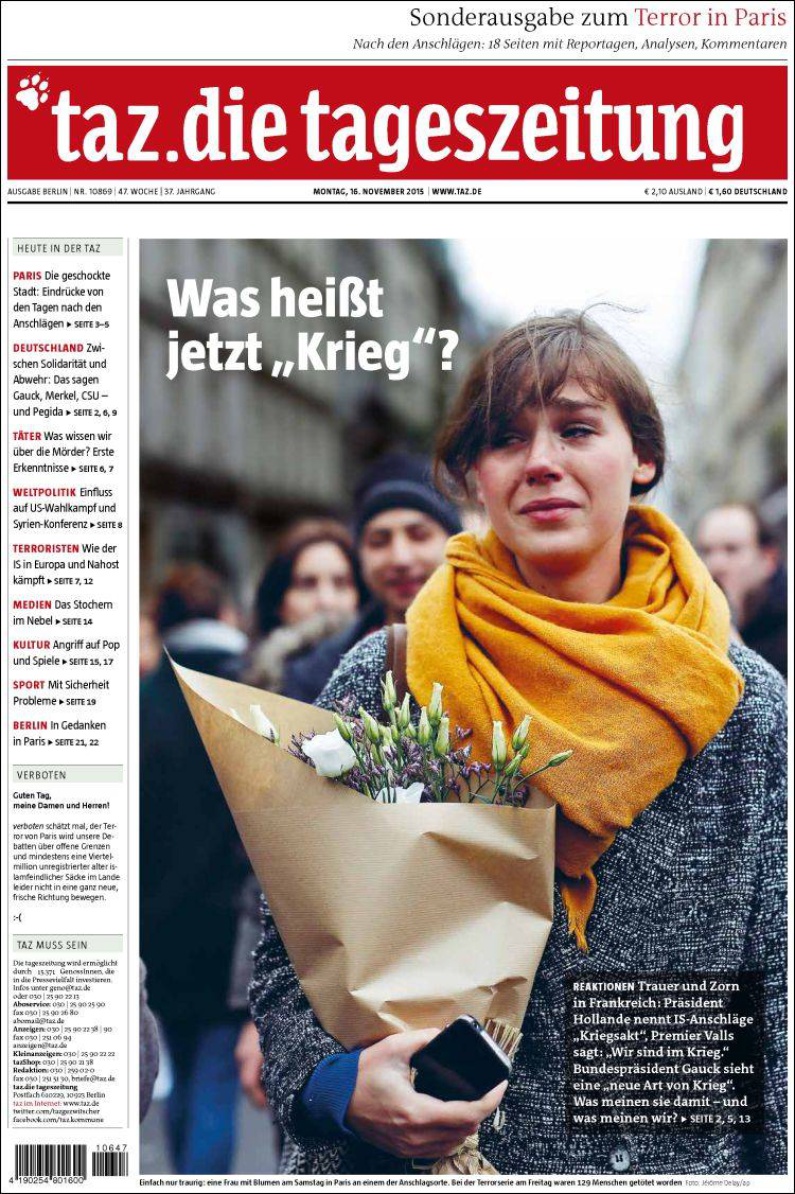 “The front page of the left-leaning German paper Taz spoke to me the most. Why? Because we see a young women who could have been sipping a beer on any Friday evening, on the terrace of any bar in Europe. We see her crying and holding flowers. Above all we see her holding her smartphone, a tool which so many of our generation cannot do without, and which we used so thoroughly to inform ourselves, reassure ourselves, and save ourselves (#porteouvert). Yesterday, I heard a eyewitness account on TV. A person who had been present at Bataclan who recalled the scenes of horror, of bodies laying still on the ground, covered in blood, of the silence of death, only to be interrupted by the sounds of telephones, stuck in peoples’ pockets. The front page of Taz poses a question to a generation, rightly marked by the fact that they grew up in peacetime: “So, what does ‘war’ mean?” It makes reference to political declarations, above all French, following the attacks in Paris. But it also refers to our incapacity – as a young European generation – to answer that question. What then, is war? We don’t know, we can’t comprehend it, we don’t want to understand it.”

An act of war 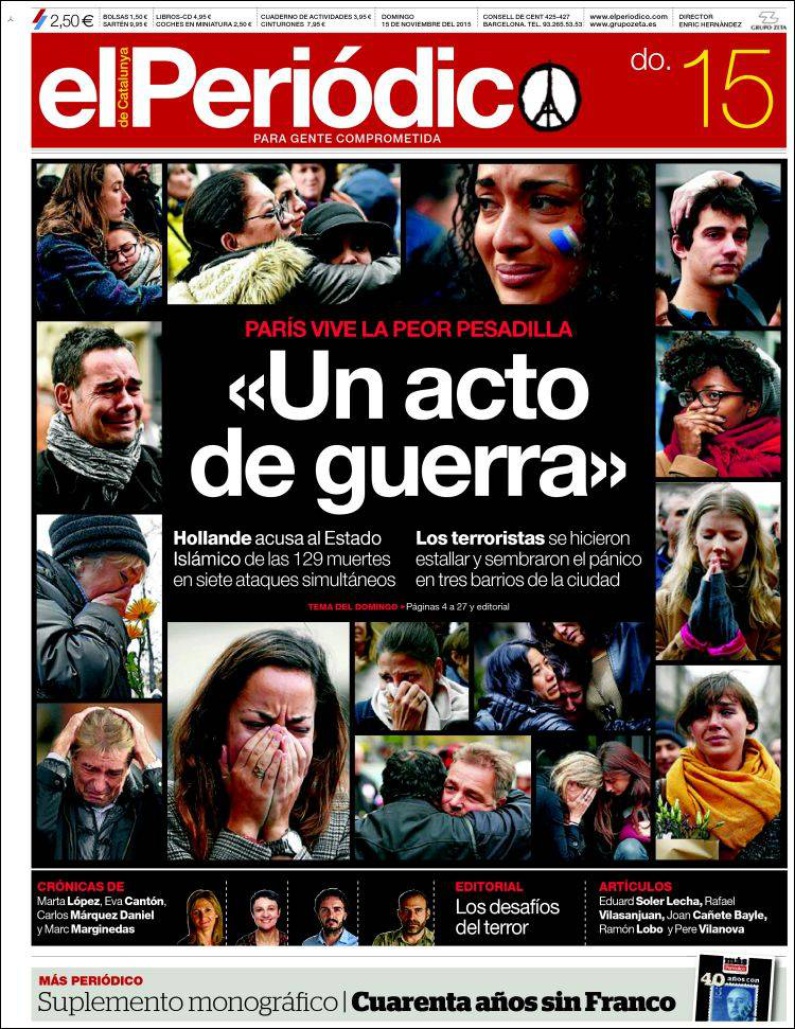 "Personally, I do not entirely agree with the idea of showing photos of people in tears after an event of such a magnitude as the Paris attacks. In general, I find the approach sensationalist and insensitive. But here, I feel affected by the year's events. I find that it reflects well the emotions that I could have observed following the attacks. It is not that the streets of the French Capital are full of people in floods of rears, but that the drama has affected everybody, without distinction based on religion, age or social status. Above all and as these photos show, the drama has affected young people. These attacks were aimed at us, and our way of life. It is us who cry from now on.”

Killed in the pitiless name of terrorism 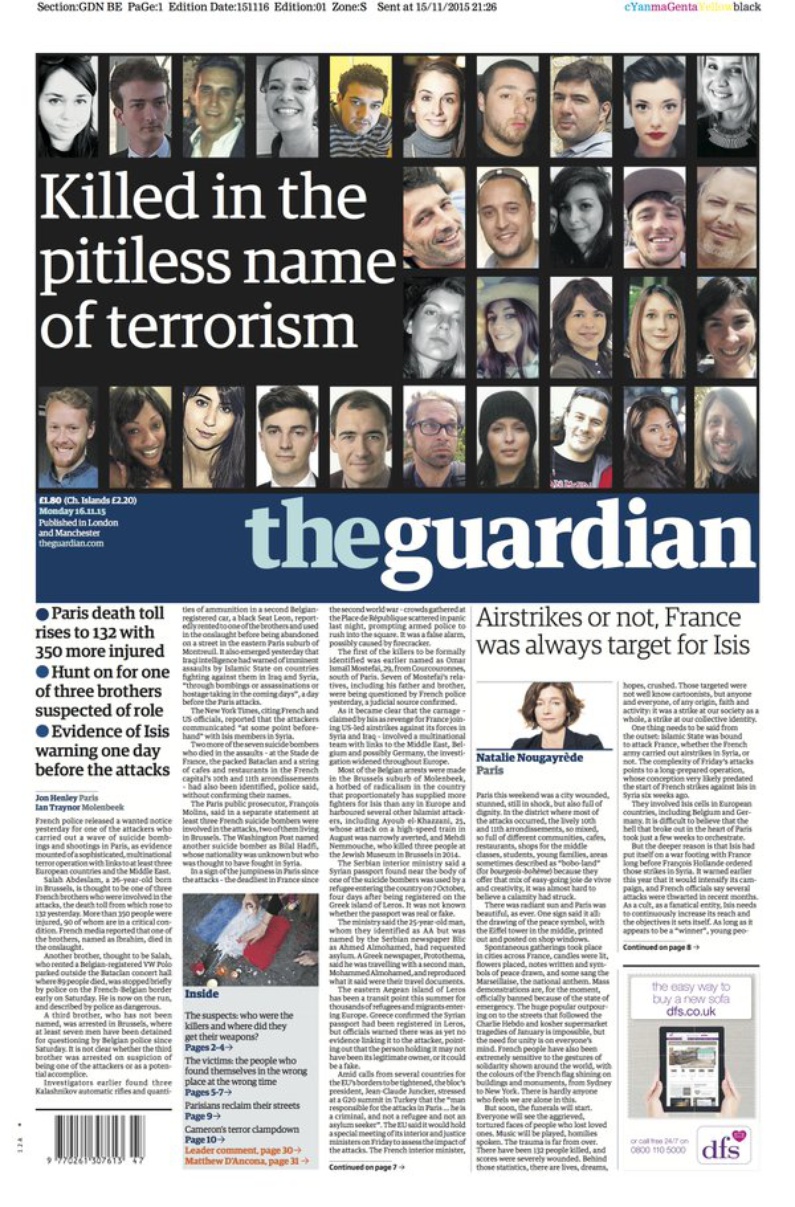 “I'm fed up of seeing images of death and destruction on the front pages of UK newspapers. Too often their coverage focuses on the people who carried out the attacks, and there is a worrying tendency towards sensationalism and Islamaphobia which does nothing but stir up further hate.Whilst much of the rest of the UK press highlighted the perpetrators of the attacks, The Guardian chose instead to focus on the victims. The faces of those killed in the attacks, multi-national, mostly young people; smiling at the reader from the front page, serve to remind us of the full extent of Paris’s most recent tragedy more effectively than a picture of a police office with a gun ever could.” 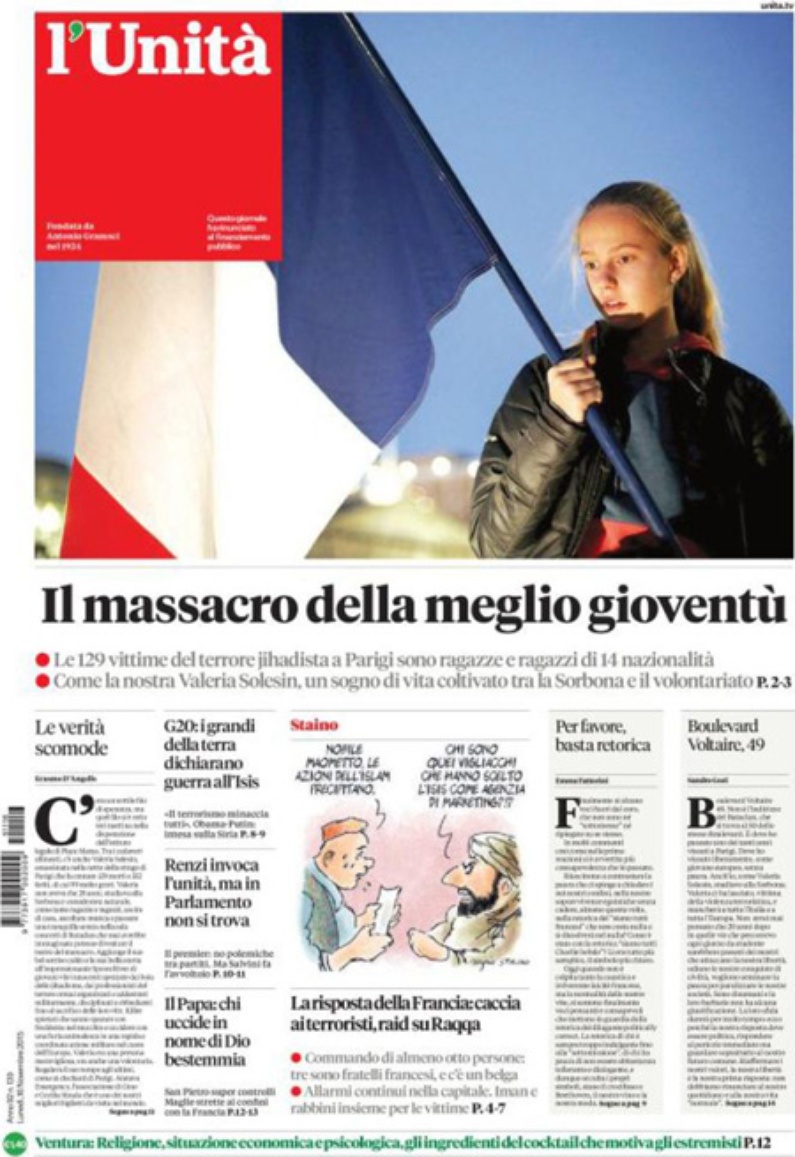 “Today, all the Italian newspapers gave over a lot of coverage to the death of Valeria Solesin. On Friday, the young woman was at the Eagles Of Death Metal concert at Bataclan. Then she went missing: a small glimmer of hope, followed by a sad confirmation. Some colleagues in the newsroom, or friends of colleagues, either directly or indirectly knew Valeria and the other young victims of the Paris attacks. L’Unita, is one of the rare papers to have decided to clearly highlight the “best of the youth”, the true targets of the attacks. More precisely, the terrorists have targeted the meeting places and the conviviality of the youth. Next to the nearly 130 people who have now died, we find the parents, the loved ones, the friends: an entire population affected like never before.”