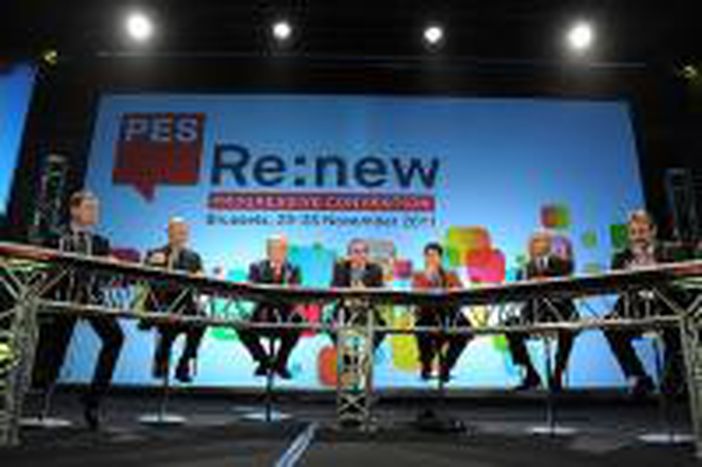 European Socialists on the crisis: It's the conservatives fault!

By Dominique Strzyz At a time when the markets dictate who is going to govern nations, when our democracy seems weaker and weaker, the Party of European Socialists organised a PES Convention last 25 and 26 November in Brussels. The aim was to give some impetus and support to European Socialists who are amongst the biggest political losers in the crisis.

Have they presented us with a credible alternative for these hard times, dominated by austerity doctrine and the prevalence of markets?

Actually, only very few European countries are governed by socialists (Ireland, Finland, Austria and Slovakia where they govern in coalitions, and Denmark. Maybe we will also count Belgium). The leaders pointed out that the socialists are being blamed for the recession and the mismanagement of the crisis what has happened in Greece, Spain or Portugal.

Poul Nyrap Rasmussen in his last speech as President of the Party of European Socialists, expressed his disagreement with the “Mercozy leadership of Europe” and “Wall Street Journal” as the modern Bible of the world. His speech seemed to put a new policy slogan, an attempt to counter a universal illusion of countries to have a “triple A” credit rating from rating agencies. He proposed to replace this note by the “triple T” of people: doing things together, together, together. His speech finished with commotion from the audience and tears from the ex-President.

George Papandreou, ex-prime minister of Greece, supported by European Socialist leaders, gave a speech being, as he admitted, “more free to speak now”. He made a plea to “reoccupy our democracy (…) left in the hands of few” and called up the democratic deficiency of rating agencies. He decried “petty nationalism” and “closed-door politics” up to conservatives’ rules. He claimed huge differences between conservatives and socialist and that Europe is now in hands of anti-Europeans while the citizens are left out.

Can we take from this PES convention more than political “bla bla” and all the emotional spectacle typical of such political events? The PES wanted to transmit a message of solidarity and hope for a change. The ideas that they put in their Resolution are reasonable, but do the PES and their socialist allies in member states have the power to promote them to government? The response for today is no, and the people are worried about lack of alternatives in the political spectrum. The message of the street movements was also presented on the Convention by Carlos Paredes from Real Democracy Now, Spanish organization who initiated the “Indignados” movilizations: we will reoccupy our democracy and defend our rights in the streets because behind all these closed doors nobody asks for our opinion.