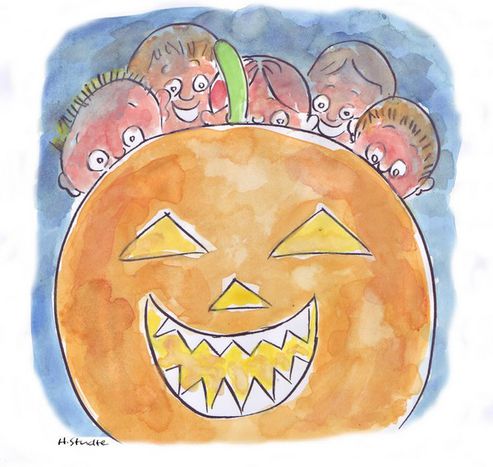 European idioms: a pumpkin this Halloween

Pumpkins in expressions can be saying no to a date in Spanish, being dumb in Italian or sleeping early in English - weekly language expressions

Some decry it as being too Americanised as a holiday, but its roots are Celtic. 31 October is coming, and Europe’s kiddies enthusiastically get ready for Halloween.  The little ones dress up in costume, decorate the house with sinister symbols and clean out pumpkins to make lamps out of them. They make themselves look quite the innocent fright as they take to the streets in the dark, to knock on neighbours houses and ‘trick or treat’. If no treat is given in the form of chocolate and sweets, they perform a pre-prepared trick.

Without pumpkins though, Halloween would be nothing. This week’s tower of babel is dedicated to the orange potato berry. Should a Polish child, for example, be quite mad were there no sweets for him at Halloween, he would give a header – the Polish word for pumpkin (z dyni

). His young French or German neighbours would insult him in response, calling him a pumpkin head (tête de citrouille

means being inept or ignorant - being a big pumpkin in Italian means you just don’t understand. The biggest hooligan wouldn’t think twice before launching a rock through a window without being seen. The imprudent little Italian doesn’t have salt on his/ her pumpkin (non avere sale nella zucca

As the night goes on, the bigger kids accompanying their smaller ones insist on going back home. The kids might protest: ‘you’re turning into a pumpkin

’ – referring to the popular fairytale Cinderella, where the main protagonist had to be home and in bed by midnight. On the walk back home, a young divorcee, daddy of a cute little seven-year-old kid, might try to hook up with a young mother of twins and try his shot at asking for a date. Were she Spanish, she’d give him pumpkins (le da calabazas