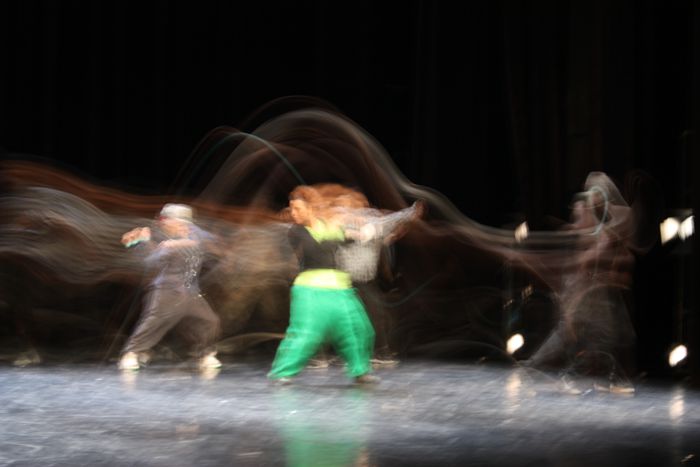 The opening of the 2011 Lezarts urban dance festival at Brussels’ centre of fine arts (Bozar) in mid-February was more relaxed and accessible than usual. We meet choreographers, b-boys and the folks at the European laboratory of hip hop dance

Mohamed Belarbi, alias Momo, is choreographer to the young stars contorting on the floor of the rehearsal room with a disconcerting ease for the tenth Lezarts urban dance festival. The founder of the Vagabond Crew Collective has been putting his time and skill at the disposal of the youngest for the last decade. Thanks to support from the European commission, the French association Banlieues d'Europe (the Lyon-based 'suburbs of Europe') has teamed up with Independance in the UK, Six Step in Germany and the Spin Off Company from the Netherlands to exchange their hip hop knowledge. Momo is in charge of a choreographic residence with a specially selected Belgian group who will hold masterclasses here. His b-boys are the 'second generation' of a movement born on the eighties party scene. Whilst the sport is challenging on a physical level, Momo insists that it is impossible for a breaker to make his movements without music.

Hip hop's identity absorbs rhythm and dance as part of an art in its own right. Yet if you were to bring up the subject of hip hop to the octogenarians on the corner, it’s more likely that they would provide you with all sorts of more stereotypical views, of delinquents, hoodlums and joint smokers amongst others. That's why it is a supreme paradox to attend the tenth anniversary of this kind of festival inside the centre of fine arts - a sacrosanct temple of art in Brussels in the most rigid sense of the term - to see honours being accorded to hip hop, a genre that most traditional art aficionados would tend to refuse.

Far from the chaos of the entrance, Momo says that hip hop is characterised by a collective spirit, the family. 'It's a really blended universe and there are no divisions of nationality, origin or colour, be it white or black, and there are some girls,' he explains. 'The only rule is the dance. Authenticity is important, respecting your own body and others. If the breaker is cool, watching them dance is enough to determine that form determines earning power.'

22-year-old Johnny reminds us that hip hop was born in urban neighbourhoods, built out of a desite to represent and protect them. 'To do that, you need a group,' he says. This partly explains more boys are prevalent on the scene. With two other boys from Team Schmettta, Johnny exudes energy, positivity and maturity, three illustrations of 'crew spirit'. Team Schmetta put together their own choreography, mix their own music, finance their own training and competitions abroad and reinvest what they earn to support their passion.

Chady, who trains with Momo, bumped into a breaker by chance when he twelve. It was a revelation for him and he has danced 'a little bit every day' in Brussels ever since, most notably in the Ravenstein Gallery. Today he is able to make a living out of it, which is an exception in a little recognised discipline. Hip hop is a real culture which draws b-boying, breakdance, graffiti, DJing and rap together all at the same time. There is a general dissatisfaction with stereotypes: hip hop is incorrectly associated with American gangster rap, gold chains and Rihanna and co.  'It works by generation,' explains Chady. 'You train with people who started at the same time as you and you form your 'crew'. It’s also a way to get off the streets.' Indeed, the clichés miss the point that this dance keeps many breakers away from urban violence. Whether hip hop is recognised also depends on the success of urban policies from which it is developed from.

'Hip hop at the Bozar shows that things are changing in the institutions,' explains Sophie, the coordinator of the workshop. 'The public has always been there, but the institutions have to continue to open themselves. We want to see more freestyle in the museums.' In Europe the hip hop industry is thriving in France and the Netherlands but still needs to be developed in countries like the United Kingdom and Germany. Meanwhile, the audience watches and takes their fill. The choreographic precision helps divine the asceticism of the pros. The coordination of the dancers varies between the rhythms of percussion it is set to, or to videos and a DJ, revealing the effort furnished towards the dance's artistic composition. This breath of fresh air does a world of good in the marbled atmosphere of the Bozar. An artistic revolution is underway; we'll leave it to the most traditional cultural arenas and the public at large to hop on the bandwagon.