The night that most centre-left governments took their batterings, you might have caught a show about an unemployed mother-of-two in Spain or the final of 'The Apprentice' in the UK. Glance at the programmes for which viewers gave up the EU election coverage ghost on the evening of 7 June; results came out at 8pm, signalling a lower voter turnout than 2004

The papers on the morning of 8 June talked about winning and losing, but not just about the EU elections. A third of the audience, peaking at 10.4 million viewers, tuned in to watch Yasmina Siadatan win the fifth series of The Apprentice in a 2-hour special at 9pm. The BBC called the series, where Alan Sugar chooses an apprentice for his business, 'the TV event of the year'. Sir Alan Sugar has been Gordon Brown’s ‘enterprise adviser’ since 5 June; maybe his upcoming seat in the House of Lords will arouse the public’s interest in politics. Meanwhile, reality series Big Brother kicked off on channel 4 the night after the UK voted in the EU elections, on 5 June. ‘It is sad that more 18 to 25-year-olds will vote for Big Brother than in the elections,’ said Bethany Usher, a senior lecturer in journalism at Teesside university

The catastrophic turnout in the EU elections thrilled less than the apocalyptic drama The Day After Tomorrow by Roland Emmerich, which got 3.04 million viewers followed by Formula 1 at 3 million. MTV broadcast six hours of the annual festival 'Rock am Ring', live from the famous Nürburgring racetrack in western Germany and featuring live sets from The Prodigy und Mando Diao. A polling station at the festival might have won over younger voters. Over in Austria, Die Presse reported that the special series TV-Pressestunden ('TV-press hours') featuring election candidates got few viewers and didn't rhyme with people's interests

Aída was the most watched programme on Tele5 as the centre-left government was battered on election night. The comic series chronicling the life of a single mother living in the hood drew in 23.3% of the ratings with more than 4 million viewers, in comparison to election specials which drew in 10% of TV audiences. The draw of public TV has to be in how it attracts ‘real’ stories of making it to the end of the month and having an unstable job

Europeans aren’t always so apathetic during election times; they like a good battle. What was at stake in the EU elections? Seats are important, but so is the public interest, says French TV presenter Claire Chazal as she explains why main channel TFI screened American shows and only devoted 10 minutes of election coverage time at 22.30. TF1 drew 27.3% of the audience at 9pm, France2 drew 17.6% of the audience with 202 minutes of coverage and France3 grabbed 14.8% at 11pm. Meanwhile French photographer Yann Arthus-Bertrand said that the 5 June screening of his eco-mentary Home influenced the green's success at the EU elections, drawing 33% of the audience (8.3 million)

Viewing figures indicate that from 8pm onwards everyone was watching election-related news programme EU-Valvakan on public channel SVT2, only straying to catch cookery programme Vad Blir Det For Mat and French Open highlights, according to MMS.se

Movie night in Hungary and Lithuania

... whilst Bulgaria got all Lord of the elections 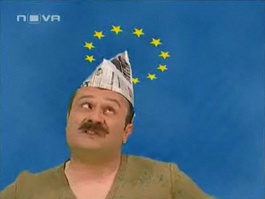 The viewer ratings were equal between the official Elections for MEPs 2009 (Студио: "Избори за еворпейски депутати 2009) on BTV, and the comic sketch show 'Lord of the Elections' (господари на изборите), which screened on Nova TV, the two biggest channels. A midnight press conference was consecrated to the upcoming national elections due on 5 July. The socialist prime minister set the mood: ‘these EU elections were only the first round, a rehearsal, for the real elections’