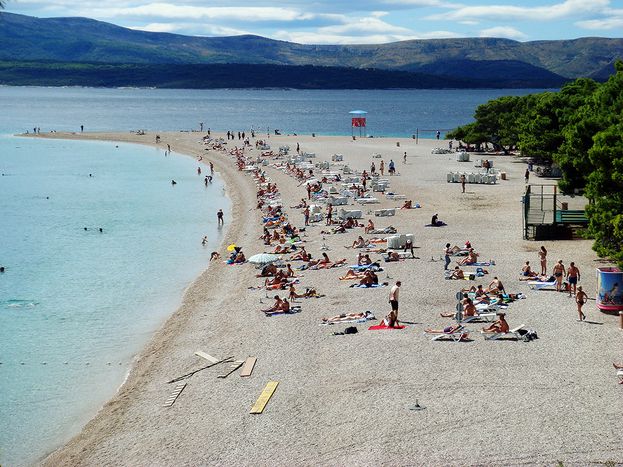 European beaches, from the Croatian islands to the Black Sea

Crossing via the urban sands of northern Europe to the fun-filled southern Salentine peninsula – there is a stretch for all those who want to try something new, even in the capital

Home to extraordinary settings, some coasts and forests still exist where almost nobody has yet set foot. Reasonable prices and a variety of attractions are two of the reasons why Croatia has been experiencing a hectic tourist season, with an increasing number of young people choosing to go there on holiday. There are approximately 1, 200 islands off the Croatian coast, the smallest being Brac, home to a very special beach called Zlatni Rat ('Golden Horn'). It consists of a thin strip of sand and very fine pebbles which reaches, like a tongue, almost 500m into the surrounding sea. A unique phenomenon takes place: the strip changes shape almost daily: marine currents, the wind and the waves make it curve to the right and to the left in turns

Salento, the tarantella in the shadow of the heel of Italy

The Salentine peninsula, known as the heel of Italy, extends across the southern part of Puglia, between the Ionian and Adriatic Seas. For a few years now it has been the destination for ‘youth holidays’, thanks to its uncontaminated beaches, genuine sea cliffs, country feasts and sunny villages. The biggest draw is the traditional regional Feast of Taranta where the pizzita or Tarantella dance takes place. It originates from beating a rhythm in rites which claimed to cure women who were thought to have been bitten by a ‘tarantola’ (tarantula spider), thus giving the name to the popular dance

Even when Black, the Sea is beautiful

But let’s not allow Europe to claim all the beaches. Thanks to its beautiful scenery and reasonable prices, Bulgaria has witnessed an explosion in the tourist trade in the last few years. The Black Sea coast is invaded during the summer and offers a very lively nightlife. Nesebăr, a showcase city off the coast, is connected to the mainland by a strip of land and is one of the most popular areas to visit. In 1983, thanks to the rich cultural meeting of Hellenic, Roman and Orthodox cultures, it was declared a World Heritage Site by UNESCO

In the fresh Baltic

It is only recently that the beaches of Latvia have proven to be of interest to travellers who would not have thought of the Baltic as a destination. The Latvian coast extends 497 km along the Baltic Sea and the Gulf of Riga. The sea might not be as warm as the Caribbean, but you can enjoy the coast without being swamped by summer crowds. As well as Jurmala Beach, very close to Riga, you can find Liepaja almost at the edge of the country, the most hippy location in Latvia, frequented by musicians and bohemian artists

The fashion for artificial beaches in the city is spreading to Europe's capitals. Copenhagen offers Copencabana and Amager Strandpark (built in 2005), situated only 5km from the city. These beaches face a lagoon, and are connected to the coast by three bridges. Thousands bathe here in the clear sea water, playing beach volleyball, taking a picnic and indulging in other water sports, just like the real thing. Better known are the Bundespressestrand on Berlin's river Spree, and the Paris Plage on the river Seine, which for years has brought relief from the heat in the shadow of the Notre Dame