On 15 December, state leaders and EU officials concluded talks regarding an association agreement with the Ukraine, which was rejected in a referendum in the Netherlands. To say that this has raised a few questions would be an understatement.

"Aftreden en wegwezen" ("Resign and go"). This pithy three-word tweet sent to Mark Rutte, the Dutch prime minister, characterised the reaction of the infamously inflammatory populist Geert Wilders after talks were concluded with the European Council. At first glance, this was not a surprising reaction from government opposition, and even less so by the leader of the (Party for Freedom PPV); from whom we are used to even more sensational comments. However, this message had a clear aim in mind: to derail the EU's association agreement with Ukraine.

An agreement long in the making

To comprehend the thorny nature of this agreement, it's wise to take a step back to look at its complicated history. The agreement, which included free trade and the relaxing of visa conditions, was originally negotiated between 2007 and 2012 by the EU and Ukraine, and was expected to be signed on 21 November 2013. Victor Ianoukovtich, the then Ukrainian president and russophile, decided to not sign the agreement. This led to widespread protest and unrest at Maidan, his eventual exile in Russia and the ascension to power of Petro Porochenko, who was much more inclined towards greater co-operation with the European Union. It was then that the former "chocolate king" and new president of Ukraine re-initiated the process and the agreement was signed, twice, on 21 March and 27 June 2014.

The European and Ukrainian parliaments ratified this political and economic agreement on 16 September 2014. However, as an EU agreement, it must be signed by all 28 countries of the Union. It was at this crucial point that things took a turn for the worse. Due to its national laws, the Netherlands was forced into holding a referendum on the question of the agreement, following a petition signed by thousands of citizens. The following year, the Dutch people voted to reject the agreement on 6 April, despite a low turnout of only 32.2%.

Of course, the referendum was only advisory. Nevertheless, it put Rutte in an impossible situation, forcing him to declare that "the agreement could not be ratified in its current form." 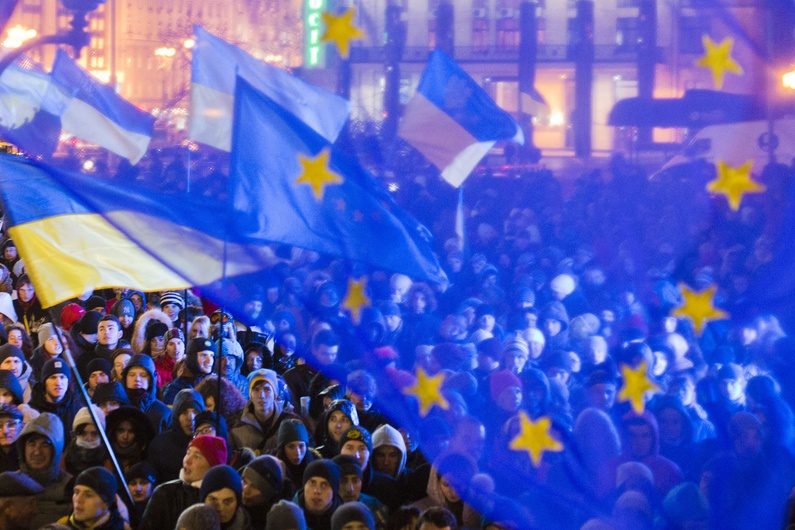 Negotiations continued, but although political decision-makers and citizens remained confident, everyone agreed that it was impossible to ignore the results of the referendum. Xavier Bettel, the prime minister of Luxembourg, confirmed this when he arrived at the European Council. "I'm convinced that we will arrive at an agreement about the Ukraine. We have to respect the Dutch referendum and we will find solutions that will allow us to clarify the relationship between the Ukraine and the EU. I'm certain that by the end of today, we will have an agreement that every member state will be able to sign."

Finally, at the end of the meeting with state leaders and the government on 15 December 2016, the option chosen by the different leaders did not differ from the original agreement that was rejected a few months earlier by Dutch citizens. The Dutch Prime Minister spoke out on the issue a few minutes after the end of the meeting. "It wasn't easy and it wasn't pleasant but this was necessary to ensure that the European Union continues to present a united front against Russia's destabilising foreign policy." A few political guarantees were given to the Netherlands: most notably that the agreement does not bestow upon the Ukraine the status of a candidate country to the EU, and the agreement does not contain a guarantee of collective security. However, these minor guarantees do not constitute a judicial change to the first draft of the agreement, which did not make the Ukraine a candidate country to the EU. As it stands, the agreement has yet to be signed by the Netherlands before coming into effect.

By adopting this agreement, the EU could be providing ammunition to populist parties across Europe, above all in the Netherlands. An agreement whose principal points were rejected by the people (regardless of how low the turnout was) could fan feelings that the European Union is authoritarian, alongside other criticisms of TECE and the Lisbon Treaty. In a context of growing Euroscepticism and just a few months away from a French presidential election with very high stakes, this agreement has not come about at the most opportune of times.

On the other hand, do leaders really have any other option? After the past three years of diplomatic arm wrestling with Russia over the Ukraine, and now that the Ukrainian government is recognised by the international community and the majority of the population of western Ukraine want greater co-operation with the West, can they really stop this agreement? Or will they have to instead try to appease tensions with Vladimir Putin and Ukrainian separatist movements? At the same, many observers agree that the vote in April 2016 was not a vote against the Ukraine, but rather against the European Union. In this case, maybe adopting the treaty was not as inappropriate as it once seemed.

Another important factor to consider is that this is the second treaty of 2016 that has posed serious questions about the process of making international agreements with the EU. After a spell of to-ing and fro-ing amongst EU leaders over CETA in an effort to appease hostile public perpections in Wallonia of the trade agreement with Canada, which in reality changed nothing in the agreement, it seems that now it's the Netherlands that is causing problems. Some may argue that the preservation of democracy is necessary above all other concerns, and that ignoring millions of citizens vetoing the agreement evidences the weaknesses in the democratic process. However, these decisions pose questions about the capacity of the European Union to handle and ratify agreements as they currently do via all EU member states. Maybe it's time we give more decision-making power to the EU?